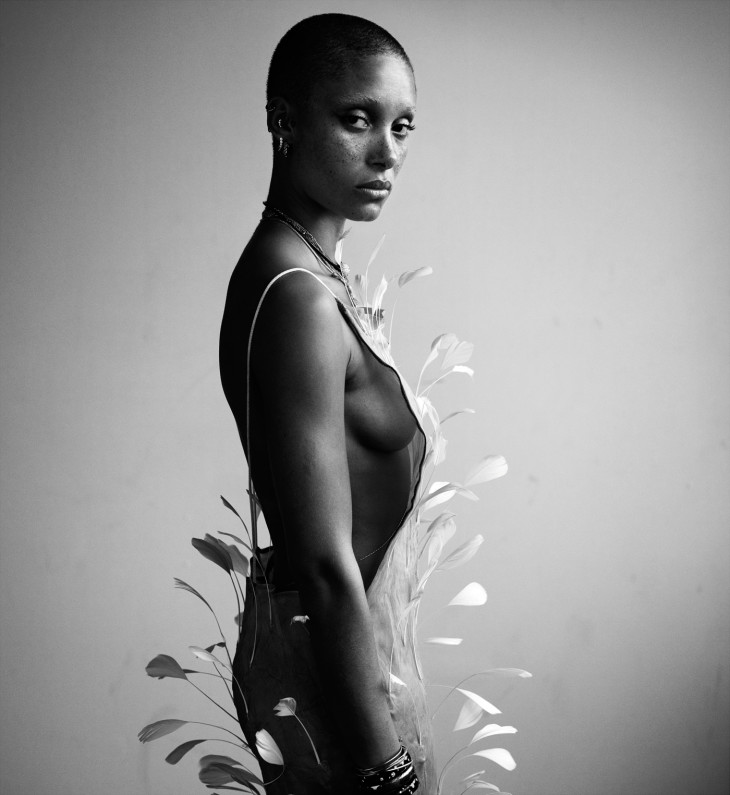 In an industry defined by image, the allure of the surface, and the creation of fantasy, the model and activist Adwoa Aboah speaks with uninhibited rawness about her vulnerabilities and difficulties. She has openly discussed overcoming addiction, her bipolar disorder, and her struggles with depression, and she’s working to help other girls do the same with Gurls Talk, her online platform encouraging teenagers to share their experiences and form a supportive community.

Aboah, twenty-five, grew up comfortably surrounded by creatives—her mother founded powerhouse creative agency CLM and her father is the head of a location scouting company—but began to feel unsettled when she started boarding school at thirteen.“That was five shitty years of my life where I was really an insecure teenager in a place that I highly didn’t enjoy,” she recalls. She struggled to find her way after graduating and eventually ended up in rehab before moving to Los Angeles to focus on nonprofit work and writing. “I knew that I had to get away from London in order to keep my sobriety,” she explains. “I knew that in order to get [better], I needed to stop thinking about myself so much, so that’s why I started working for different organizations.”

Now based in New York, Aboah describes Gurls Talk as the culmination of many years of learning and careful consideration. “Through therapy and a lot of the different treatment centers, I was taught this idea of authenticity and being honest and speaking openly,” she explains. “It baffled me that it was that simple: In order to feel less alone, one should speak openly about one’s feelings. My first step was sharing my story, then I could create a community where people could also share theirs.”

The growth of Aboah’s platform—which now includes panels, talks, events, and a collaboration with Google—coincided with the rise of her modeling work, which was “quiet” until she appeared on the cover of Italian Vogue in December 2015 shot by Tim Walker. Since then, “my career has gone mad,” she laughs, and she doesn’t see this shared timing as a coincidence.

“I think a lot of the amazing jobs that have been coming my way—Christopher Bailey asking me to come in [for instance]—it wasn’t just my modeling work,” says Aboah, who stars in Burberry’s Spring 2018 campaign, which she also helped creative direct, cast, and style. Unlike the replaceable pretty faces of yore, she is part of a new wave of models who are putting their visibility to good use. “There was an attraction that he had towards me and it was that I had a story, that I was myself, and, although I model, I have something to say. I am one of many voices that is an advocate for females and women all over the world.”