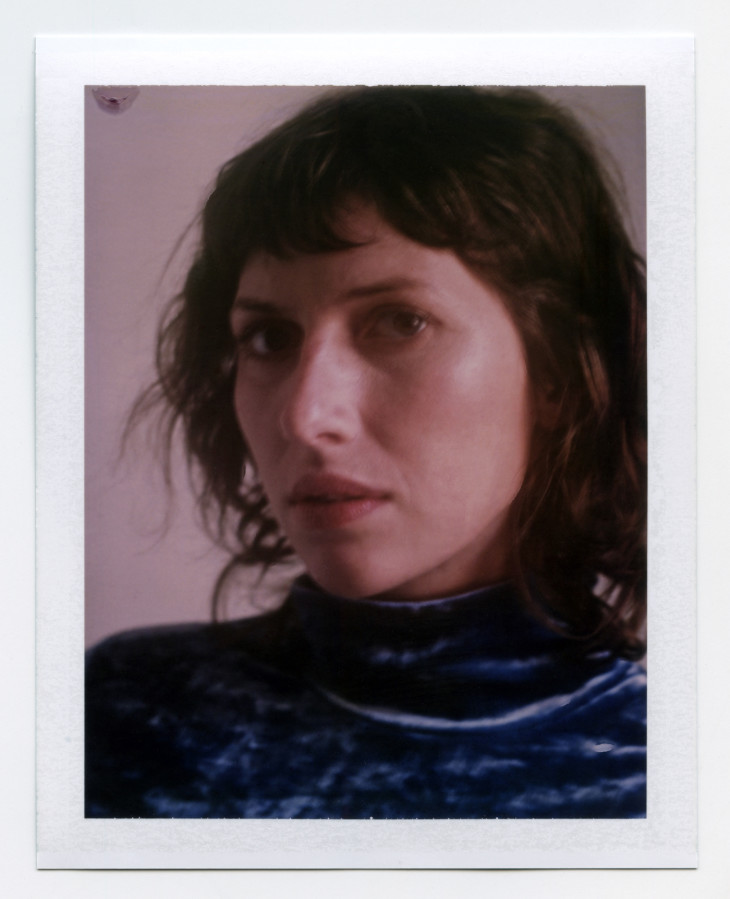 Styling by Akari Endo-Gaut at Frank Reps. Hair by Tetsuya Yamakata at Artlist. Makeup by Asami Matsuda at Artlist.

When performing “Horizon,” the first single from her latest album, Party, Aldous Harding first stalks the stage glowering across the audience, as if they stand accused, the object of her deep sorrow and rage. Suffused in blue light and accompanied by just a few chords on the piano, she begins to sing with brutal simplicity, the lyrics at times oblique, but implying a lover’s ultimatum to take her as she is or leave. “Here is your princess/And here is the horizon,” she repeats, her jaw jutted out defiantly, her arms spread wide. It is staggering. Throughout her show at New York’s Bowery Ballroom, the audience remains transfixed, silent between songs.

Harding, twenty-seven, is a singer-songwriter of startling talent and originality, and has become known as much for these captivating performances as for her vocal dexterity. She emerged from the fertile ground of New Zealand’s folk scene with her eponymous début album in 2014, but it was Party, released this May, that turned international heads, with acclaim from reviewers and fellow musicians alike. In a tweet, Lorde called Harding “the most interesting musician around” and said that her track “Imagining my Man” delivered a “soft flurry of gut punches.”

Signed to British indie label 4AD—home to Grimes, Daughter, the National, and U.S. Girls, amongst others—the record was produced by John Parish (PJ Harvey’s frequent collaborator) over an intensive two-week session in his hometown of Bristol. The result twists and turns through the spectrum of human experience, at times soothing, like rolling through soft, wet moss, and at others making you want to scream and shake the bars of your invisible cage with its quiet suffering. It grapples with questions of love, loss, ambition, and addiction, spanning genres far wider than its “gothic folk” label. Left: Turtleneck by Tibi. Skirt by Sacai.
Right: Jacket and trousers by Tibi. Top by Eckhaus Latta. Shoes, Harding’s own.

Before her Bowery Ballroom show, Harding is tired, dismissing her fatigue as the logical result of having worked hard this year without a break—she has been touring globally almost nonstop throughout 2017—as well as some pre-show jitters due to a sore throat. (“I don’t usually go in for nerves,” she says.) She talks eloquently, but pauses often, giving the impression of someone considering each question; she appears careful not to say something which might later misrepresent her. This doesn’t come off as fastidiousness about her image, but more as that same urge for truth that pulses through her music.

She possesses a rare power to transfix, not just with her voice but with the expression of a raw emotion from deep within. “I’ve always known there’s been something in me,” she offers. “Just strong feelings. I was quite a freaked-out child, a melancholic child. There was always a deep sadness I was carrying around, and I knew that must mean something, but I didn’t think I was going to grow up to be a professional musician.” What did she think she would be instead? “Somebody’s wife,” she answers, deadpan. “I didn’t really believe I was good at anything, and it’s not true.” She takes one of her longer pauses. “That is what I mean, that sadness often stopped me doing things, trying things, or finishing things. When Aldous Harding came out and people were like, ‘These are good songs,’ I was like, ‘Ok, cool, I really don’t mind doing it, so I’ll do that,’ and I’ve grown to love what I do.”

Born in Auckland to two musicians, Harding made her début singing on her mother Lorina Harding’s album Clean Break at thirteen years old. But it wasn’t until her early twenties that she picked up a guitar and learned to play, and not long after, she was discovered busking in her hometown of Lyttelton by artist Anika Moa. Harding says songwriting has always come easily to her. “On Party, all the songs happened really quickly, some in ten minutes, some in three hours, but no more than that. For me, there’s a sickness if it’s left too long. It’s tainted by time.”

While her first album was a stunning and bleak exploration of desperation, a dark fairy tale much closer to traditional folk, influenced by singers like Vashti Bunyan and Nick Drake, Party feels like an artist spreading her creative wings, more expansive in both scope and skill, recalling the drama of performers like Kate Bush or Scott Walker. From the almost childlike vocals of the title track “Party” to the tender, brooding voice of “Imagining my Man” interrupted by impassioned shouts, these voices feel like characters she embodies from song to song, shapeshifting to suit each one’s sound. Onstage, that transformation is visible in her demeanor. “It’s not that I need to slip into the character,” she explains. “I don’t make a decision about it; the decision is made for me. Not that I’m a vessel or anything weird like that, but that’s just how the songs are.”

In her performances, she adjusts her voice as one does an instrument, like a wind player shifting his embouchure to find the right sound, her face contorting with the effort. The visual impact—baring her teeth or with her mouth downturned, chin trembling—is incidental. “I have Instagram, people tag me,” she says. “I see these pictures of myself looking this way and no wonder people keep asking, but it’s just what happens. It produces the sounds I want to make.”

Harding is already working on her third album (“I have a plan and a vision but I don’t want to share it yet,” she says), but she has no expectations apart from improving and evolving as an artist. “I’ve always been absolutely sure in my uncertainty,” she says. “I don’t know if people are going to understand [my songs], but that’s not really my business, because I’ll drive myself mental with music, as well as with everything else, if I start doing that. Music is the only thing where I don’t think about it, because I don’t believe anyone can do wrong by themselves. I just do whatever I want and it’s worked so far.” Styling by Akari Endo-Gaut at Frank Reps. Hair by Tetsuya Yamakata at Artlist. Makeup by Asami Matsuda at Artlist.