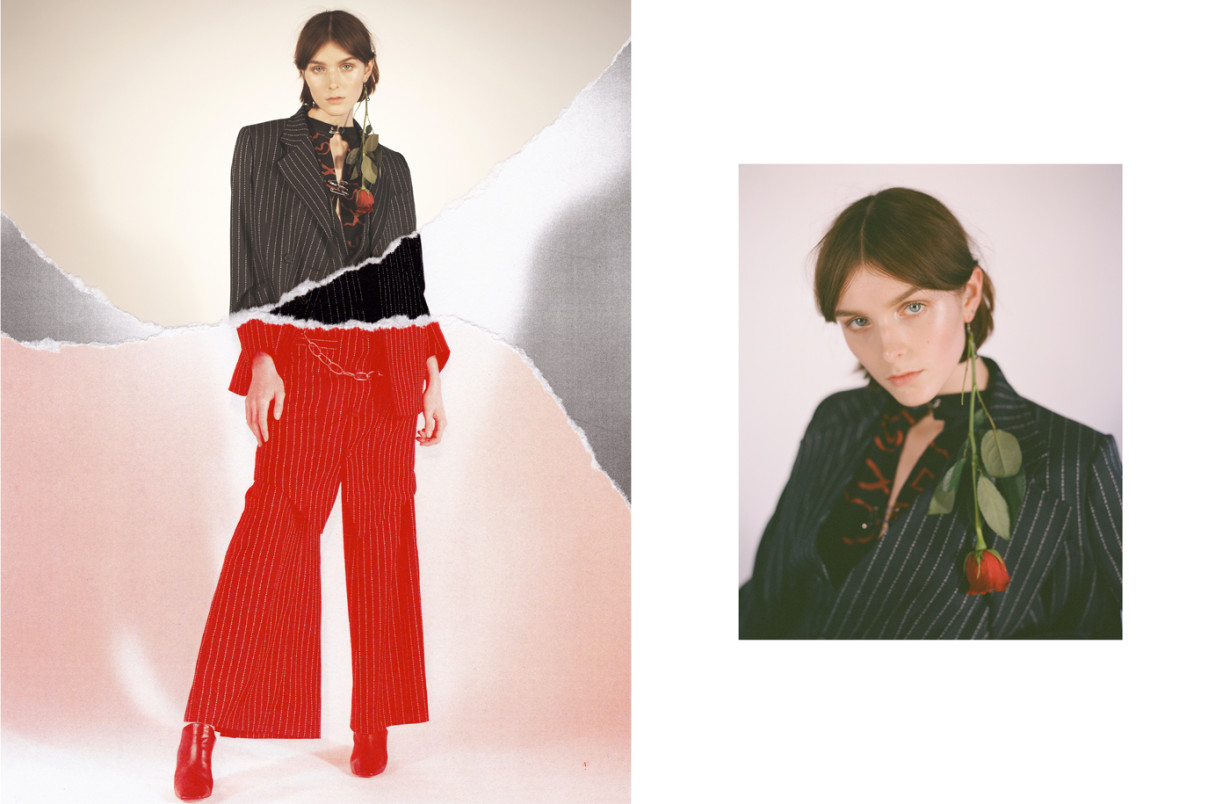 This story, all clothing and shoes by ALYX. All accessories, stylist’s own.

Style exists in the unexpected for ALYX designer Matthew Williams. Nominated for this year’s prestigious LVMH Prize, his approach to design is rigorously thought out, but never forced. Instead, the inspiration for brand accents like industrial hardware are mined from everyday life—the idiosyncrasies of skate culture, or the theme parks of California, for example. Now named among a group of some of the most diverse LVMH Prize finalists to date, Williams describes the honor as “amazing.” Still, you get the feeling that prestige is less important to him than a sense of pride in his craft—than knowing he has created garments his customers will enjoy adding to their collection. “I’d like [ALYX] pieces to become modern classics,” he explains. “For the clothing to be loved by the people who own it. The pieces from season to season are not only relevant to the brand story, but also to how they are transformed in each person’s wardrobe over time.”

That sense of a garment’s mutability has become a defining characteristic of this New York-based brand, reviving an idea we largely seem to have lost: that the individual defines the clothes and not the other way around. Williams understands the value in this, which might be a product of his background beyond fashion. With a career that began with making costumes for the musicians he worked with in his previous role as creative director for the likes of Kanye West and Lady Gaga, the designer says he always had one foot in fashion. Importantly, though, this means he had one foot out of it too, and it’s in this particular cross-section that ALYX feels so unique. Having launched his own label last year, Williams is now involved in every facet, from business to creative, which is where his background working with pop superstars has also come into play. “Working with musicians just allowed me to hone in on other skills like photography, video direction, and set design, as well as allowed me to collaborate with larger companies,” he explains. Williams’s vision for ALYX represents the confluence of fashion and street culture. “I learned about the terrain of cities through skateboard films before I had the means to travel, and I always dreamed of living in a city,” he explains, which also hints at the role California has played in shaping the brand’s DNA. “Since [ALYX’s] identity is so personal, my Californian adolescence is apparent in all my decision-making,” he says. But those West Coast accents are always offset by a dose of his new hometown. “Before living in New York, I lived in downtown Los Angeles and would look out my window in the Continental Building on 4th and Spring and imagine that I was living in Manhattan,” he recalls. “Manhattan always called my name and I moved there as soon as I could. Now I call it my home and I have a deep love for the city and the people in it. It inspires my work.”

Perhaps what is most striking about the ALYX æsthetic is how it’s simultaneously luxurious and also everyday. Quality is very important for the designer, but not just for quality’s sake. In fact, Williams laments the passing of his early years in production development, because it was a time when the look and feel of clothing was central to a brand’s success, in comparison to today’s market, where “brands can be successful without the clothes being made well.” He sees this change as both a shame and, in some ways, an opportunity. “I personally enjoy wearing clothes that are made well and to the highest standards. That’s why I journey to Italy to develop ALYX,” he says, before explaining that he believes customers are increasingly returning to this mentality as well as a sort of rebellion to mass production in fashion. “Nowadays, everything is available for people to buy anything that they want, so in that way they can spend their money on the one thing they want, or ten things that are readily accessible to them. Maybe they will buy one thing every season that they love and that lasts, rather than ten things that they are sick of after the season is over.” Nevertheless, luxury is still really more of an afterthought for Williams—in fact, he considers it to be a “loaded word.” It’s the actual quality that is first and foremost for Williams, and if that means his garments must exist within a luxury space, then so be it. “We are just trying to make clothing that is loved, that lasts, and will be passed down for future generations to enjoy,” he elaborates. “The sourcing is constant and sometimes we’ll work on a fabric development or silhouette for months and months before it makes its way into the collection.” This focus is another unique aspect of the brand—and one that feels perfectly contemporary in the context of fashion’s current confusion over the fashion week calendar. “[ALYX’s] ideas are shown when they become ready, not based on a seasonal schedule,” Williams explain, partly because “fabrication and development has become an obsession for me.”

Another obsession is the hardware employed throughout his designs. “A piece of hardware on an ALYX [garment] may take over a year to develop before it’s ready,” Williams reveals. “We spend lots and lots of time on it.” For example, the brand will be presenting a zipper next season that took them more than twelve months to create—a design detail Williams is understandably excited to share with his customers. Again, the inspiration for these finishing touches is found in unlikely places. “The hardware we have used to date, like the rollercoaster belt buckle and lighter caps, both came from objects I saw in my daily life. I like to use industrial items from the real world that then take on a new life in clothing. The hardware can have double and triple entendres. Beyond function, it can also symbolize experience.” In speaking with Williams, it becomes apparent that he isn’t one to monopolize the credit. The designer is proud of what he has created with ALYX, but also quick to attribute the importance of collaboration. “The sharing of ideas is one way the world progresses,” he explains. “I enjoy collaborating with brilliant people. It’s one of the things I love most about fashion, that it can be a connection point between people from different places, from different generations, with different likes and dislikes—that they can find a common ground in fashion.”

Williams believes it is through collaboration that the end product becomes strongest. “It represents all qualities I would love to resonate with ALYX, because it takes more than one person to make a brand successful, so collaborating with the team I build for the brand is vital.” This week brings the final LVMH Prize announcement, but whatever the outcome, ALYX looks sure to become a mainstay of modern wardrobes before long. There’s just a personality about these clothes that’s too difficult to ignore.