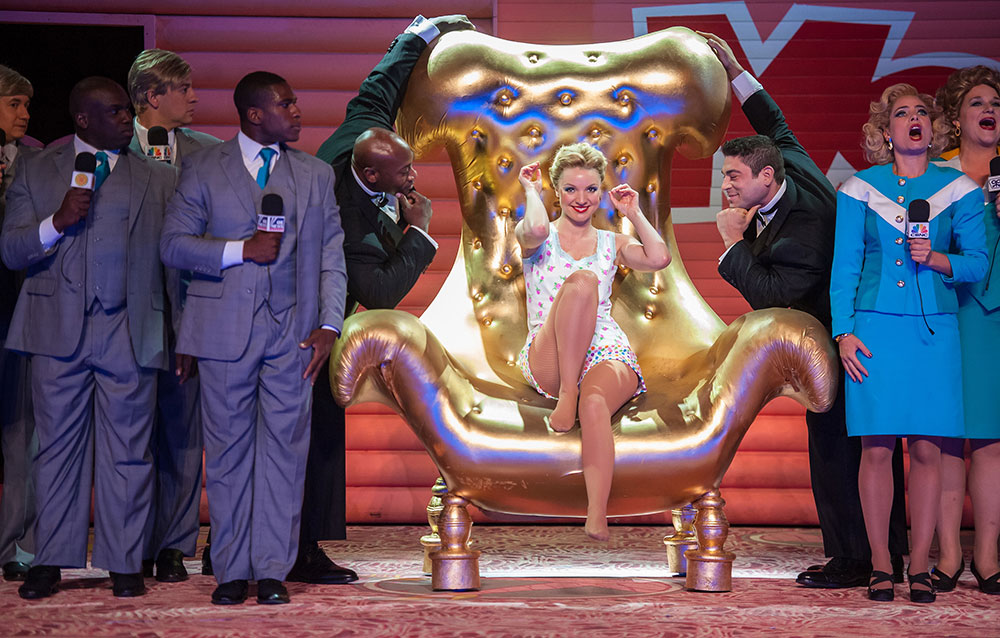 There’s nothing particularly scandalous about Anna Nicole. Though a word-frequency index of articles covering the new opera, which opened both New York City Opera’s fall season and the Brooklyn Academy of Music’s annual Next Wave Festival this week, would likely list “provocative,” “audacious,” and “breasts” right up there with “and,” “but,” and “the”—as far as operas go, it’s pretty tame. Granted, there is a section in which a plastic surgeon details the merits of various cup sizes, and the diva’s delivers her main Act One aria whilst clinging to a stripper pole. There are firearms and a well-hidden blowjob. There is swearing (“Fuck!”) and a dead child to boot.

But opera’s sexy-dancing cherry was popped way back in 1905 with the Dance of the Seven Veils in Salome. And unlike that infamous opera by Strauss, Anna Nicole does not at any point feature the prima donna getting freaky with a severed head. The drug-induced passing of her young son Danny is admittedly shocking, but pales in comparison to the deliberate river-drowning of an infant in Janáček’s Jenufa. And if you’re looking for a lower-class heroine who uses sex to try to get what she wants, look no further than Carmen, La Traviata, or any of about half of the operas written in the nineteenth century. Indeed, a brief survey of the works presented regularly at the world’s major houses reads like a comprehensive guide to debauchery, violence, cruelty, passion, and greed. Nor is it so strange that the opera takes as its subject something recently in the news—John Adams has been doing it for years, with operas like Nixon in China and The Death of Klinghoffer.

So if you’re surprised to hear there’s an opera about a sexy, scandalous, and lowbrow diva: Welcome to opera—the water’s fine. Composer Mark-Anthony Turnage and librettist Richard Thomas have of course been aware for some time that the story of Anna Nicole Smith—an alluring blonde from Texas who, in a career that included serving fried chicken, stripping, modeling, acting, and golddigging, managed to work her way into the national spotlight and tear herself apart in the process—is improbably good fodder for operatic treatment. Like its heroine, it practically begs for the limelight.

But at a time when much of the talk surrounding opera centers on the need to revitalize an art form enjoyed for the most part by old folks and Europeans (right?), what does Anna Nicole offer that is fresh and essential? One thing that the new opera, which had its New York première on Tuesday after a run at the Royal Opera House in London in 2011, brings to the table is a unique focus on the act of observation, which pervades the piece. Acutely aware of the role of media in our modern culture, the creators take pains to highlight the fact that that everything in Smith’s life was carefully built for mass consumption, with recitative delivered into constantly-proffered microphones, a scene that shows a broadcast of Larry King Live, and black-clad dancers with video cameras for heads, who hover around the desperate starlet like crows around a dying animal, ready to snap up juicy bits of carrion as the creature turns to carcass.

Turnage’s score is a neat piece of work, possessing an American feel without ever falling into mockery or pastiche. But while the libretto clips along with a punchy bravado that includes some surprising laughs, it must be said that it fails to reach any significant heights (or depths, for that matter) in exploring the life of a woman who had both in spades. That the lyrics occasionally run a bit flat or feel like they belong to a song cut at the last second from Fame is relieved by the simply astounding sets of Miriam Buether and costumes by Nicky Gillibrand. Buether’s eerie, well-polished version of the American nightmare includes enormous cartoon animals made out of the same resinous whatnot as a Ronald McDonald statue, huge mattresses that dwarf the sleeper, and sickly, glow-ravaged living rooms that present themselves in an unsettling pageant of tawdriness and splendor that leaves the viewer horrified and yet unable to resist the temptation to look. A fitting feel for an opera on this most modern and American of subjects.