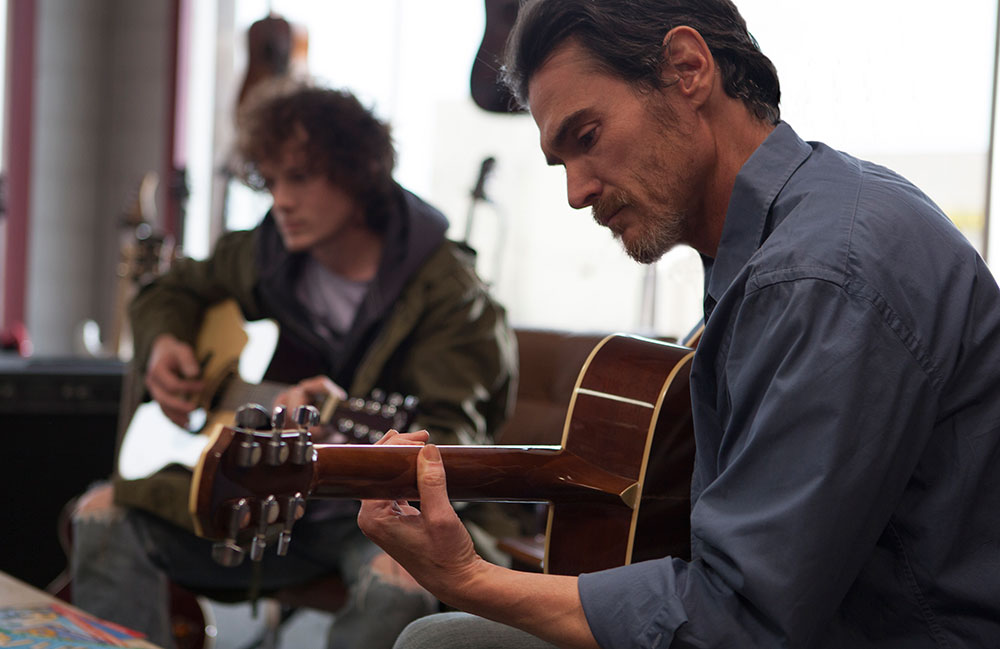 Hellin Kay, stylist and editor of Champagne and Heels, picks her favorite films from this year’s Sundance Film Festival.

Rudderless
This was my favorite film this season. William H. Macy directed an intensely powerful and well-written story about a father who loses his son in an on-campus shooting with a surprising twist. The music is also phenomenal, with original songs by Simon Steadman and Charlton Pettus. Starring Billy Crudup, Anton Yelchin, and Selena Gomez.

Boyhood
Richard Linklater’s epic twelve-years-in-the-making film follows a family as they grow up, grow apart, come together, live life, and literally grow older on screen. It’s an incredibly woven story, so simple and complex, with layers of Linklater’s classics like Slacker, Dazed and Confused, and the Before trilogy. Also closes with my favorite song by Family of the Year, “Hero,” which breaks and warms the heart. Stars Patricia Arquette, Ethan Hawke, Ellar Coltrane, and Tamara Jolaine, Linklater’s daughter. A Most Wanted Man
A fantastic, beautifully told and paced film starring Philip Seymour Hoffman as a Berlin-based investigator working with the German government to thwart terrorist attacks in the post-9/11 era. Also stars Rachel McAdams, Robin Wright, and Daniel Brühl. Directed by one of my favorites, Anton Corbijn.

The Skeleton Twins
Starring Kristen Wiig and Bill Hader as twins brought back together by family drama who have a tendency for over-sharing and using their honesty as both a tool for destruction and rebuilding. A comedic drama with an appearance by Luke Wilson. Directed by Craig Johnson.

Wish I Was Here
Zach Braff directed his second feature with his signature melancholic undertones to accompany his now-signature soundtrack. Braff plays a struggling actor, father, and son dealing with the impending death of his own father, played by Mandy Patinkin. Josh Gad costars as his brother and Kate Hudson plays his very hot, cool wife. An awesome tearjerker with a killer soundtrack right up my alley. Whiplash
Damien Chazelle’s second feature, based on his award-winning short from last Sundance, tells the story of an abusive New York music teacher and his driven student. JK Simmons and Miles Teller star as the teacher and pupil in this intense portrayal of musical ambition painted in its darkest colors.

Appropriate Behavior
Classic indie fare, well-written, directed by and starring Desiree Akhavan as a young Persian woman who has just broken up with her girlfriend and struggles with coming out to her immigrant parents. Mom is played by artist Anh Duong, which is a fun touch. Loved this one.

Obvious Child
Can I just say how thrilled I am that Gaby Hoffmann is back? She plays a supporting role to the amazing and wonderful Jenny Slate, who stars in this hilarious indie film, directed by Gillian Robespierre, about a comedian in Brooklyn going through a break-up and the usual splatter of life’s tendencies. A perfect indie hit.

God’s Pocket
John Slattery makes his directorial début with this old-school drama starring Philip Seymour Hoffman and Christina Hendricks. A well-done film worth seeing if just for the cast alone about a small Irish neighborhood and the clustered lives of its townspeople.

Listen Up Philip
Directed by Alex Ross Perry, Jason Schwartzman plays the kind of stereotypically self-involved New York novelist who can be found at a myriad of liberal-arts colleges all over the US. The script is original and fun to watch, with Elisabeth Moss as the begrudging girlfriend. Recommended for the overzealous intellects amongst us who want to think more than they want to feel. Lots of good quirky stuff here.

Happy Christmas
Anna Kendrick stars in this tale, directed by Joe Swanberg, of a young alcoholic who comes home for a family Christmas. Lena Dunham and Melanie Lynskey costar.

Hellion
Loved this feature directed by Cat Kandler, based on her short film of the same name from Sundance 2012, starring a bearded Aaron Paul as a father who recently lost his wife and is left taking care of their two sons, who wreak havoc as a result of the recent upheaval in their lives. Juliette Lewis plays the aunt and the two sons, played by Josh Wiggins and Deke Garner, steal the show. Incredible performances from both young actors. Josh Wiggins is one to watch for sure.

Laggies
Lynn Shelton comes back to Sundance for the third year in a row with another great story about the wandering generation that seems to live on in all of us while we avoid the perils of reality and “adult” life. Starring Keira Knightley and Chloë Grace Moretz as the age-disproportionate friendship duo with Sam Rockwell as the dad.

Fishing Without Nets
A feature version of the short that won Sundance two years ago about a Somalian pirate hijacker, told from his viewpoint rather than Tom Hanks’. Director Cutter Hodierne won the directing award for this Vice Media-produced feature.

Kumiko, the Treasure Hunter
Definitely one for the Bardian in me. Quietly-paced film by director David Zellner, who has a quirky essence to his filmmaking, (which I love), starring Rinko Kikuchi. It’s not an exciting film by far, but if you appreicate the lonely nuance of searching for answers in the mundane, the layers are here to unfold.

Happiness
A beautifully shot documentary about a Tibetan village dealing with the oncoming and unstoppable wave of modernism in the form of television. Though it’s a documentary, it feels like a narrative tale directed by Thomas Balmès.