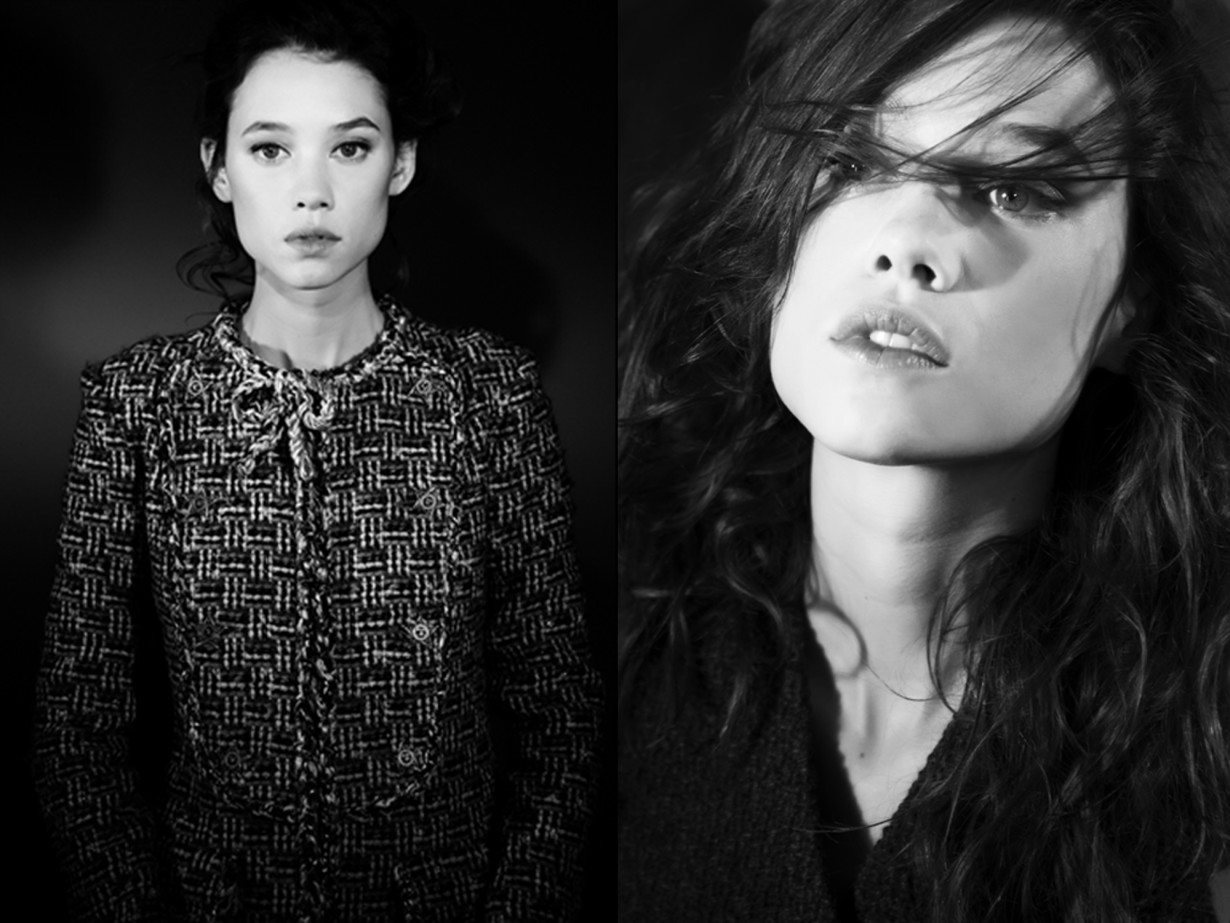 In Marisha Pessl’s début novel, Special Topics in Calamity Physics, the narrator, the overeducated and metaphor-happy Blue van Meer, describes a fellow classmate’s eyes as “the color of a kiddy pool (blue, green, suspicious hints of yellow),” a strikingly precise approximation that applies equally well to Astrid Bergès-Frisbey, star of the new film I Origins. The Spanish actress’ unique pigmentation comes thanks to sectoral heterochromia, a rare genetic mutation that writer and director Mike Cahill, in a stunning coincidence, had already assigned to her character Sofi before ever meeting her.

The biopic is, in many ways, a tricky proposition, a form where the carefully-researched realism of history and the emotional impact of drama can blend in a uniquely powerful way. The flip side is the difficulty of doing justice to the memory of a man who lived, especially one who is revered throughout the fashion world. “When you’re playing an icon such as Yves Saint Laurent,” says Pierre Niney, the 25-year-old French actor who does just that in the new film Yves Saint Laurent, “people have their own different expectations, so it’s hard to find the right balance. It’s hard to play someone who existed because of those expectations, but at the same time, he existed, so you have the model.” 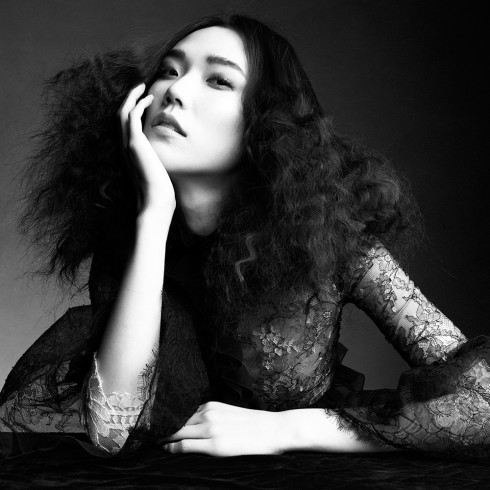 Tao Okamoto is a woman of many talents—model, actress, philanthropist, and, now, muse. In celebration of her fifteenth year in a famously fickle business, a show of fifteen exclusive photographs by some of the industry’s most interesting new talents will go on display in New York tonight in a show set to open to the public tomorrow for one day only. Okamoto, who has long been one of modeling’s most recognizable faces, says she relished the opportunity to play a variety of roles for her collaborators’ cameras, which captured her over the past year since her film début opposite Hugh Jackman in The Wolverine. “I told my agents how much I enjoyed the acting experience and how I wanted to bring something I learned from that craft to where I used to belong,” she explains of the show’s genesis, “which is, of course, modeling.”

It seems like Swedish actor Joel Kinnaman has been in everything we’ve liked this year. From David Fincher’s The Girl With the Dragon Tattoo to AMC’s The Killing, Kinnaman now stars in the big-budget reboot of RoboCop. We caught up with the breakthrough actor as he was becoming a household name.

Rising Belgian actor Matthias Schoenaerts is on a tear. From a starring role opposite Marion Cotillard in Rust and Bone to the upcoming Suite Française with Michelle Williams and Far From the Madding Crowd with Carey Mulligan and Tom Sturridge, his profile is set to explode this year. Now, as the new face of Louis Vuitton, The Last looks back at our first interview with the future star.

Fares Fares has come a long way since he and his younger brother Josef started their careers, as actor and director respectively, making Swedish comedies in the early 2000s. Their beloved 2003 film Kopps drew its humor from the painstaking lack of action for the Swedish police and offers a compelling juxtaposition to the dramatic heights of Fares’ most recent appearance, hunting down Osama bin Laden with SEAL Team Six in the Academy Award-winning blockbuster Zero Dark Thirty.

FROM THE ARCHIVE: CAREY MULLIGAN, SPRING 2009

We’ve been around awhile now, and we know a lot of our readers might not have had the opportunity to experience our earlier issues. So we wanted to give you the chance to discover one of our favorite stories from our archive. Some of them feature actors, musicians, or artists who eventually made it big, talents we are proud to have tapped early in their careers. Some have brilliant writing, and some have beautiful photography. Some have both. But all of them are so great we thought they deserved a second chance. This week we present Jauretsi Saizarbitoria’s Spring 2009 profile of Academy Award nominee Carey Mulligan, then just a budding Michelle Williams lookalike fresh off wrapping An Education.

In a way, they are characters straight out of a typical romantic comedy: Ali, the rough, wounded fighter with a heart of gold, and Stéphanie, the delicate flower whose inner strength allows her to overcome painful tragedy. The two meet cute in a nightclub. He has a son, she has a boyfriend. They circle each other warily for weeks, and it’s no surprise when they end up in bed together. But Rust and Bone is nothing like your typical romantic comedy—there are few laughs, and little in the way of traditional romance—and, thanks to a pair of brutally powerful performances from Matthias Schoenaerts and Marion Cotillard—Ali and Stéphanie are utterly unlike any pair seen on screen in recent memory.

An Oversimplification of Her Beauty is the title of filmmaker Terence Nance’s début feature, which premiered in the New Frontier selection at Sundance this January. It is a ninety-minute dissection of Nance’s own inability to find love. Through various forms of animation, an omniscient voiceover, and live-action re-enactments, Nance provides an intimate portrayal of the women he’s pursued and the quixotic attempts with which he’s pursued them. The Sundance Film Festival described it as “explosively creative,” and, indeed, one has to set aside normal expectations of a feature film when watching Oversimplification. Hollywood structure does not abide. Rather, Nance tells his story like a singer-songwriter. It has verses, a chorus, and an occasional solo. Fact is second to impression, the narrative is nonlinear, and characters express themselves directly to the camera. When speaking about the film, Nance mentions blues musicians like Lead Belly and Blind Lemon Jefferson as some of his key influences.

Dreama Walker’s eyes are deep blue, round as saucers, and framed by a perfectly thick row of long, curly black lashes. They were conniving as Hazel in the first two seasons of Gossip Girl (she played a former Queen Bee ousted from Blair’s clique), and they’re wide-eyed and innocent in her current turn as June in the ABC comedy Don’t Trust the B In Apartment 23, but it’s her anxious, shadowy glances in the new drama Compliance that are the toughest to shake. The film debuted at this year’s Sundance Film Festival and is based upon a real-life scam that took place across the country in 2004. A prank caller pretending to be the police successfully persuaded restaurant managers to conduct strip searches on their employees in over seventy different establishments, until he was finally apprehended several months later. The dark storyline seems an unusual choice for Walker, whose polite sensibility and delicate good looks we’re used to seeing in chirpy primetime sitcoms, but the events hit close to home for the Tampa native.