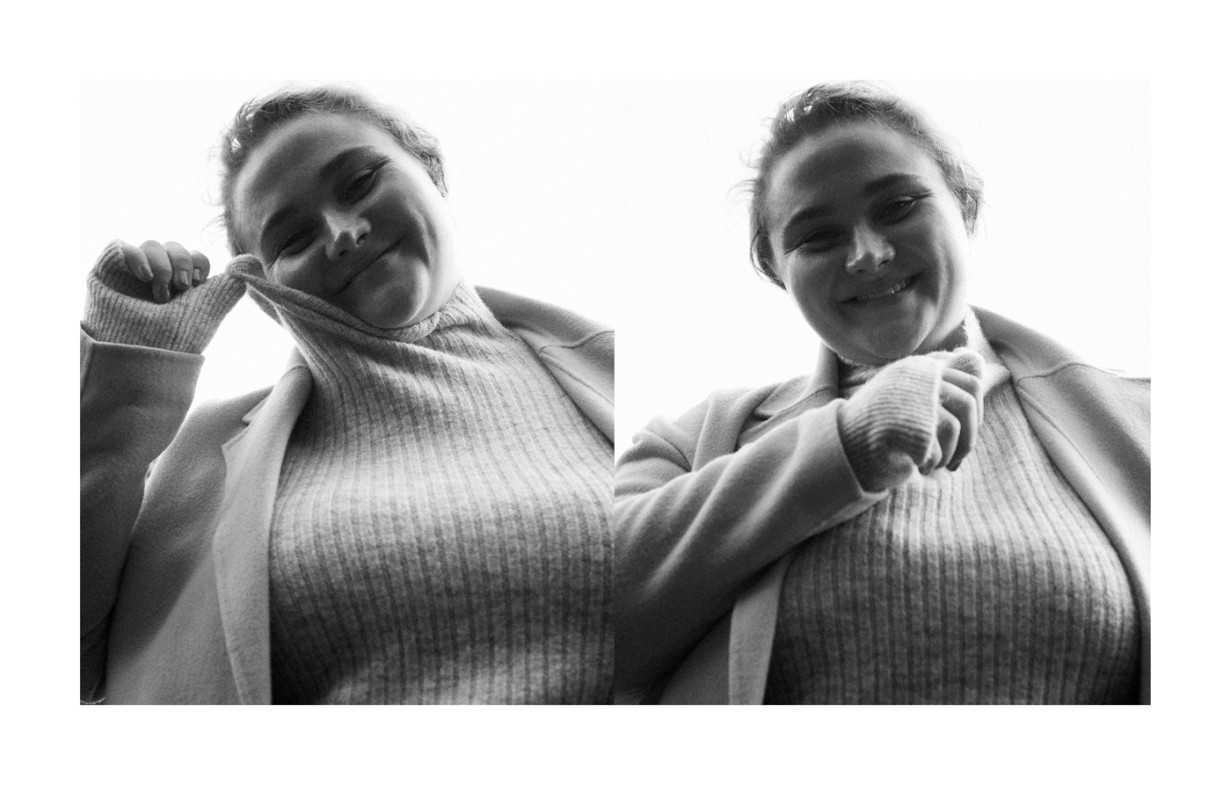 Coat by Tibi. Sweater by Topshop.

Seven years ago, when Danielle Macdonald lost a lead role in an ABC Family series due to visa issues, she took it better than most young actors would. “I got to start from scratch, and that’s what everyone else has to do,” she says modestly, knowing preemptive success may not have paid off. But her determination did, and with a breakthrough performance as an aspiring rapper in the new film Patti Cake$, Macdonald has garnered the attention of Hollywood once again.

Macdonald was drawn to acting when she began taking classes at the Australian Institute for Performing Arts in the eighth grade. “I was terrible at the music part and the dancing part was fun, but it was the improv that I really loved,” she explains. She continued to pursue acting and attended college for a year, but she wasn’t getting enough auditions in Australia’s relatively small industry. It was then that she moved to Los Angeles, and only after a short time there the offer for ABC’s Huge came and went. “I was definitely upset, but I was just like, if I can still get my visa I can go over there and at least I’ll be able start working in the industry,” she recalls.

After a few years, her patience began to pay off. Her first major role came in 2014 in the drama Every Secret Thing. Macdonald was cast in an ensemble alongside Elizabeth Banks, Diane Lane, and Dakota Fanning. A cast like that might be intimidating for a young actor, but she acclimated right away. “They’re just another human being, another actor, so the boundary breaks quickly,” she explains. It was only when she was cast in Patti Cake$ that she faced her first real challenge. Actors spend their entire careers seeking out transformative roles, but this was a big test for Macdonald. “It was terrifying. When I was reading it I was like, ‘I think this may be the hardest role I ever do,'” she explains. “And it was. It was hard, it was a process. I had to learn how to walk differently, talk differently, sound different, how to rap. So many things I had to learn, and it was so overwhelming. Sometimes it felt like I just wouldn’t get there.”

She eventually did get there, but not without months of preparation. To get a sense of flow, she would recite difficult verses, such as Kendrick Lamar’s verse on Big Sean’s “Control,” over and over until she got them down perfectly. By watching hours of YouTube videos of rappers, both famous and up-and-coming, she gauged different mannerisms—only to realize emulation wasn’t enough. “It was really interesting, because everyone has such a different way of doing it,” Macdonald explains. “And that was the thing, there is no one way, you have to find what naturally flows through you. That was the thing I had to get my head around, I had to find the way I would do it.”

But getting into the mind of New Jersey’s Patricia Dombrowski wasn’t just about learning how to rap. While the character’s main arc is making it as a rapper, she has to do it amid challenging relationships and financial woes, all of which Macdonald channeled in her performance. “You have to have this confidence that you can [rap], but I think even when Patti was just being herself it was still pretty different from me,” she explains. “So it was that thing where I had to convince myself to just do the character in general, and then as Patti I had to convince myself I could be this rap superstar. It was many layers of confidence and just believing in yourself. But when she was terrified and about to perform, trust me I was terrified that I had to perform. Those emotions definitely really helped.”

Emotions are what guide her performance, which made her a breakout star at Sundance earlier this year, and it’s why her portrayal of Patti Cake$ is so compelling. “You can learn all the physical attributes on the outside, that stuff you can practice. But knowing who someone is on the inside is all emotions and you can’t fake that.” It also helped that, at least in some aspects, she was able to see a parallel with her own career. “I think I understood her—understood her want for this dream she had, her goals, but kind of not being able to get there, or people telling her she won’t be able to. I’ve definitely experienced that, for sure.” Coat by Tibi. Sweater by Topshop. Jeans by RE/DONE.

Despite the challenges the characters face, the film still evinces comedy throughout. Much of the film challenges conventions—both the characters and the dynamic between them feel fresh. It’s in these varied relationships between Patti Cake$ and her mother, her best friend, her love interests, and her idols that the film moves from lighthearted humor to bubbling intensity. “I like that different people in her life bring out different parts of her, because I feel that’s very true to life,” Macdonald reasons. “I’m different around one friend than another. I love that her best friend sees the darkness and brings out the confidence. Her mom brings out all kinds of emotions, and you know Bob/Bastard [a fellow musician], she’s actually kind of confident with him, because he takes on the role where he’s not as confident. So it forces her to be more confident in that aspect of her life.”

A running theme in the film is also figuring out who you are, especially when the world sees you as someone else. “She’s doing an idea of what she thinks she should be and what she grew up listening to. But that’s someone else’s world, not hers, so I think that it was actually a really good lesson for her. She has to figure out who she is, her reality, and what she wants to put out in the world, and embrace that.” Macdonald is speaking as someone who has gone through that process herself. With major upcoming roles in the neo-Nazi drama Skin, Dumplin’ with Jennifer Aniston, opposite Saoirse Ronan and Timothée Chalamet in Greta Gerwig’s upcoming Lady Bird, and as the lead in White Girl Problems, there’s a lot she has to put out in the world. Now all the audience has to do is sit back and embrace it.

Patti Cake$ is out tomorrow. Coat by Tibi. Sweater by Topshop.