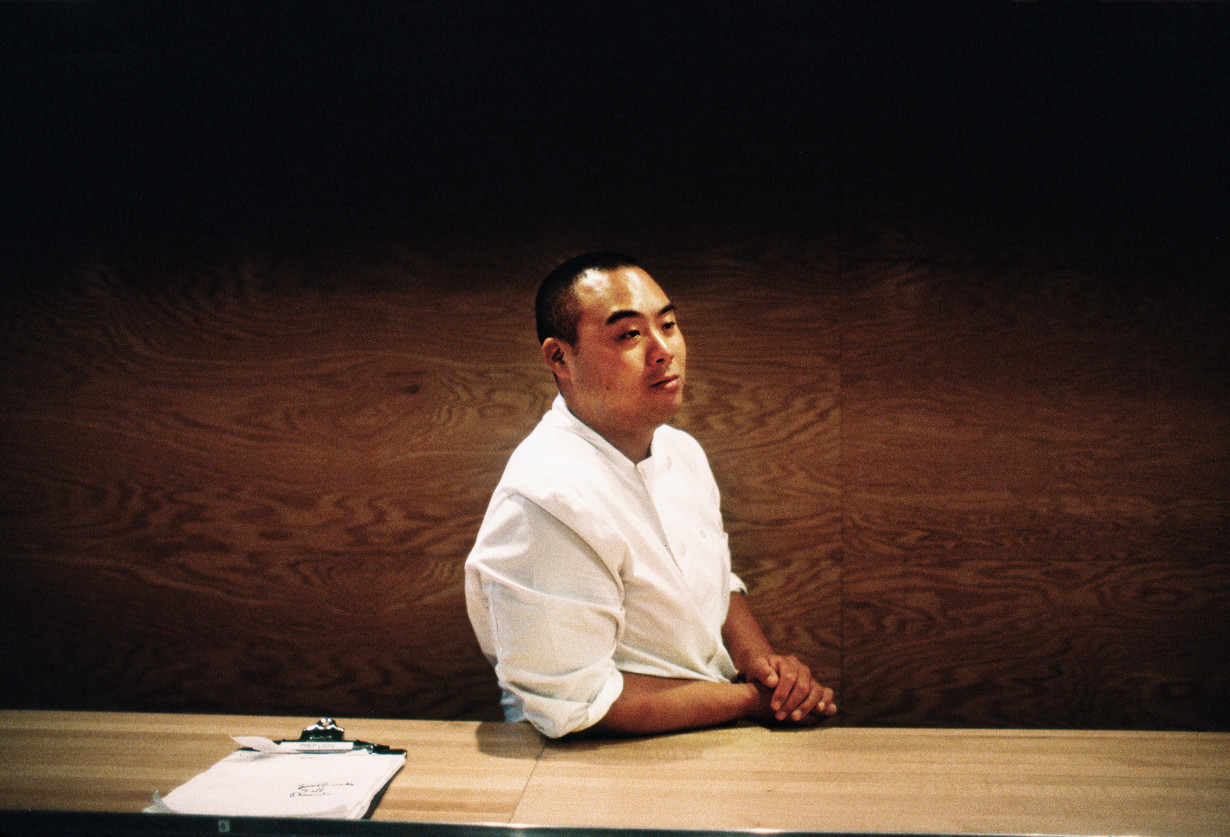 Originally published in the Spring 2009 issue.

His chain of Momofuku restaraunts has redefined the way we think about food, but the spectacular star chef David Chang is always on the lookout for new bites and new techniques.

Here he talks about kombu seaweed, food revolutionaries, and the case for the american cheese.

In just over four years, Momofuku has expanded from a noodle bar with twenty-seven seats to four fully-fledged and (thankfully) successful restaurants. We’ve had an unreal run of luck with critics and have put together an amazing group of people to run the restaurants. I am the “chef” in title, but every restaurant has someone else running it today: Kevin Pemoulie and Scott Garfinkel at Noodle Bar; Tien Ho and Fran Derby at Ssam Bar; Peter Serpico and Sam Gelman at Ko; Christina Tosi and her pastry elves at Milk Bar. After Ko opened, I was totally and completely spent—I didn’t feel like I had another dish or menu or restaurant idea in me. I was thirty-one and totally washed up.

So I’ve spent the past few months trying to recharge. Trying to rekindle an interest in cooking that could easily be subsumed into the day-to-day challenge of running a business, trying to reignite the fire under my own ass that I demand to be under everyone around me. For me, cooking is pointless if you’re just going to do the same thing over and over and over again. (Since this is a fashion magazine, I’d make the analogy that I wouldn’t want to wear the same clothes everyday for the rest of my life, except that it wouldn’t be true.) Travel is important. Most American chefs do not realize this; European chefs do. I just got back from a trip to Kyoto where I learned about how to kill live fish, skin an eel, and all kinds of other shit that it will probably take me a while to put into practice, but which makes seafood seem like something we need to go way deeper with at the restaurants.

While I was there, I learned how to extract the maximum amount of glutamate from kombu seaweed, which is the building block of dashi, our ramen broth, and Japanese cuisine in general. I’ve been cooking with this stuff for years and years, and never until I met this crazy old Japanese scientist guy who had done research on cooking seaweed did anyone ever explain how and why and for how long you’re supposed to cook kombu. It’s a tiny detail—cook kombu for broth at 40 degrees Celsius for 40 minutes instead of steeping it in “warm” water for an almost indeterminate period of time—but it’s details like that that good cooking is based on.

Books are important. Heston Blumenthal, of the Fat Duck in Bray, England, just put out a 13-pound book called The Big Fat Duck Cookbook. It’s probably going down in history as the greatest cookbook ever written. It covers the use of liquid nitrogen and hydrocolloids and every other crazy new and important technique in cooking in fantastic detail; it tells long stories about how certain dishes were developed to give a full picture of the creative process at one of the world’s most creative restaurants; and it’s a totem to Heston’s particular brand of genius. Since we got a couple copies around Christmas, I’ve read it and so have a bunch of my cooks. It’s driving us to think about food without blinders on. Books like that are great reminders that any time we’re feeling comfortable, someone else is out there in the countryside leaving us in their dust. And then there are restaurants: every chef goes shopping for new ideas in other restaurants. You never know what you’re going to find, or where—even bad food can work as inspiration for what not to do.

When I opened Noodle Bar in 2003, I was coming off a long stretch of eating at either New York Noodle Town or Oriental Garden. Our ginger scallion sauce is stolen almost entirely from Noodle Town. Order the lo mein with ginger and scallions and a side of ginger scallion sauce, and you’ll see the genius in that dish. It’s the best $4.95 you can spend in New York. I’ve eaten more meals at Oriental Garden than anywhere else on earth, and their Peking duck was the inspiration for our pork buns, which are the building block of the Momofuku empire. I circle back regularly to those places to remind myself why they’ve been around for decades: they’re doing shit right.

I have a weakness for diners, places that seem connected to another time and place. Whenever we organize expeditions to farms to visit the people who supply our restaurants, we’re on the lookout for them. I ate for the first time at Cup & Saucer, an amazing-looking old diner in Chinatown, when we were doing the shoot for this, and was reminded that there is a place for American cheese: a grilled cheddar just isn’t as good.

And I go by WD-50 as much as possible. Wylie Dufresne, the chef, has become a friend and a mentor over the years. The last time I stopped by was after he and his wife had come in for an anniversary dinner at Ssam Bar, when we created a bunch of new dishes for him on the spot. After being exceedingly gracious about having a good time (and noticing that we played an all-Grateful Dead playlist for him that night), he broke down what we served him, what was awesome, what needed refining, and asked if one particular course was cooked by a different cook. It was. He just understands and thinks about food differently. His menu is so forward-thinking that I feel like a gutter catching the runoff of his creativity when I eat there. There’s no doubt in my mind that he’s America’s greatest living chef.

And then it’s back to the kitchen with everything: memories of dashimaki tamago from Kyoto, a shipment of black truffles from Tennessee that I learned about when I was visiting our bacon and ham guy down there, new ideas about hydrocolloids from Wylie and Heston, and dashi ideas from that scientist in Japan. We start fucking around with new combinations and coming up with new dishes; the road to getting one right is littered with failure. But then it clicks, and then there’s this new dish we’ve got for Ko—eggs charged with NO2 and stabilized with Methylcellulose f50 that cook up like a cloud on a bath of bacon dashi, to be plated with truffles and sea salt—and that’s what makes cooking exciting again.

Then it’s back out to pillage for more ideas and inspiration, time again to try and keep this Momofuku thing going forward.