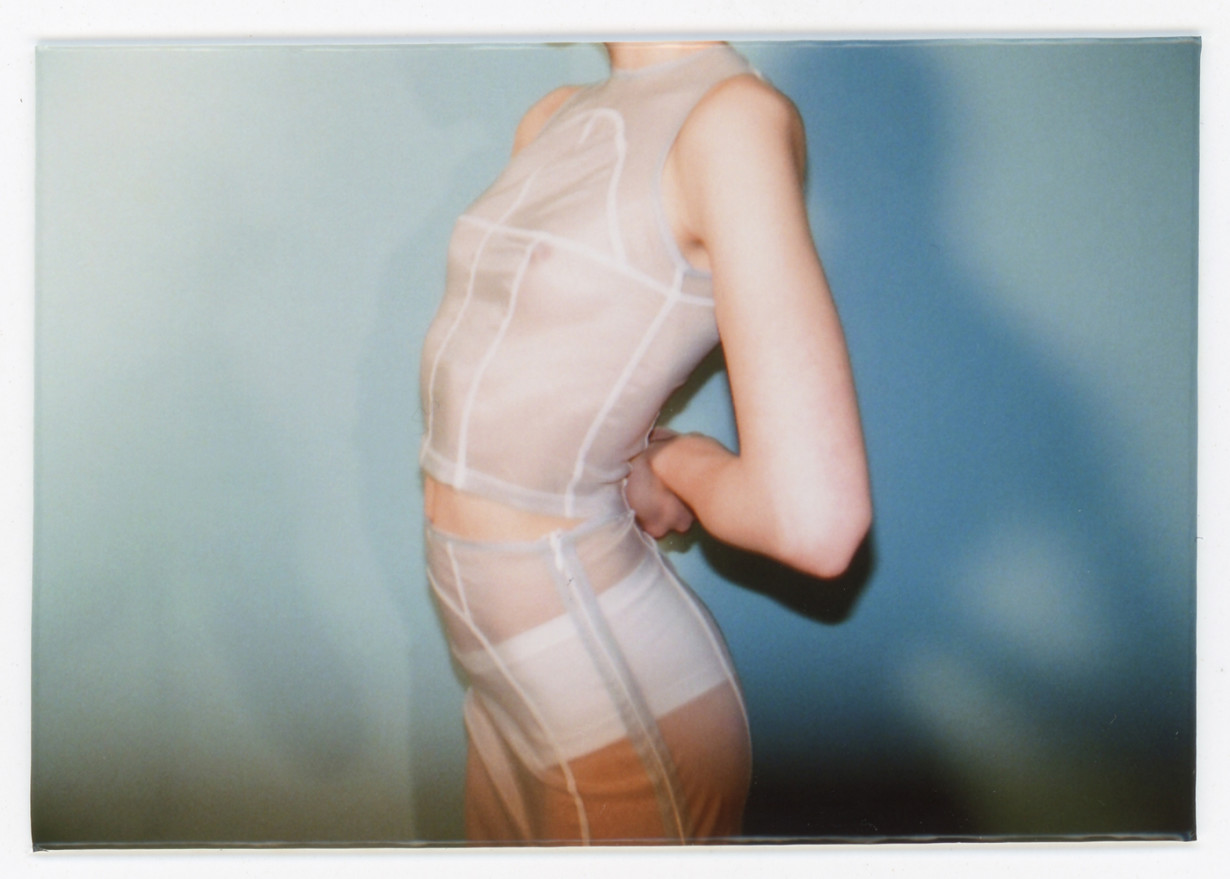 All clothing throughout by Eckhaus Latta.

I’m talking to Eckhaus Latta the same way they communicate every day—over the phone. The design duo is bicoastal, so while Mike Eckhaus is in their New York studio right now, Zoe Latta is sitting on her porch in the eighty-five-degree Los Angeles heat, wearing her nightgown.

It’s certainly an unconventional way to run a fashion label, but it works for them. Together, they founded a brand that knows the possibilities of beauty better than anyone. Since 2011, Eckhaus Latta has brought diversity to fashion, regularly using models of all races, shapes, sizes, and sexes, with a mother and daughter walking the runway hand-in-hand as well as an eight-months-pregnant model proudly displaying her protruding stomach. While this non-model movement may have swept the catwalks since, Eckhaus Latta did it first. Latta modestly dismisses this suggestion: “If this approach has expanded, I think that’s just lovely. It’s nothing but good news for us.” But she hastens to add, with a healthy dose of sass, “It’s not like someone stole our fire.” Whatever happened, it’s poignant that 2017 was the year we saw the most diversity on the catwalk. Ever.

But it’s 2018 now, and the pair have just turned thirty. Do they feel different? Not really—but they are ready to take Eckhaus Latta to new levels. “We’ve grown a lot, both as individuals and designers,” Eckhaus muses. “We started without any proper training in fashion. We had more of an art school mentality.” It was that artistic attitude that birthed their trademark handmade æsthetic, which, while firmly entrenched in their DNA, has been switched up over the years with something slightly more structured. “The role of the hand, and the quirkiness that comes with it, is always something that is going to be important to us æsthetically,” he explains, “but I think that we’ve always liked things that are perhaps more refined, more tailored—things with a greater sense of finesse. Now, the concept of commerciality is no longer frightening to us.” Commercial—it’s so often seen as a dirty word in the industry. But with stockists like Opening Ceremony, LN-CC, and Dover Street Market, as well as a spot on Forbes’s 2016 30 Under 30 list under their belt, Eckhaus Latta has had to come to terms with the fact that it is, well, popular. “It’s always this funny, stigmatizing word, ‘selling out’ or ‘being commercial,’” says Latta, “but there’s a lot of joy in being able to design a really great t-shirt at a price that people can afford, to make hundreds of them, and employ people to do so.” Of course, the pair have already proven that they can cater to both sensibilities with their Camper collaboration. After four seasons, they’ve realized that they’re all about balance. “We don’t want to be just this art school brand,” she stresses. “A lot of people want to be able to sum up a brand in one sentence, but we never really wanted to be just one thing.”

That feeling of freedom runs through their collections, which juxtapose nonchalant knits with cleaner silhouettes and, more recently, tailoring. It works well, the balance of formality with ease. In fact, it seems that suits really stole the show for Spring 2018. The all-black opening ensemble looked deliciously dandy in a lustrous satin and yet so sharp with its structured shoulders, while the seersucker set had powerful, generously proportioned pants balanced with a deftly nipped-in waist. Intermingled between these were the clingy, chaotic knitwear pieces the label is known and loved for, repurposed shirting, and dark denim slung just low enough to showcase a sliver of hip bone. Sporty stretch-mesh and industrialist overstitching were o set with just a whimsical hint of femininity—delicate pastel hues and wispy organza whipped around beautiful bare torsos. You can see why it would sell. But you can also see that commerciality will never be a word immediately associated with Eckhaus Latta. Individuality is in its nature. Take the campaigns, for instance, which showcase a unique knack for making the bizarre beautiful. The accompanying videos, filmed by long-term collaborator Alexa Karolinski, capture everything from a man’s penis swathed in smoked salmon to a dinner party where guests are interviewing themselves in the bathroom. While these projects technically aid sales, it’s also abundantly clear that there are no other motives here. The designers do it because they love it. “We count them as something entirely different and then realize later that they actually are marketing,” Eckhaus laughs.

These projects are more than marketing—they are a post-show reward. It could be called downtime, if that really existed in their world. “We work on a collection up until the last second when it goes on the runway. We don’t really get to see it until afterwards,” explains Latta, “so it’s a really nice way to re-contextualize the clothes.” They were certainly re-contextualized in the Spring 2017 ads, in such a way that, ironically, they didn’t take center stage. The images depicted different couples having sex, their fumbling hands and intertwined limbs being unpeeled from the brand’s jackets, jeans, and knitwear. It’s in that blatant deprioritization of clothing that one can truly see where Eckhaus Latta is coming from, the idea that clothes are meant to be lived in and moved in, that they are all about expression.

And the two will continue to express themselves, all the while strategizing Eckhaus Latta’s growth. “We would like to branch out into bags and shoes at some point,” admits Eckhaus. Latta is very sure of their long-term goals: “We don’t want to be a massively distributed brand, but right now, it feels like we could be an exciting medium-sized business—one that distributes quality product to multiple people, while staying true to its identity.” And short term? “Just make it better.” You can’t argue with that.