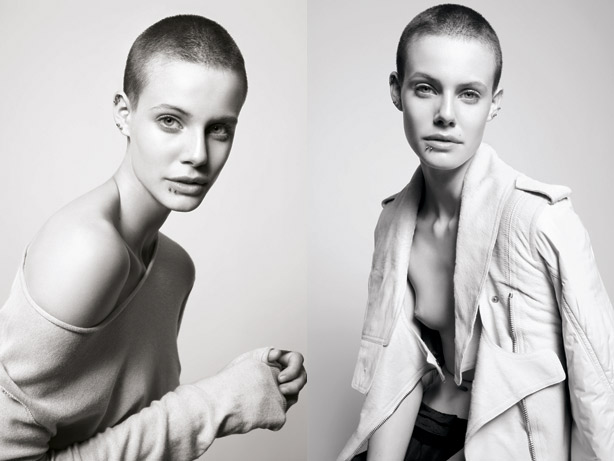 Ehren Dorsey might not fit the literal definition of “overnight success,” but the new model’s whirlwind rise is about as close as one can possibly get. Within just three weeks of being discovered earlier this year, the 19-year-old Missouri native quit her job as a maid, left her hometown, and moved to New York to model full-time. She hasn’t looked back since.

“I know it sounds so overwhelming and amazing, but it actually felt kind of simple,” Dorsey notes of these changes. After leaving high school a few years ago (she’s since completed her credits and is now working towards an associate degree studying anthropology), Dorsey cleaned houses in St. Charles, Missouri, a city thirty miles west of St. Louis. “Everyone thinks my story is so special, but for me it’s not weird because that was my life, working as a maid,” she explains.

She had tried modeling several years ago at the suggestion of strangers, but it wasn’t until she signed with Mother Model Management (also the mother agency of Karlie Kloss and Katie Fogarty) that she decided to give it another shot. “I was kind of over it because two years ago I had met with an agent who’d flown from New York to meet me, and it was just terrible,” she recalls. “This guy takes one look at me and is like, ‘Why is your hair short? Do you think you’re a boy?’ and I was like, ‘Well, what if I do?’ That’s when I decided that I didn’t deserve to be treated this way and cut my hair even shorter.”

Now Dorsey’s buzzed hair and piercings, along with her striking blue eyes, are ironically the features that set her apart from the rest of the pack. “It’s weird because after all these people telling me, ‘You don’t look good, you don’t look pretty,’ it was like, ‘Yeah, I fucking do, and deal with it.’”

While taking pictures (she brings her camera everywhere), going to museums (she planned to visit the Alexander McQueen exhibit at the Metropolitan Museum of Art the day after this interview), and soaking up every bit of the industry she can, Dorsey says she’s still taking in her new career with a grain of salt. “I have a specific look and I understand that,” she says. “I’m not the only girl who looks like this, but I’m one of the few, so it’s pretty obvious that people are either going to want me or not want me.”