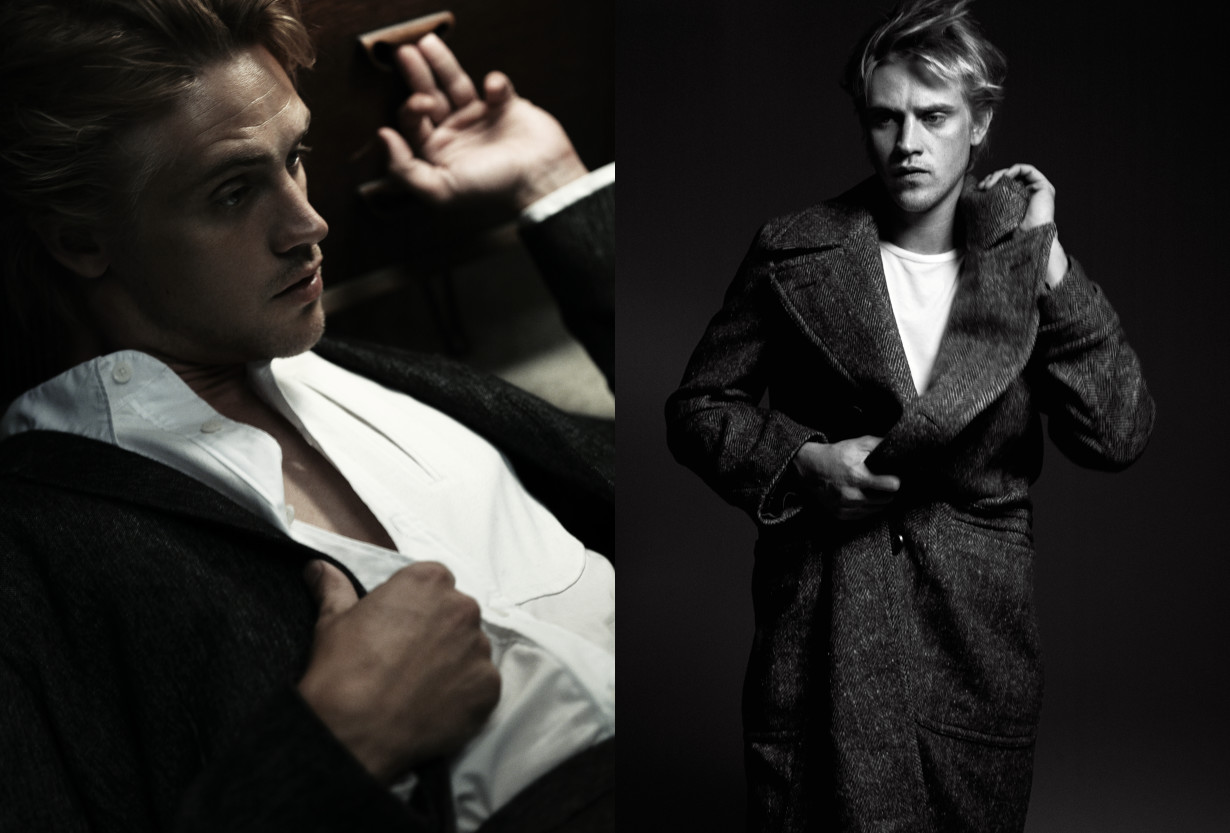 Originally published in the Fall 2012 issue.

Ask any male model what he really wants to do, and chances are high he’ll tell you he’s taking acting classes. But out of the thousands of would-be actors, few manage to make that unlikely career transition, and those who do rarely rise above the clutter of cheesy teen series and schlocky romantic comedies. Then there’s Boyd Holbrook.

Just this past summer, Holbrook spent July in New York filming the indie Very Good Girls—in which he plays the apex of a love triangle with Dakota Fanning and Elizabeth Olsen—and August working on Steven Soderbergh’s upcoming HBO Liberace biopic Behind the Candelabra, two more projects to add to his refreshingly well-shaped œuvre. “It’s a really well-written story of friendship and how that fabric can separate through the most minimal things, and people’s own struggles and insecurities and compensations and miscommunications,” he explains of the Very Good Girls script by Naomi Foner. “It’s about their desires and wants and how those clash and break apart.”

Holbrook says it’s exactly this sort of intimate study of human relationships that attracts him to the work he selects with discernment. “For me, it’s always about the writing,” he says of his decision process when reading scripts. “On top of that, I’m really attracted to raw people. That sounds a bit pretentious, but I’m drawn to people who are surviving and struggling and fighting for what they want and clashing against it, people who are pulled and torn in different ways.”

It’s a theme that comes through clearly in his endeavors, including Uncle Sam, a film he will direct next year from his own screenplay about a pair of friends from East Kentucky in 2003. “It’s a coming-of-age story where they’re trying to escape from this world, and they’ve enlisted into the military and it’s forty-eight hours before they get on the bus to boot camp,” he explains. “It’s a story about friendship and struggle in spite of the world. I come from such a geographically isolated part of the country where there’s not really that many opportunities, so it’s about the unknown of discovering your dreams when you don’t even know what they are—and fighting tooth-and-nail to get them.” Holbrook, who began modeling at twenty-one, says he came to acting in a roundabout way. “As a kid I was really interested in drawing,” he explains. “It wasn’t until I was in my teens that I became aware of film as a medium for storytelling.” He got his start working behind-the-scenes building sets at a local theater company in his native Kentucky, an experience that would eventually help him realize that he was ready for a change. “I was meeting kids there from all over the country, and then I got the grand idea that I should move to New York,” he says. “I got really lucky and a woman came by and asked if she could take my photograph and she sent it to a modeling agency. Then I got a ticket up here and I basically never went back.”

After several successful years as a model—during which he was featured in i-D, Vogue Hommes International, and VMAN, as well as campaigns for Hugo Boss, H&M, Dior Homme, and Viktor & Rolf—Holbrook, who studied psychology at college in Louisville, began taking, yes, drama courses at the William Esper Studio. Although he specialized in theater—his first love—he made a propitious film début as gay rights activist Denton Smith in Gus Van Sant’s 2008 film Milk opposite Sean Penn and James Franco. “I gave a screenplay that I’d written to Gus because I wanted to see what he thought about the work, and he ended up offering me a small part,” Holbrook explains. “It was a great learning experience. Not really having much experience in film, that sort of demystified the whole thing.”

In the years since, Holbrook has worked with rising regularity in both film and television, appearing in Vera Farmiga’s directorial début Higher Ground as well as with Laura Linney on Showtime’s The Big C and Kevin Costner on the History Channel’s Hatfields & McCoys. He now lives in Los Angeles on the rare occasions he’s not shooting elsewhere, but he has never lost touch with home. If you ask Holbrook about his inspirations, he’ll name a handful of heavyweights—Terrence Malick, Tennessee Williams, and John Cassavetes among them—but first and foremost is his family. “I never really had a lot of literature or music growing up,” he says. “I just had the people in my community, who I guess were the storytellers that I learned from. I would sit on my porch and whittle with my great-grandmother, and my grandfather would tell me stories of what life was like when he was a kid growing up.”

That devotion to his roots has helped Holbrook maintain a clear-eyed perspective and open mind as his career has taken its upward trajectory. “There are so many ways to tell a story,” he says. “For me acting is a great platform for that expression, but there’s also so many other ways too, and they’re all so different. I feel like music and acting are much more physical, whereas with writing, you’re basically just locking yourself off in a room and cutting yourself off from civilization for days and weeks at a time.” And Holbrook—who has also exhibited his sculpture at RARE Gallery in New York’s Chelsea—says any (or all) of those avenues suits him just fine. “There’s a lot of ways to go, so I don’t really have any idea which route it’s going. It’s not really a concern for me.”