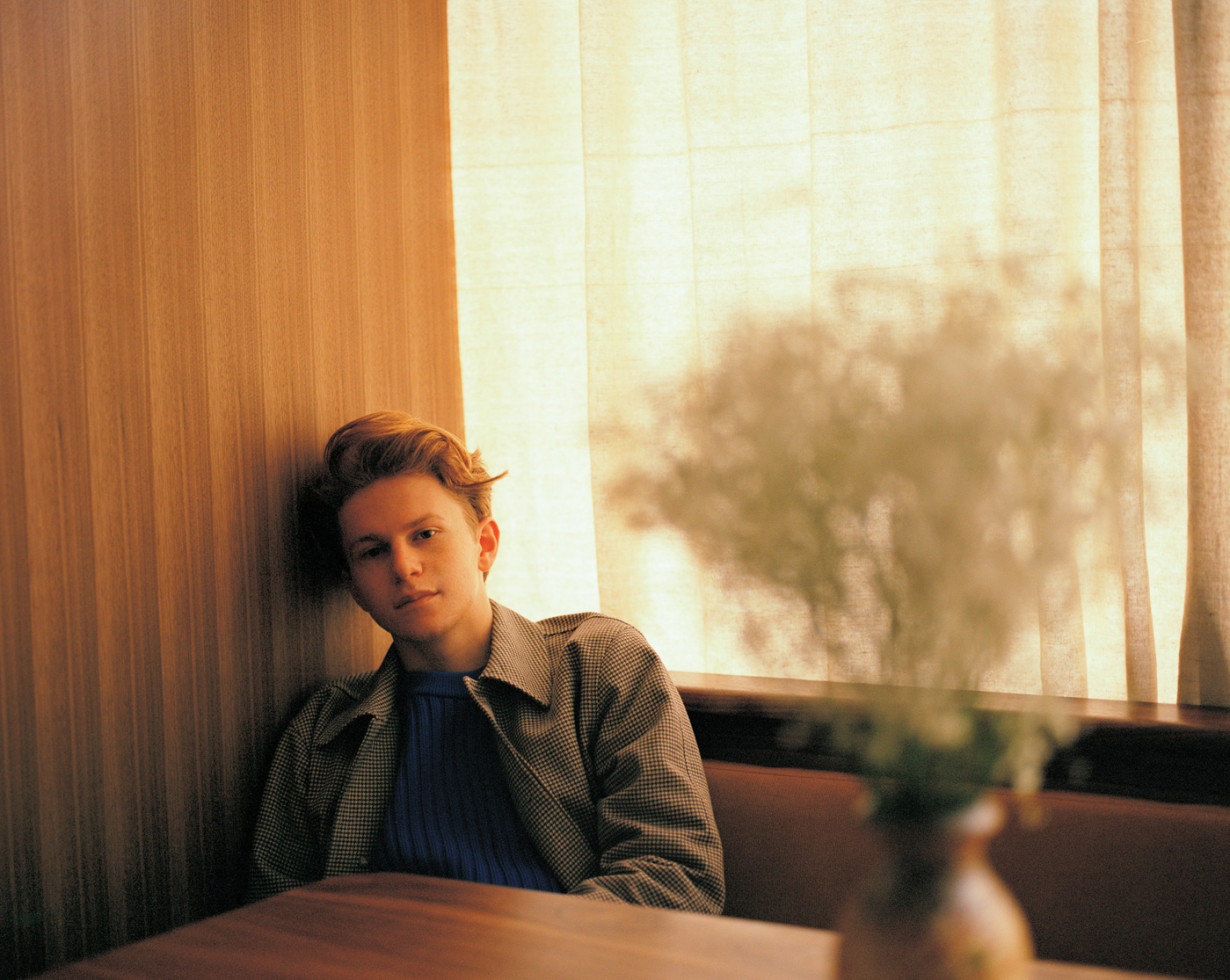 Coat by A.P.C. Sweater by Ami.

Gem, a set menu experience from the mind and palate of Flynn McGarry, is a young restaurant. It quietly opened its elevated dining and day-time coffee concept on an unpopulated stretch of New York’s Lower East Side this spring to near-constant full rooms and high praise.

Gem is young in its step but also in its approach. Over its opening months, McGarry and his team have tweaked and tinkered with nearly every facet of the experience to live somewhere between fine dining—a term McGarry resists—and the loose dinner parties held among good friends. “If I was a different kind of person, I’d be more relaxed,” McGarry says, sipping a coffee at the bespoke tables he sketched and commissioned for Gem’s dining room. “I mean literally since service we’ve already changed how you eat your meal here.”

For McGarry, that means different permutations of a twelve-or-so-course meal that sometimes begins in an anteroom with Champagne and small bites like smoked trout tostadas or Ritz crackers topped with foie gras, only to transition to more filling dishes in the main dining room, which run the gamut from bowls of silken tofu and oyster to “family-style” pasta dishes meant to be spooned and shared between all guests and large-format dishes that crown each meal. It’s a concept that is both informal in its spirit and refined in its execution—a hybrid approach to fine dining that takes itself just slightly less seriously. On one night at Gem, smoky lamb was served with an accouterment of dips, vessels, and greens. Dessert is more casual, encouraging long hangs and communal conversation between guests and chef. “I have such a specific idea of exactly what I want right now for the restaurant,” McGarry says. “I’m really happy with the experience, but I know we can make it better. I will gladly work until we do.” McGarry has been working towards Gem since he began cooking eight years ago. That timeline can feel accelerated considering that McGarry, only on the cusp of twenty years old, has already been on the cover of magazines and driven pop-up restaurants around the globe. While he first entered the spotlight in part because of his age, he has built a bonafide career out of kitchen fundamentals and an insatiable work ethic.

For Gem and McGarry, it’s a balance of the culinary finesse that commands a $155 price tag and the more informal vibe of the whole experience. “I would never ever in a dinner party in my own house make that smoked trout dish,” he explains. “I want that in restaurant. I think that’s delicious. If I served that to you in my apartment you’d be like, ‘What kind of psychopath is he?’ Straight up, if I said, ‘Yeah, come over for dinner,’ and I had like a twelve-course meal, I think my friends would need to have a conversation with me. That’s why I love [Gem] because I get to fulfill both parts of cooking that I love. I have dishes that are super rustic and tasty. I think that gets lost a lot in restaurants that try to make everything a jewel box. We get to do both.”

Small bites, like a charred beet steak and the playful Ritz bites, have become a staple throughout McGarry’s roughly eight years as a working chef. Seeing McGarry through his food is to witness a mingling of culinary influences—American creativity, Italian simplicity, French technique, Japanese ingredients. Seeing McGarry through Gem is to understand his thoughtfulness for design, from the gently separated dining tables to the wide-open kitchen format, from the fine-stemmed glassware to the floral arrangements that McGarry crafts as a morning meditation. Seeing McGarry in person is to realize that he has made all of this possible before the age of twenty.

“That’s been so on the forefront,” McGarry says about the obsession with his youth. “It always comes up, which I always thought was interesting. People will straight up be like, ‘You’re that kid chef.’ Last night someone said to me, ‘I guess you’re the Justin Bieber chef.'” Part of that reputation—which has both amplified and handicapped McGarry’s career—is thanks to a New York Times Magazine cover feature on McGarry when he was just fifteen. “Everyone’s skeptical,” he adds, “whether it’s skeptical of if I can cook or whether it’s skeptical if I’m going to burn out too quickly.” During that time, McGarry’s friends and family recorded the young chef’s successes and failures, creating a documentary film, Chef Flynn, that highlights McGarry’s origin story up through the release of Gem and recently screened at Sundance and South by Southwest. In McGarry’s opinion, it’s a genuine corrective to the narrative that his success was privileged. “Everyone thinks I had a state-of-the-art kitchen in my bedroom,” McGarry says. “Literally my dad and I went to Home Depot, bought wood that cost a couple hundred dollars, built some tables, and bought two induction burners that were the cheapest ones I could get. It looked good, but in the same way how I literally built half of [Gem’s] kitchen because we were going over budget. I’m just really scrappy and we know how to make things work.”

McGarry enjoys the work. Food, design, and experience are all on the chef’s mind as Gem continues to find its step and mature within a hybrid culinary space that sits between informal and elevated dining. “People have some wild conspiracy theories about what goes on here,” he says. “It’s not just my name. I’m here every single night cooking and I think it makes it a lot more real. I’m gonna be here every single night from the start of the day until the last person leaves. I think I’m doing everything that I can. That’s the thing, there’s nothing worse than feeling like you’re not realizing all you could be.” Coat by A.P.C. Sweater by Ami.