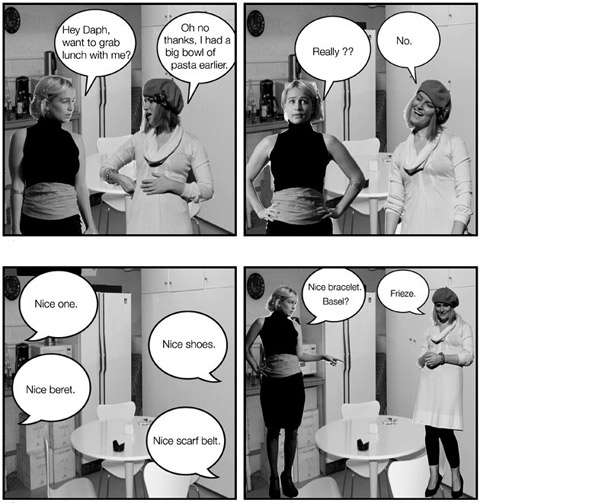 Every gallery has a Gallery Girl. They sit in their white cubes, answering the phones and making copies, catering to the inflated egos of their bosses, clients, and artists. Mary Blakemore, who knows from experience, began chronicling their goings-on in October 2008 in her photographic comic strip “Gallery Girls,” which Blakemore says is “a fantasy about minimum-wage glamour in New York more than it is a parody or a commentary.” Her characters, a collection of overeducated gallery girls in their early 20s who work at the fictitious Cecilia West Gallery, are portrayed by her charismatic friends in various states of dress-up. “I give everyone general ideas for comics I want to make and then photograph everyone acting them out,” she explains. “The images always come out better and different than I imagined. Later I construct a narrative based on them.” The Girls’ mundane tasks—sorting receipts from Basel, finding peacocks for artists, arranging conference calls—will be familiar to denizens of the art world, who will also find in the Girls’ drinking, partying, and self-medicating—and, vitally, their solipsism—thinly veiled jabs at a world built on image.