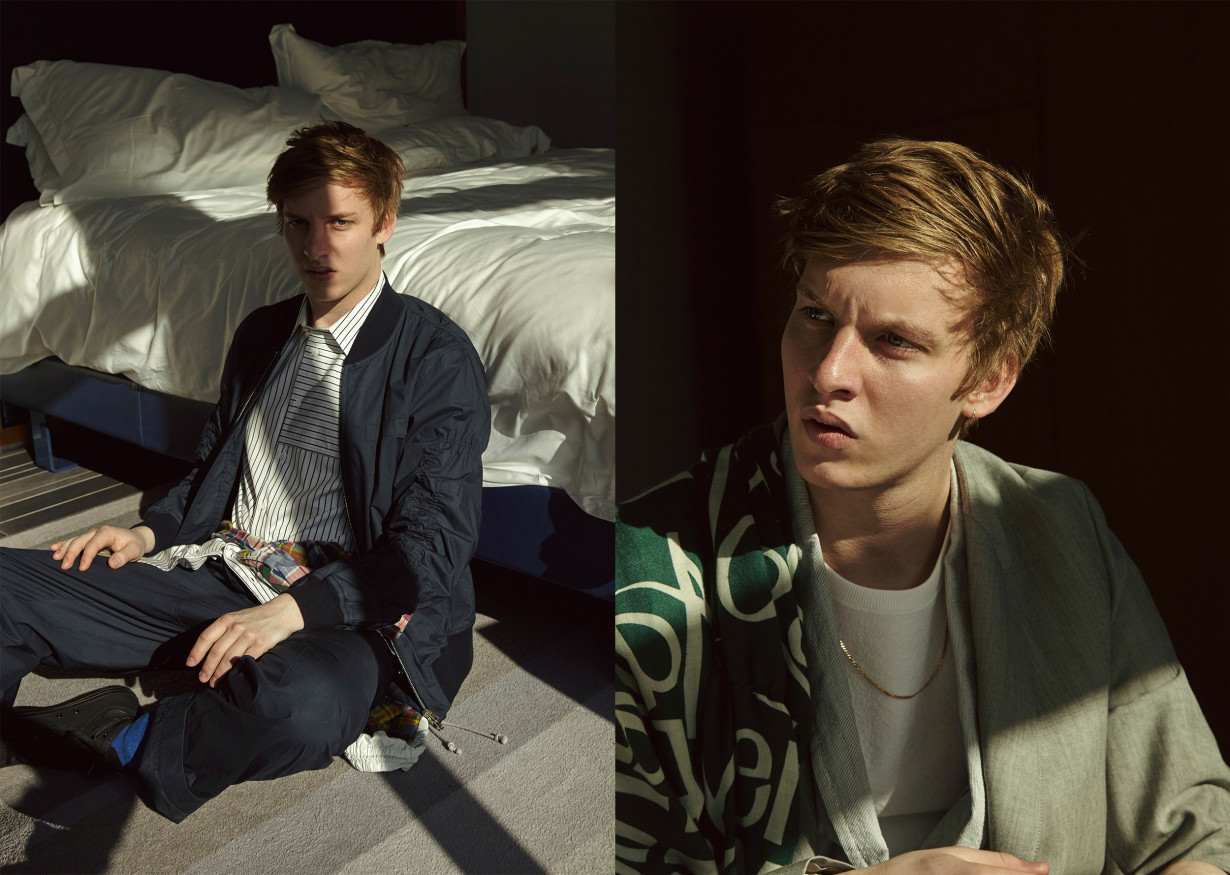 Left: Jacket, shirt, and trousers by Marni. Shirt, tied around waist, by Sacai. Socks by Calvin Klein. Sneakers by Converse. Earring, worn throughout, Ezra’s own.

Right: Jacket by Marni. Jacket, worn underneath, by Sacai. T-shirt by Calvin Klein. Scarf by Burberry Prorsum. Necklace, Ezra’s own.

When you tell people you’ve just interviewed George Ezra, the first question they ask is, “What’s his speaking voice like?”

It’s this voice—a reverberating, smoky baritone, alternately mournful and sweet—that first sets him apart from the seemingly endless stream of guitar-toting singer-songwriters from the UK, folk-pop sensations such as Ed Sheeran, Mumford & Sons, and Paolo Nutini. Though his irresistibly jaunty hit “Budapest” is as poppy as they come, his bluesy, weathered vocals lend it a sense of timelessness. The song feels as much at home on contemporary radio as it would have fifty years ago in a dusty bar in the Village.

Sitting down with him in the café at The Standard, East Village, on a sunny afternoon, it’s no surprise that his voice is, indeed, gravelly and deep. What is surprising, however, is the young man behind it: the twenty-one-year-old, clad in a wool sweater, is endearingly fresh-faced and quick to laugh, with a shock of blond hair topping his tall frame and, in his left ear, a tiny sliver of an earring. He’s avoiding drinks because he’s playing a show tonight, choosing juice instead (“How green is the green juice?”). He gestures animatedly when he’s excited about what he’s saying.

And what isn’t there to be excited about? This year, he was nominated for four BRIT Awards, and over the past two months he’s been opening for the omnipresent Sam Smith and fellow Columbia Records labelmate Hozier on a series of sold-out dates across the United States and Canada. At the end of March, he’ll start his first solo American tour and make his SNL début.

Though it may seem like his rise to fame happened overnight—his first EP, Did You Hear the Rain?, was only released in late 2013—he insists it’s taken years of work. “It’s strange from my position, because it feels as if everything’s happened quite organically and naturally, pace-wise,” he says. “My schedule is probably just as busy now as it was three years ago, but there’s just people at the gigs, you know?” Tempting as it is to chalk up his modesty to the good manners of a young Brit, there’s a calm solidity to Ezra that compels you to look deeper. Described by his tour manager as “an old head on young shoulders,” it’s apparent that he’s very aware of the forces that took him from playing dingy pubs in Camden to a world of Burberry endorsements and shows at Madison Square Garden. Ezra got his big break at eighteen when Columbia Records found his videos on YouTube, which he had uploaded while he was studying at the BIMM music school in Bristol. Acknowledging the vast pool of talent waiting to be discovered online, he’s anything but ungrateful. “I do constantly remind other people and myself that I’m lucky. There are things that have to align for things to work, and I think that luck is one of the biggest parts of that. You can have all the talent in the world, and you can be the nicest person in the world, and you can work the hardest, but without luck, you’re missing something.”

All modesty aside, Ezra showcases significant talents as both a songwriter and a musician. His debut album Wanted on Voyage (a phrase borrowed from the label on Paddington Bear’s suitcase), inspired by a solo train trip through Europe, is full of hyper-melodic, blues-based pop songs bearing the influence of American artists such as Bob Dylan, Lead Belly, and Woody Guthrie. Out of reverence for his musical heroes, he’s quick to clarify: “I actually hate it when I say this, because I would describe what I do as pop. Blues-pop should not exist. It’s kind of insulting to blues, so I try not to say it. I try to explain to people that it’s more the structure [that makes it pop].”

By combining the lilting choruses and repeating guitar licks of classic guitar-based pop with his big, throaty vocals, he’s crafted a cohesive and catchy album that is, in a word, happy; in a genre best represented by fashionably gloomy artists such as Jake Bugg and Passenger, the buoyancy of his music is refreshing. He recalls being confronted by a close friend in the early stages of songwriting: “[He] said to me, ‘When are you going to stop writing depressing music? You’re not a depressing guy, and everything you write is quite melancholy.’ And he was right! I guess I was trying to fit in.” Having taken this advice to heart, Ezra admits, “It made writing easier because it was more natural and honest—and more fun.”

Ezra thanks Dylan for teaching him to let his sense of humor infuse his songs. On the tongue-in-cheek “Drawing Board,” he dreams up revenge schemes targeting an ex-lover (“You said you needed a haircut/I recommended Mr. Todd”) and, on his first EP’s “Benjamin Twine,” he fantasizes about his best friend’s sister—“It’s not just me, either,” he insists, “She’s hot!” Even acting legend Sir Ian McKellen has joined in on the fun, making a cameo in the video for “Listen to the Man.”

If Ezra exudes the warmth and charm of a very stable boy next door, it comes from a genuine place. On his increasingly rare trips back home, he avoids high-profile events, preferring to see old friends at the local pub (“It’s the same with everyone else, they have girlfriends, and they have jobs, and they have lives they want to talk about.”), and he credits his sister, who tours with him, and the ability to turn his phone off for keeping him grounded. “Swipe up, airplane mode.”

There’s no denying the media’s pressure on young artists—especially well-behaved, uncontroversial ones—to develop an edge. “I feel like people sometimes look at me as if they want me to be, like, ‘I’m a rock climber!’” he laughs. “And I’m like, man, I don’t do anything.” Commenting on the sexier, grittier personas of other British chart-toppers, he says, “You can’t be like that when you go home to your mum, you know what I mean? Like, you should be the same as you are with your mum as you are with your fans, because you should be honest! That’s how it should be. Maybe that’s the least rock’n’roll thing I’ve ever said.”

Later that night, opening for Hozier, he’s in the spotlight as the seats at the legendary Beacon Theater begin to fill. “Why do you treat me so?” he slowly rumbles in a prelude to one of his darker tracks, “Did You Hear the Rain?” He repeats the line, without accompaniment, until the reverberations from his massive vocals send the crowd into silence. Finally, he launches into the full song with his band, letting his youthful exuberance take center stage and singing the only way he knows how: honestly.