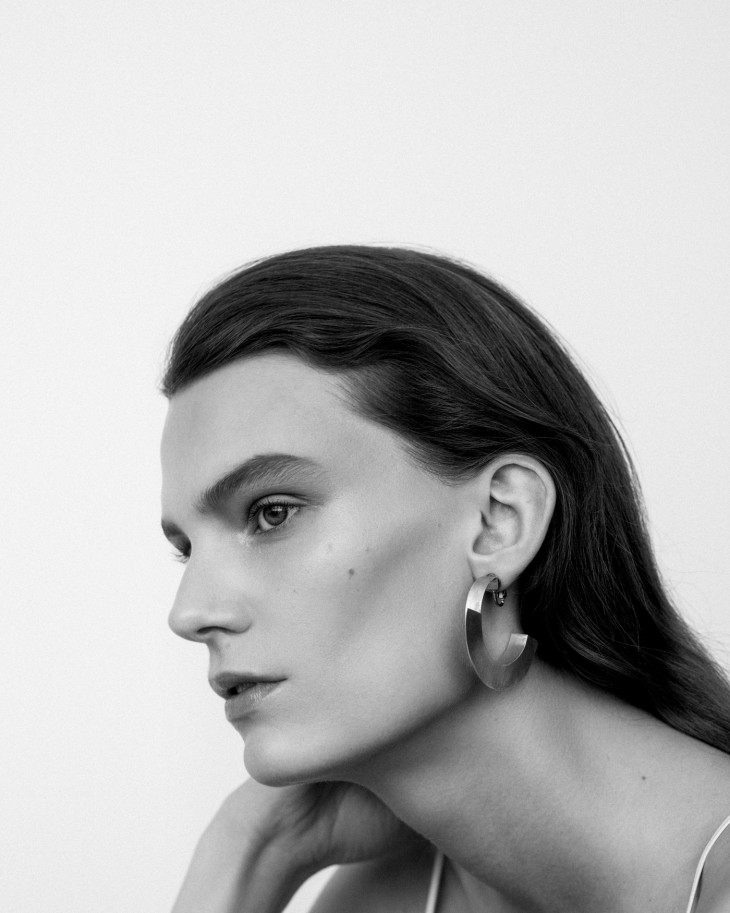 Top by The Row. Earrings by ARC.

Text and styling by
Ahnna Lee
Photography by
Thomas Slack

Daniela Jacobs founded ARC in 2014, a concept sprung from her growing devotion to both sustainability and mindfulness and realized as a collection of jewelry and home objects. Her tribal porcelain pieces are immediately recognizable for their ancient forms, echoing an older time through their broad, symmetrical arc shapes. The young designer hopes to “celebrate mindfulness; the beauty in small, transient moments in the everyday; and creative fluency” for herself and the wearer by hand-making all of her pieces and using primarily recycled, upcycled, and local materials. Her latest assortment, The Invisibles Collection, explores transparency in both a literal and figurative way. Jacobs explains that lucidity can hold a “strong presence even when it’s subtle” and that she is fascinated by “the ways in which negative space can become positive space,” depending on how it is perceived. The jewelry in her current collection is made mainly from upcycled plexiglass and her home objects honor transparency in the forms of Lucite furniture and glass art. Keen observers can spot an ARC Tall Slant Bangle on Iris Apfel’s colorfully adorned wrists and other supporters include the Cooper Hewitt, Smithsonian Design Museum and the Brooklyn Museum, both of which have exhibited Jacobs’s work for design enthusiasts—and for anyone who appreciates a mindful memento. Coat by Joseph. Earrings by AGMES.

Referencing shapes and lines found in the modernist sculpture work of Barbara Hepworth, Jean Arp, and Alberto Giacometti and mid-century glass art by André Thuret and Timo Sarpaneva, the sisters Morgan and Jaclyn Solomon offer an ode to all shapes minimalist and soft through the elegant and contemporary heirlooms of AGMES. Jewelry celebrating minimalist and modernist influences isn’t unfamiliar, but AGMES is committed to delivering not only outstanding quality and sophisticated, considered pieces in this vein, but also something rather overlooked: consistency. Every collection is an extension of their original concept, providing reliability for the women who love to wear AGMES but also staying true to what they are compelled to offer. The Solomons attract refined, independent women who appreciate art and endurance and, with all pieces made by hand in New York from recycled precious materials, they are dedicated to running a sustainable practice and keeping their carbon footprint to a bare minimum. Lastly, although the jewelry may look considerable in weight, the pieces are designed to be comfortably lightweight and easy to wear, yet another facet of a brand which is undoubtedly magnetic. London-based Rosh Mahtani started her line Alighieri in 2014 following her graduation from Oxford University and has since garnered a substantial following, including the creative director of Joseph, Louise Trotter, with whom she has collaborated for two collections. Known for her exceptional handcrafted, fragmented earrings and medallion necklaces, she brings no formal training except her extensive study of the works of Dante Alighieri, the Italian poet best known for his masterpiece the Divine Comedy. Alighieri, the brand, is Mahtani’s homage to the epic poem translated into jewelry and photography. In Dante’s lyrical portrayal of Hell, Purgatory, and Paradise—where he is confronted with frightful conditions and torn souls—he recounts his adventures in a hundred cantos, each serving as a potential source of inspiration for the jewelry Mahtani creates. Much like recently uncovered lost treasure, her pieces—first cast in wax, then bronzed and gold-plated—reveal their beautiful imperfections through fractured surfaces and primitive shapes upon closer review. For her most recent collection, The Dance of the Storm, based on the fifth canto of the poem, Mahtani evokes two lovers, Paolo and Francesca, who are trapped and bound in a storm, left with no recourse but to adapt. She discloses that this collection “explores the way in which we are subject to external forces and reminds us to dance with them as we go.” All clothing by Haider Ackermann. All jewelry by All Blues. Dress and boots by Ellery. All jewelry by Charlotte Chesnais.

Since debuting her sculptural, coiling, ANDAM Award-winning jewelry designs in polished silver and vermeil in 2015, Charlotte Chesnais has released six highly evolved collections, each one informing the next. Before launching her own line, Chesnais spent almost a decade at Balenciaga alongside Nicolas Ghesquière designing ready-to-wear and overseeing the 2009 launch of the house’s first jewelry line. She describes her creative process as fluid, like her pieces—free-flowing yet connected. Both at Balenciaga and in her later consulting work for Paco Rabanne, Maiyet, and Kenzo, among others, her approach to and process of designing ready-to-wear, leather goods, and jewelry were very similar, and she says adapting to different mediums and disciplines is a skill she established while working with Ghesquière. Chesnais entered into the realm of fine jewelry in 2016, continuing her signature style of figurative lines but now interpreted in diamonds and eighteen karat gold. The contrast between the two mediums—bold, blown silver and vermeil versus delicate, fine gold and diamonds drawn in circular strokes and orbiting between or curving near each other—is a conscious decision to allow both lines to juxtapose and coexist simultaneously. Leaving traces of a seemingly celestial spiral movement, her pieces, simple yet unexpected, are meant to be appreciated not only on the body but also as delicate objects in their own right. All clothing by Jil Sander. All jewelry by Mary MacGill.

Growing up in Manhattan, Mary MacGill spent her childhood summers on Block Island, an hour-long ferry ride off the Rhode Island shoreline. A haven of white bluffs surrounded by the vast ocean, the island is also where she initially sold her eponymous line herself at the local farmer’s market. She is now based between Block Island and her recently opened studio and shop in Germantown, New York, a considerable milestone for the young jeweler. At fifteen, MacGill met her longtime mentor, Kazuko Oshima—best known for her wire-wrapped stone pieces and Madonna’s veil in the video for “Like a Virgin”—and found herself on tea dates, browsing jewelry and searching for unusual stones in New York’s Diamond District. Influenced by Oshima’s vision, she explains, “I started out hammering gold wire on a large stone outside my house, making rudimentary chains and bracelets with semiprecious beads. I think I just wanted to go back to the simplest ways of making jewelry. I challenged myself to figure out how to make connections with wire without using heat or chemicals—and that became my æsthetic.” MacGill evolved towards using semiprecious stones such as moonstone, jasper, and citrine and credits the Northeastern shorelines and vast ocean for her affinity for baroque, silver-colored Tahitian pearls, whose unique and imperfect shapes heavily influenced her new body of work. An arresting facet of MacGill’s handmade jewelry is the suspension and tension she creates, whereby her stones and pearls float elegantly on delicate gold wire. Nothing is perfectly straight or smooth—in fact, her vision is to embrace imperfection and consider how the “human hand makes a new mark each time it is put to task.” All clothing by Haider Ackermann. Rings and hair clip by All Blues. Top by The Row. Trousers by Khaite. Earrings by ARC.

Fredrik Nathorst and Jacob Skragge founded All Blues in Stockholm in 2010 with the desire to fill a void in men’s jewelry offerings, later expanding into women’s jewelry in 2016. Their inspiration comes from everyday life, at least in their interpretation. At times, the inception also comes from a very personal place. A pair of earrings named “Mother” in the shape of a uterus, for example, celebrates both Nathorst’s mom and womanhood at large. The Marianne collection is dedicated to Skragge’s grandmother, who upon passing left him her favorite amber-beaded necklace, which the pair repurposed into thirty-seven individual earrings to be spread and shared all around the world, preserving her memory. Another notable line, Ruined Omelette, was conceived after Nathorst accidently dropped an egg on a Sunday morning last year and comprises earrings, necklaces, and even a hair clip in the form of egg shells, egg whites, and the yolk. Together with Stefano Catenacci, the head chef of Swedish Michelin-starred restaurant Operakällaren, they collaborated on a campaign, lookbook, and limited-edition cookbook, all staged at the restaurant—“to teach me how to make [an omelet] properly,” Nathorst writes on their website. The vision of All Blues is driven by pure fun and imbued with originality and an admirable offbeat quality—from their designs down to the packaging and art direction. The decision to remain local in all aspects, from sourcing recycled metals to working with leading artisans in a family-owned, third-generation foundry outside of Stockholm, was a meaningful one that is not to be altered. When asked who they are designing for, the duo replies, “our future wives.” Naturally. Earrings by All Blues.

Text and styling by
Ahnna Lee
Photography by
Thomas Slack