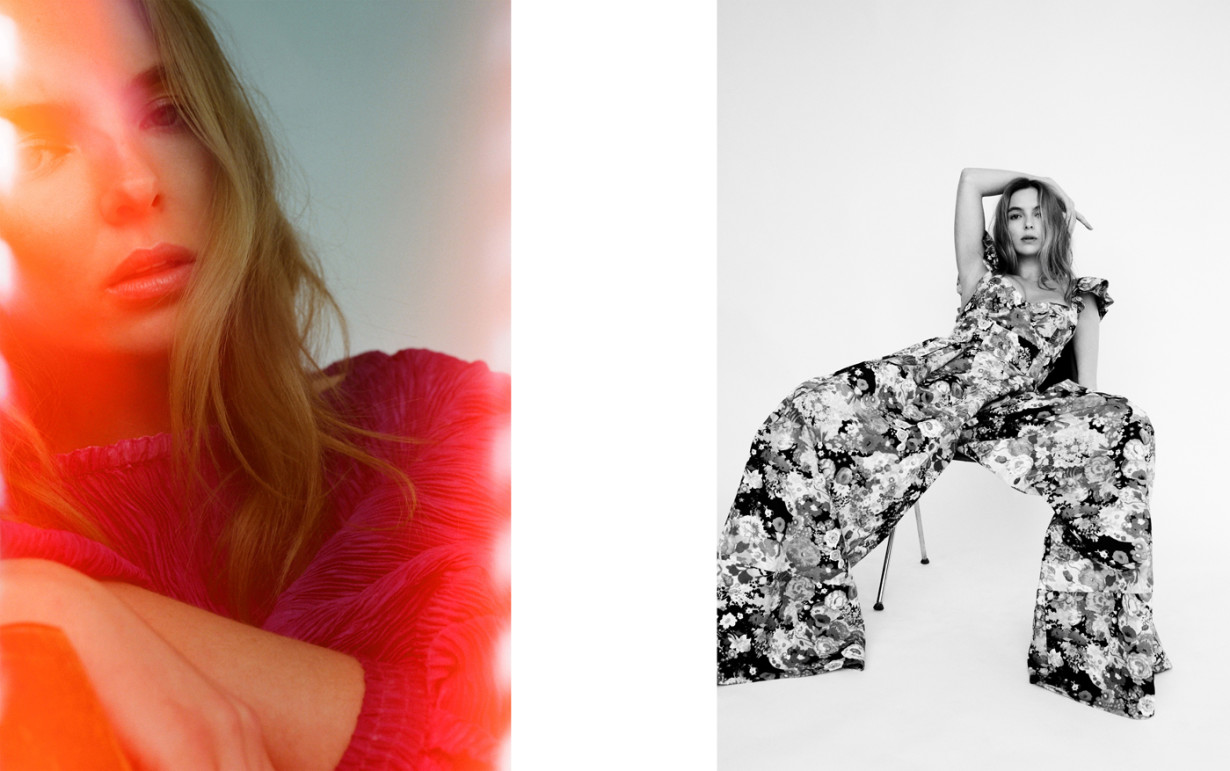 “They’re so transformative. As soon as you put them on, you already feel like you’ve stepped into someone else’s shoes, literally,” explains Jodie Comer, referring to her wardrobe as Elizabeth of York in the new Starz miniseries The White Princess. But despite the gowns and adornments, a conflicted character remains within them, which is just the type of role Comer embraces. The new show is only the first time American audiences can see the emotive performances she brings to her roles, but the young British actress has already been keenly building a career with compelling projects.

Comer fell into acting after her own teenage drama during her upbringing in Liverpool. She and her group of friends were set to perform a routine from Chicago in a talent show, until the group kicked her out for missing a rehearsal while on vacation. “For a thirteen-year-old girl, that was the worst thing that could happen in the world, traumatic,” says Comer with a laugh, fully recovered from the incident. But her mother encouraged her to do a monologue she had worked on instead. When her drama teacher heard it, she sent Comer to an audition for a BBC Four play, which she got. “It just snowballed from there. I’m a big believer in fate, and ‘right place right time,’ because I’m still friends with some of them now, and I think if I hadn’t have been left out…” she trails off, again with a wry smile.

She went on to perform in numerous British television series, but her first lead role was in My Mad Fat Diary, which ran from 2013 to 2015 and was about a teenager who retains mental health and body image issues after leaving a psychiatric ward; Comer played her popular best friend. “I thought what was quite unique about the show was it was tackling a very difficult subject matter with a lot of humor and fun,” she explains. With that experience, her inclination towards complex roles continued to grow: “I’m a very emotional person. I don’t know if that’s the Pisces in me. If I’m feeling a certain emotion, it’s usually the extreme of it, and I am drawn to more dramatic material.” She found a perfect fit, then, with Thirteen, a BBC miniseries about a woman who was abducted and imprisoned for thirteen years. “It was just something that I just realized that, no matter what, I would never ever know what these girls go through, so I was really going to have to do research and try and use my imagination,” she explains. “You often hear about these events that happen, these traumas, and you see them in the newspaper, and that’s it, you never hear about anything again. So it’s like the unknown of what they have to deal with.”

With The White Princess, Comer again has a robust role in which she exhibits all the facets of the princess during her ascent to the throne. Right from the start, you see her character in a range of emotions, but beneath the drama, she is a strong character. “You don’t get a lot of scripts like this, where the women are the ones taking charge,” Comer says. “In history, there’s not an awful lot of information written about the women because it was written by men for men, so this is taking everyone on a whole different insight.” This propensity is clear even in the beginning, when a scene in which King Henry insists on consummating a relationship that neither party wants to be in is depicted, at the insistence of showrunner Emma Frost, without the gratuitous brutality towards women that similar shows often use as a plot device. “Lizzie completely humiliates him, and she takes control, and then she realizes his weakness because he backs away, so I feel like Lizzie takes the power in that scene,” Comer says. “It was quite interesting, we had the screening the other night and people were applauding her and cheering and I was so taken aback. They were laughing at him being humiliated. In a good way, I was surprised, I was like, Wow, I don’t think this has been shown before.” Even the wardrobe that helped Comer first step into the role changes as the princess displays her strength and settles into her position. “They make your posture different, the way you walk, the weight of the costumes—and Lizzie’s costumes definitely evolve with her. At the beginning, everything is kind of pastels and voluptuous, and towards the end her costumes are very restricted and holding it together,” Comer says. “Kind of like armor, which was really cool.” Every detail was considered to offer a deep character study set amidst the politics of royalty, something both British and American viewers have a ceaseless fascination with. “I think it’s because we kind of put them on this pedestal, and they have a life that none of us will ever experience,” she surmises about this obsession. “They’re born into this grandeur, and it’s something that most of us will never ever experience. We assume they must lead very crazy lives, but they are just human at the end of the day.”

Later this year, Comer will appear in a film about the early life of Morrissey titled England Is Mine, in which she plays a woman who works with him. “She takes a real shine to him because he’s very different, but she kind of represents everything he hates.” With each role, Comer continues to showcase her penchant for interesting characters. The topic of darkness and black humor comes up again, in comparing British television with its American counterparts. “I think those types of stories fascinate people, trying to understand the human psyche and why these people do these things,” Comer says. “I also think that we’re just very nosy in general, we always want to know, we’re just very curious to learn.” That attitude could be what has brought her to such captivating roles and a promising career, but in her eyes, it might simply be about being in the right place at the right time.

The White Princess continues on Sundays on Starz. Left: Dress by Céline. Earring by WWAKE.
Right: All clothing by 3.1 Phillip Lim.