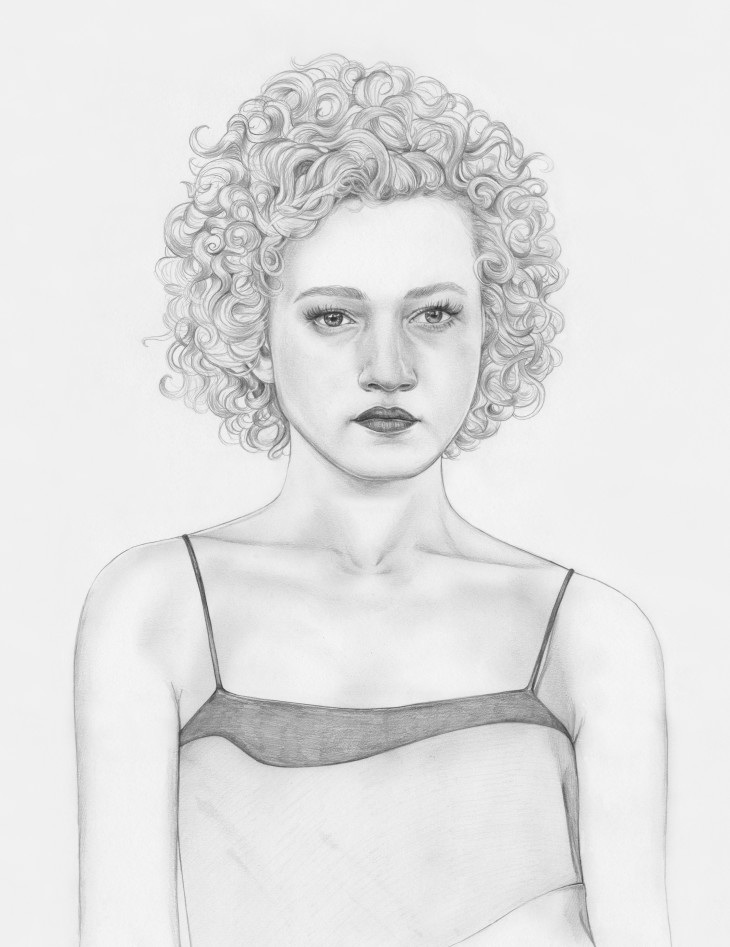 All clothing by Prabal Gurung.

“It’s so weird,” says Julia Garner. The 21-year-old actress, who first broke out in 2011’s cult psychological drama Martha Marcy May Marlene, is calling from British Columbia, where she is on set for Juanita Wilson’s Tomato Red some five hours north of Vancouver. She’s busy filming in the town of Ashcroft, but she’s able to escape for just long enough in between takes to jump on the phone. As she’s quick to point out, “This is not normal.”

The surreal element? It could easily be the fact that the New York native has been acting professionally (nonstop, for that matter) since she was fifteen—“I’ve kind of lost track of how many movies I’ve been in. I have to count on my hands,” she says. Or it could lie within experiences like flying straight from Sundance to eleventh-grade midterms (“I studied on the plane and came in with my swag bag,” giggles Garner). She could also be referencing the way that she’s worked, somewhat quietly and, until now, very much under mainstream attention, for such directors as Robert Rodriguez and David Chase over the past few years. Or just that she’s in rural Canada running to the phone when cameras are rolling. But for Garner, who is quick to ask you about your own hometown, why you choose to do what you do, and blush, quite noticeably against her porcelain skin, when you ask her to tell you more about herself, the weirdness is all “that I’m talking about myself.”

The young actress was born and raised in Ridgewood, New York, to an art teacher father and therapist mother. “My mother was an actress—a famous comedian back in the Seventies,” reflects Garner. “And she quit. She didn’t love it. [When I started,] she was like, ‘Are you sure? It’s not the best profession.’”

Garner got into acting because she was, self-admittedly, painfully shy. “That’s really how it happened,” she recalls. “I was so shy that I would talk to people, but it would be very hard for me because I was just so embarrassed constantly. With acting, you have no choice.”

She enrolled in drama classes with her older sister, Anna, for fun, and almost immediately fell in love with the process. “I remember the first time I got lost in the moment,” says Garner. “I was like, I can’t believe this is a career.”

An open-call audition for a role she didn’t get in a television show that bombed led to a call-in for Martha Marcy May Marlene. In the film, the then-fifteen-year-old took on the role of naïve, raised-in-the-fold cult member Sarah in Sean Durkin’s stomach-churning rumination on getting caught up off the grid. Awards (the Sundance Grand Jury Prize) and buzz came soon after, and new roles—as a fundamentalist Mormon teen who gets pregnant and runs away to Vegas (in Rebecca Thomas’ Electrick Children), a cannibal child (in Jim Mickle’s We Are What We Are), and the daughter of a spy seducing an older man (FX’s The Americans)—came one after the other. Garner dropped out of school midway through the eleventh grade and finished her GED on the road.

The actress’ latest project is Paul Weitz’s indie dramedy Grandma, out Friday, which follows the blonde, blue-eyed Sage (Garner) as she and her racy, acerbic grandma (Lily Tomlin) charge around Los Angeles in search of the six-hundred-some dollars the eighteen-year-old girl needs for an abortion later that day. The film is funny (especially Tomlin, who is generating fast early Oscar buzz), biting (Marcia Gay Harden plays Sage’s tightly wound, comically intimidating mother) and tenderly, brutally honest. It also gives a window into just how naturally Garner—who takes on roles that could easily be alienating or isolating, simply by nature of just how out there they are or the ways in which they work against the audience’s narrative hopes—can utterly transform a character. Sage is completely vulnerable in the most genuine, delicate, and developed way; Garner’s talent—the quiet sincerity she brings to her work—is obvious.

“I hope people just like the film,” reflects Garner on the project. “This movie isn’t about abortion. People always think that it is, but it’s not. It’s about three generations of women and how things change. For everyone, it’s different. I really hope that people aren’t going to look at it too negatively. I hope they’ll see it for what it is.”

For Garner, who takes Sage from a somewhat meek girl “who doesn’t know how to say no, how to say, ‘Screw you’” to someone “who wants to change” over the course of the movie, this role could very well be her louder breakout. “I always want to be on set working. I either want to be going in an audition room or I want to be acting,” says Garner, who comes home to her family’s place in New York to catch up with friends and visit art museums with her dad in between pictures. “I love it. It gets me every time.”

Grandma is out Friday from Sony Pictures Classics.