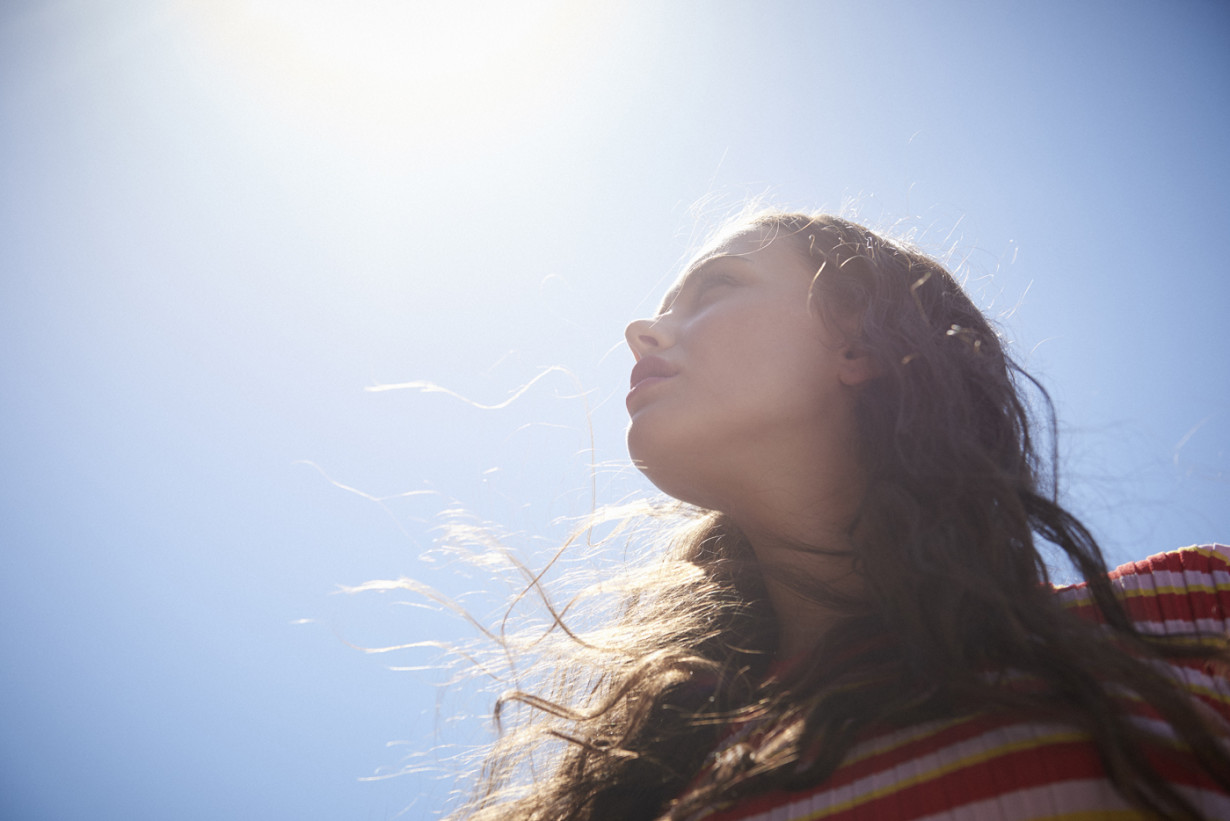 Katherine Langford isn’t like most twenty-year-old actresses. For one thing, her career path has been a very untraditional one to date. For another, she has only just “gone public” on Instagram. “It was a bit of a big decision for me actually, because I wanted to be an actor purely for the acting work,” Langford explains. “I have never been attracted to increasing my popularity or hireability by being on Instagram.” As the star of the popular and powerful new Netflix series 13 Reasons Why, Langford has experienced a year of firsts—her first television role, her first feature film, and now her first foray into the highly visible world of social media.

“I didn’t want to make myself a consumable product. I just wanted to be able to do my job and then disappear,” Langford says of making the leap on Instagram—where she has nonetheless quickly amassed over a million followers in about two months—although she admits that a fear of not taking “cool pictures” also played into it. Ultimately, the decision to put herself out there was inspired by fellow actress and 13 Reasons Why producer Selena Gomez. “Selena pointed out that the show is targeting young adults like me and that [social media] is a good medium to talk directly with those who relate to my character, Hannah.”

Here, Langford touches upon some of the show’s serious themes and why it’s important for her to be accessible to “anyone who has ever felt like an outcast or an outsider.” Although she is the series’ narrator, Hannah is a character that we get to know retrospectively on 13 Reasons Why, with the show’s present-day events take place after she has committed suicide. The titular thirteen reasons why are the people she blames in part for her death, forcing them to each confront their actions through a series of messages recorded on cassette that she leaves behind. It is understandable, then, that tackling issues like bullying, ostracization, and mental illness are all important factors in this young actress’ relationship to social media.

This consideration makes her seem wise beyond her years, and when asked if being on set makes her feel like she’s growing up faster, Langford agrees that she has definitely learned a lot about herself and her needs from both making 13 Reasons Why and the feature she is currently filming in Atlanta, Simon vs. The Homo Sapiens Agenda, in which she plays the best friend to Nick Robinson’s Simon, a closeted teenager who is blackmailed by a classmate about an online relationship with another boy. “I think you definitely learn a lot as an actor, because you’re dealing with people,” she says, “and the more you understand people, the more you learn about the world.”

As far as her own priorities go, spending some time back home in Perth, Australia, is a major one. Although her accent isn’t immediately detectable—the result of some quality dialogue coaching and a musical inclination (she performs original songs and plays piano)—the effervescent nature of our conversation feels undeniably familiar. Still unsure whether she will make the permanent move over to the States, it’s clear that Langford is about as down-to-earth as one can be in the midst of the modern entertainment industry.

The fact that she has managed to keep her feet so firmly planted on the ground is a testament to her character. Without a background in formal acting studies, Langford has quite literally been thrown into the industry headfirst. “I was accepted into the drama program at WAAPA,” she recalls of the prestigious Western Australian Academy of Performing Arts, “but at the same time, I met with my US managers and they asked me to audition for two different projects. So I ended up having to decide whether to go to drama school or test for network.” In the end, she decided upon the latter. After that audition, Langford was promptly cast for 13 Reasons Why and then “Simon,” as she affectionately calls it, straight off the back of that role—all quite impressive for someone without a history of technical training. “I have probably taken one of the most untraditional pathways to where I am now,” she says, describing her first test via Skype with the show’s director, Tom McCarthy. Langford recalls that encounter nonchalantly enough, but the Tom McCarthy in question also happens to be the Oscar-winnin writer and director of Spotlight.

Understandably, Langford has learned a lot on the job—and this setup seems to suit her personality perfectly. “I notice that a lot of what I do is quite instinctual,” she explains, “but it would be cool to get some more technical training, just to hone some of my techniques or to learn new ones.” With this in mind, making more music and exploring theater are both pursuits that the actress is interested in: “Open creativity is where I really find my zone,” she says. Beyond that, she is just excited to embrace each new opportunity as it comes.

What we know about Katherine Langford already in her still-young career is that she’s not afraid to tackle the big issues—mental health with 13 Reasons Why and sexual orientation with Simon, an LGBTQ film from a big studio, which she points out remains a rare feat. And Langford couldn’t be happier to be a part of boundary-pushing roles like these. This sense of fearlessness with her subject matter, as well as that commanding presence onscreen, suggests we’ll be seeing a lot more of her vivacious ways in the years to come.

13 Reasons Why is currently available on Netflix.