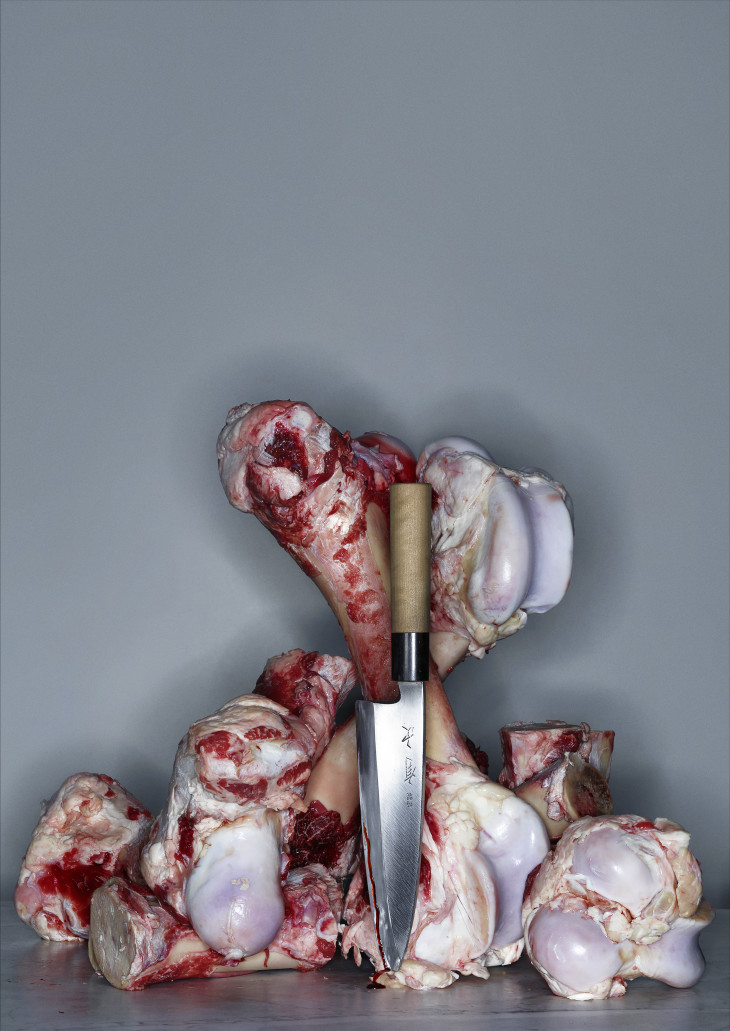 Prop styling by Michael Reynolds. Special thanks to Kimi Suzuki.

Every knife has a finite life. The more it’s used and sharpened, the more that it cuts–separating fat from flesh or root from bulb—the smaller and thinner it becomes until it dulls, breaks, or is replaced. “When my favorite knife got a big nick in it, I had to sharpen it to be smaller,” says Keigo Yamaguchi, butcher at Japan Premium Beef in New York’s Nolita. “I’m going to continue to use it, but if that cannot resolve the problem, I have to let it go. The shape has changed dramatically already.”

A knife is reflective of the chef that uses it. There is a balance, curve, and shape that speaks to the work they do and the grace, or brute force, they require. Yamaguchi began his career six years ago as a chef in Japan. His passion for steak—Premium Beef specializes in remarkably well-marbled wagyu beef, along with other Japanese staples like kiriotoshi pork—brought him to America and to the shop, where he’s been working for two years. He’s been using the same knife—his first—ever since. “It’s always a dilemma for me,” Yamaguchi says, picking up his knife, “because the more I care about this knife, the more I take care of it, the smaller it gets, the shorter life it has, but maintenance is part of our craft. This requires good care. If I used a stainless-steel knife, it might last longer, but even still, I like to put my love into this knife.” Yamaguchi lays it down next to his two other personal knives in a supple brown leather sleeve and gestures down to his shoes. “Same with these, I’ve had these boots for eight years.”

The shop is filled with memory items—tools that hold meaning not just for their utility but for what they say about their owner. Yamaguchi’s knives are ones a chef would use, made from specialized carbon steel rather than the stolid stainless steel found most everywhere else. It’s denser and sharper, but susceptible to the elements. One day of neglect could subject Yamaguchi’s knives to a resharpening—essentially grinding out their impurity—reducing their lifespan in the process.

Before that happens, Yamaguchi dreams of opening a restaurant under the Japan Premium Beef umbrella, preparing in a relaxed way the special cuts of beef that he’s able to procure. By then, there might be a new knife in hand, even though he prefers not to think about it. Yamaguchi understands that any nick, stain, or scar will be well earned. “If something happens to my knife, some trauma, then I believe it was meant to happen. Taking care of it is also part of my responsibility to my knife.”

Prop styling by Michael Reynolds. Special thanks to Kimi Suzuki.