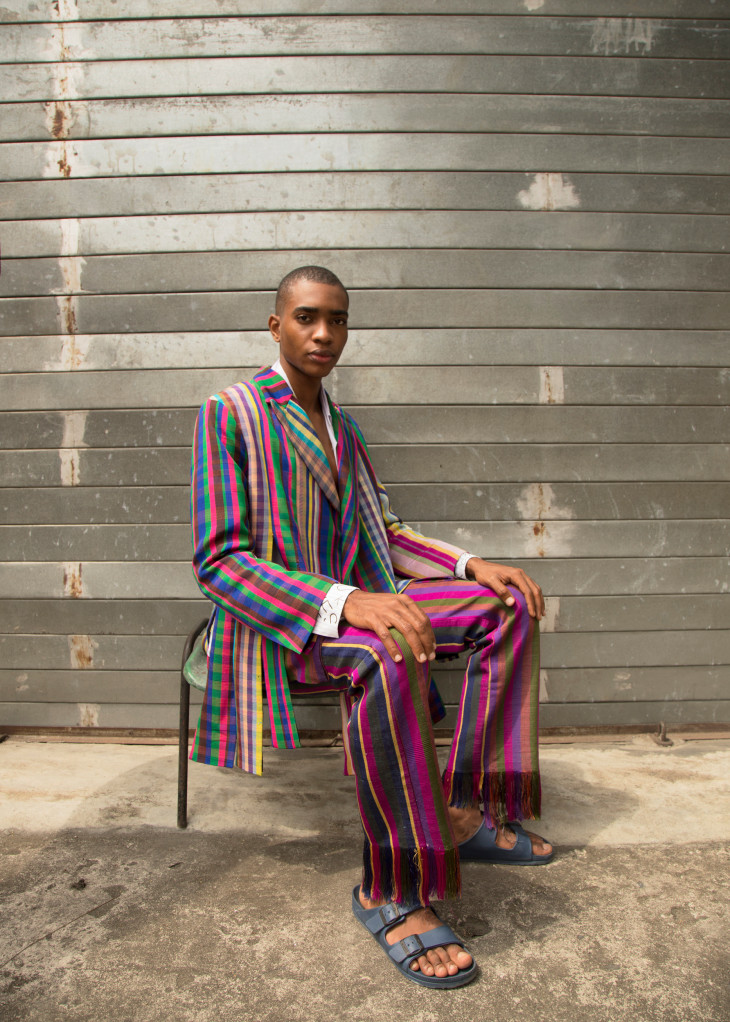 All clothing throughout by Kenneth Ize.

By
Rosie Dalton
Photography and styling by
Stephen Tayo

Kenneth Izedonmwen weaves cultural history and contemporary sustainability into his multicolored workwear for men and women. As one of the first two African designers ever nominated for the LVMH Prize this year, Izedonmwen’s label Kenneth Ize is helping to put Lagos on the global fashion map.

The Nigerian designer grew up in Vienna but returned to his parents’ hometown of Lagos a few years ago to launch his gender-neutral namesake brand. Having studied at Austria’s University of Applied Arts under notable professors like Hussein Chalayan, Izedonmwen decided he wanted to work with highly skilled artisans back in Africa to support the continuation of traditional fabric-making techniques using time-worn wooden looms there. “Traditionally, there hasn’t been a ready-to-wear industry in Nigeria,” Izedonmwen explains. “When I moved back home to Nigeria, I wanted to take this opportunity to actually work with Africans and [to celebrate] all kinds of craftsmanship in one space,” which he achieved by setting up his own studio in Lagos where all of his fabrics are now made by hand.

As unique as works of art, Kenneth Ize fabrics are highly covetable, yet his creations are also surprisingly wearable, with an in-built sense of utility about them. This quality can be seen in his softly tailored designs, like colorful printed blazers and plaid fringing. That inherent wearability has earned the young designer fans among the likes of Donald Glover (aka Childish Gambino), who wore a bright pair of fringed Kenneth Ize trousers onstage at this year’s Diamond Ball, hosted by Rihanna. What began as a predominantly menswear brand in 2016, though, has now grown to include the world of womenswear as well—which is the result of Izedonmwen’s rapidly growing female fan base. With women initially accounting for the majority of his menswear sales, the designer quickly saw a trend emerging, in part thanks to his celebrity clients like Beyoncé and Naomi Campbell. So it made perfect sense when, in April this year, Izedonmwen presented his first womenswear collection on the runway at Arise Fashion Week in Lagos—which was modeled by none other than Miss Campbell herself.

There is a certain optimism about Kenneth Ize’s technicolored woven pieces which transcends barriers such as age and gender. Much of this attitude, the designer says, also has to do with the handmade nature of his designs. “[Africa] creates value in clothes because the [garments] here are made by humans,” Izedonmwen explains, “and for me, it’s more meaningful when clothes have been made by hand.”

To that end, from his studio in Lagos, Izedonmwen employs a small group of skilled artisans—some of whom he has now been working with for the past five years. He believes that these close relationships transfer onto the clothes and can help make them particularly special for the wearer. “It’s just something tactile—you know how much work has gone into it so it creates a certain value,” Izedonmwen says, adding that this sense of value can help encourage customers to hold onto their pieces for longer. In this way, he is also forcing himself and his customer to consider the lifespan of his designs, doing so by celebrating quality craftsmanship above all else. “Africa is a Third World continent, so this is the kingdom where [sustainability] needs to happen because it’s still so fresh here,” he continues. “Fashion is not polluted here [yet].” With this opportunity in mind, Izedonmwen hopes to slow down the system. “There is no other way I want to do it,” he adds. “There’s no way I could produce five hundred units of a women’s jacket in Africa. It’s just impossible,” as some of his fabrics can take a whole day to make.

By creating unique handwoven African fabrics such as Yoruba aso oke (a traditional cloth denoting high prestige) from scratch, Izedonmwen and his team are championing a particularly beautiful brand of slow fashion—one that is as much about the social development of celebrating African craftsmanship as it is about encouraging customers to connect with the people that make their clothes. By
Rosie Dalton
Photography and styling by
Stephen Tayo