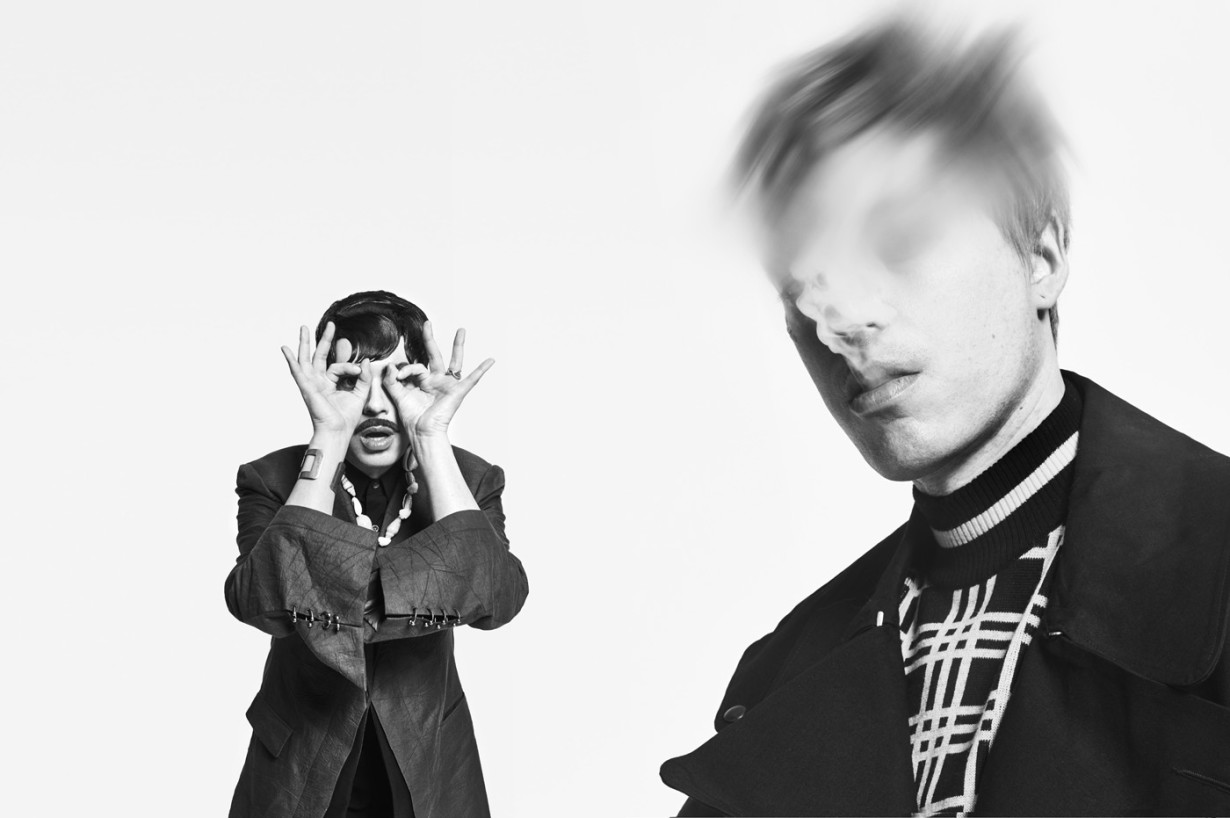 Lawrence Rothman arrives for the photoshoot as Orion. Orion has clear pale skin and startlingly translucent eyes; they’re sharply dressed in monochrome with the tail of their black mullet hanging down their back. Orion is one of Rothman’s nine Alters, the name they have given their cast of internal characters. Each Alter has their own story and sense of style; the small wheeled suitcase Rothman brings contains costume changes. These characters aren’t for the purpose of performance; they are expressions of their changing daily identity.

The Los Angeles-based artist is in New York promoting their début album The Book of Law, an avant-pop record of distorted R&B sounds and soul-searching sadness. Produced by Justin Raisen (Sky Ferreira, Charli XCX), the roll call of featured artists testifies to Rothman’s genre-hopping approach: Kim Gordon, Marissa Nadler, Angel Olsen, Warpaint’s Stella Mozgawa on drums, Duff McKagan of Guns N’ Roses on bass, and Thundercat’s Dennis Hamm on piano. Rothman, who has been on the scene but under the radar since the 2000s, says they put together a dream list of collaborators and Raisen secured each one. Every track is sung by a different Alter and the accompanying videos—created in collaboration with Floria Sigismondi, who famously directed Marilyn Manson’s “The Beautiful People”—offer a stunningly rich visual narrative, as much a signature of their work as the music. From left, Orion wears vintage jacket from What Goes Around Comes Around, New York. Shirt by Ann Demeulemeester. Trousers and earring, stylist’s own. Hooky wears all clothing by Fendi. Before the photoshoot, Rothman, thirty-five, unzips the wheeled suitcase and, while laying out wigs corresponding to each Alter, talks the team through the respective looks. “I don’t have the eyebrows for Nantucket, but I think you can do it if you block them out with makeup. I’ve done it like that before,” they explain amiably. The soft-spoken Nantucket has bleached-out albino locks and a frizzy white beard; they listen to Nico and Fleetwood Mac in their spare time. Then there’s the screen siren Elizabeth (à la Ms. Taylor), an air of tragic glamor about them. On the track “Geek” Elizabeth sings, “You’re perfect at being you/Don’t let them bully you/I know what it’s like to be confused/You know I’m a geek just like you,” a stirring synth-y ballad of solidarity.

An extraordinarily creative individual, Rothman is as much performance artist as singer-songwriter, though trying to categorize them seems to miss the point entirely. An easy visual reference is the work of Cindy Sherman, but for Rothman these aren’t costumes they assume to interrogate the world around them—each day they wake up feeling like a different Alter. (“I’m rarely just Plain Jane, unless I’m going to the beach,” they say.)

While this shapeshifting might sound like art school affectation, upon meeting Rothman—who comes across as immediately kind and sincere—it is obviously an integral part of who they are. “You know when you think inside your head and you hear a voice talking to yourself?” they explain. “Maybe you’re not talking to your present self; maybe you’re talking to versions of yourself that are connected to you, almost like angels. I feel everyone has different versions of themselves.” As a compulsive writer, each Alter has their own journal, which Rothman mines for song inspiration. It was their mother’s idea, however, to use their Alters in their music. “She knows all the names, because she was calling me them growing up,” they say. Their mother always supported their individuality and they were playing with ideas of gender and self-image from seven years old. But growing up as a non-binary youth in the conservative town of St. Louis exposed them to constant heckling and hassle. Homeschooled until fourth grade, it was a shock to discover other kids weren’t like them, and from owning it as the “weird kid” in school, the abuse escalated once they started touring with bands. They tell a harrowing story about being attacked after a gig in Texas during their senior year. Two assailants—off-duty National Guardsmen—held them down while a third pistol-whipped and shot at them. Rothman talks about painful subjects with a disarming candor; there is a sense they are done hiding.

It was a “massive blowout” with their father that pushed them to put their experiences into song. Rothman had already finished recording the original version of The Book of Law at the end of 2015, when in an angry phone call their father refused to accept their gender identity, and they have barely talked since. “That was the moment I knew I wanted to rerecord the vocals and rewrite the lyrics to be about my story and my whole life struggling with this,” they say. “If I’m going to make music I might as well make something that is completely honest and will help somebody get through a similar situation.” The resulting album is like memoir in music, sung in Rothman’s baritone voice, the adenoidal quality adding to its haunting strangeness. For example, “Wolves Still Cry” is an ode to their lifelong mantra, the wolves being the predatory Neanderthal jocks of this world. And catchy new wave track “Jordan,” featuring Kristin Kontrol, explores their sense of social alienation. In the accompanying video, Rothman is an astronaut floating around a suburban house observing a cast of glittering alien creatures in search of connection and tenderness. It culminates in them stripping them of their space suit armor and bringing them into their beautiful ranks, as the lyrics cry, “I’ve lived long enough in shame.” The aching longing is imbued with an inherent hopefulness that maybe there are other humans like ourselves out there.

Throughout the album, form smartly reflects content, with the subversion of genres in the music speaking to Rothman’s own rejection of binary labels. “Where we’re going, genre and gender feel completely outdated,” they say. “In one hundred years from now, it’ll be a completely genre- and genderless society.”

Rothman’s influences are naturally wide-ranging, from Leonard Cohen and Brian Eno to Tupac and R. Kelly. But most notable is their patron saint of creativity, David Bowie, both in Rothman’s use of character and costume as well as in tone, its somber synth often reminiscent of Blackstar. Rothman finished recording The Book of Law in January 2016, the same month Bowie’s final album came out, but there is more than a coincidental connection. Having met Bowie once, Rothman sent him an early track, “Montauk Fling,” and Bowie responded with an email encouraging them to pursue their talent. “He said, ‘Go through your artistic life so you don’t worry about what anybody’s thinking.’ That’s always been hard for me, because I hear the voices, but I was just like, ‘No, blinders on, I’m going to see this all the way through.’ There’s always going to be haters and lovers, and that’s just life.”

The Book of Law is out now. Rothman’s North American tour continues Tuesday at the Mercury Lounge, New York.