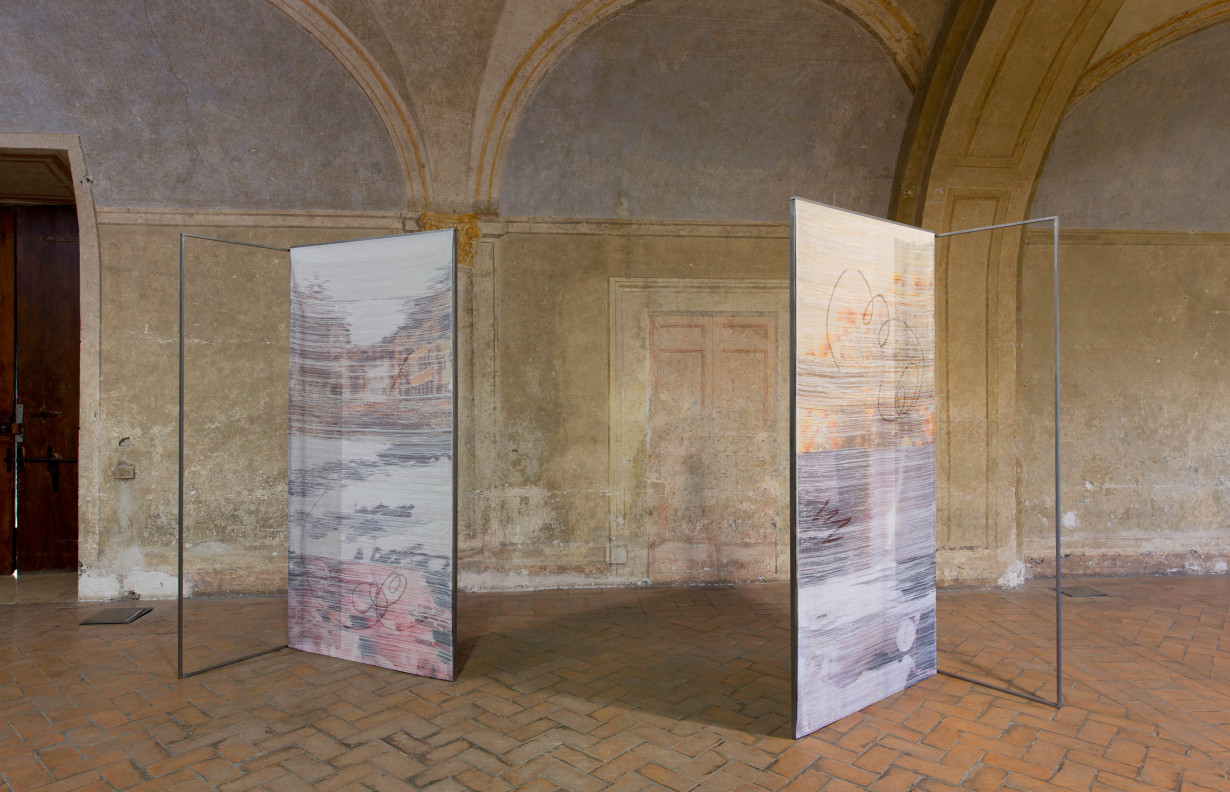 All images courtesy of the artist and Anat Ebgi Gallery, Los Angeles.

Margo Wolowiec’s tapestries exist in a state of pleasant friction, between abstraction and figuration, intention and accident, precision and chaos, subtlety and noise, staid technical tradition and the fleeting trends that are the mark of the contemporary.

The young artist, who was born in Detroit and now resides and works in New York, imbues her compositions with the deftness borne of an unavoidably methodical medium—weaving—and the incessant influx of disposable visual information that has come to represent the internet age.

Like her contemporary Erin M. Riley, whose work wickedly inverts any prim preconceptions one might have about the textile arts by depicting drunken and borderline pornographic acts lifted straight from found—and woefully regrettable—selfies and Snapchats, Wolowiec draws upon imagery from social media to drive her compositions. But Wolowiec’s approach is a more subtle one, much more restrained in its use of recognizable imagery and less of a one-liner in its finished form. Indeed, Wolowiec’s works, with their consistently muted palettes of soft blues, blushes and golds, are achingly beautiful to behold.

Wolowiec’s work is often written of using terms commonly applied to cinema and videography, and it’s easy to see why. Anyone who came of age with the VHS format likely remembers the way that the magnetic tape still vibrated with movement even with the pause button depressed and the uncanny and frequently beautiful chance images that one might capture by freezing the image into a eld of glowing horizontal striations.

The artist’s work suggests a form of scrambling or destabilization—a fly in the ointment, a flaw in the code—and its unfolding consequences. Wolowiec builds chance into her working method, hand-coloring the polymer threads that make up her compositions at the loom using dye sublimation ink and employing practices that allow for the pattern to go temporarily o the rails.

Wolowiec’s work relies on the incessant stream of random images that follows us through our daily lives, but, like all of us, she applies search terms and filters that carry personal meaning. For a recent show at New York’s Lisa Cooley gallery, “Corrections and Exposures,” Wolowiec chose to focus on internet-generated imagery of specific locations, namely the idyllic landscapes of Big Sur and Joshua Tree, which have personal significance for the artist, who relocated last year from sun-drenched California to grittier Brooklyn. Those images have the faded diffuseness of nostalgic reverie, of the shimmering contours of half-remembered vistas that work on the fallible human mind much the same way that the illusion of a moving image does.

Looking closer, Wolowiec’s work recalls the writing of Gilles Deleuze, whose theories of cinema spanned two volumes. Of the work of the director Max Ophüls, Deleuze wrote, “Ophüls’s images are perfect crystals. Their facets are oblique mirrors…And the mirrors are not content with reflecting the actual image, but constitute the prism, the lens where the split image constantly runs after itself to connect up with itself…On the track or in the crystal, the imprisoned characters bustle, acting and acted on…Crystalline perfection lets no outside subsist: there is no outside of the mirror or the film set, but only an obverse where the characters who disappear or die go, abandoned by life which thrusts itself back into the film set.”

Nearly thirty years on from Deleuze’s groundbreaking analysis, his ideas still ring true. As Wolowiec’s tapestries—both meticulous and prone to chance—so aptly and beautifully demonstrate, the image, be it cinematic or digital, nostalgic or encountered randomly and with no special meaning to the viewer, is the prismatic currency of our quotidian lives, and the stuff from which we weave meaning day in and out. All images courtesy of the artist and Anat Ebgi Gallery, Los Angeles.