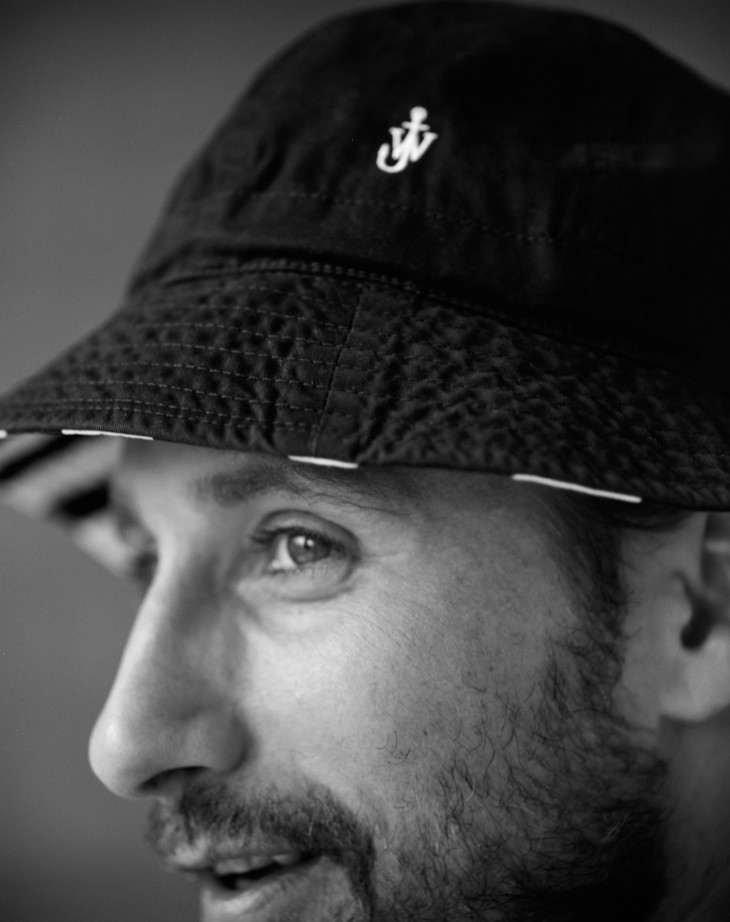 WC Fields famously admonished, “Never work with children or animals,” but that warning is one that Matthias Schoenaerts certainly hasn’t taken to heart. In his first international breakthrough, the Oscar-nominated Bullhead, the Belgian actor played a cattle farmer who gets caught up in organized crime, selling cows to criminals who then inject them with illegal hormones. In Far from the Madding Crowd, he was a shepherd competing against Michael Sheen and Tom Sturridge for the love of a farmer portrayed by Carey Mulligan. Even in the Golden Globe-nominated French hit Rust and Bone, there was always the looming presence of the orca that crushed Marion Cotillard’s legs, leaving the former animal trainer wheelchair-bound and in the care of Schoenaerts’s devoted mixed martial arts fighter. Shirt and trousers by Lemaire and Sunspel. T-shirt by The White Briefs.

In his latest film, The Mustang, the closest thing Schoenaerts has to a costar is the eponymous horse, a wild bronco he is meant to tame as part of a prisoner rehabilitation program while serving a sentence for domestic abuse. His Roman is taciturn and surly at first before gradually opening up as he builds a relationship with the horse he has named Marquis (after a name he reads in an equestrian magazine, although he pronounces it “Marcus”), exemplifying the unique combination of strength and sensitivity that Schoenaerts has become known for. The film, based on a real-life program in Nevada’s Carson City and directed by first-timer Laure de Clermont-Tonnerre, is stark and brutal at times, but also, with its desert landscapes, strikingly beautiful. But for Schoenaerts, the value of The Mustang lies in its message. Noting the Reform Alliance’s recent announcement of a fifty-million-dollar initiative spearheaded by Jay-Z and Meek Mill to fix the probation and parole system, he points out that the movie tackles “very relevant and urgent subject matter that’s been coming up lately.” “People are becoming more aware,” he adds, “of the importance of the circumstances of prisoners and rehabilitation programs.”

The Mustang, which premiered earlier this year at Sundance, carefully walks a fine line of humanizing its characters without forgiving their crimes. In a particularly gripping scene, Roman joins a support group where the other prisoners recount the amount of time—in seconds—between their initial thoughts and their crimes, along with the sentences they received as a result. What becomes clear is that these men should not be defined solely by the single action that changed the course of their lives, underscoring the possibility of rehabilitation. “I hope that it enables people to still believe in change and that nothing is ever truly irreversible—although some things are of course,” Schoenaerts says. “I think there’s a lot of things people can change and it’s important to keep believing in that. That support is very important in that process because people truly need each other.” In preparing for the role of Roman, Schoenaerts spent days at the maximum-security prisons Solano, San Quentin, and High Desert in California in intense conversation with prisoners to try to understand their deepest thoughts, motivations, and desires. “We went to talk with inmates to get an insight into several aspects of their psyche and what it means to live a life incarcerated,” he recalls. “What does that do to a human mind, to a human body, to a human soul? How can you maintain a level of sanity in there? How do you deal with guilt and responsibility and self-love, or the absence of those? How can you find, within a survivalist universe where everything is based on domination and manipulation and violence, a road that leads to self-worth and appreciation and redemption? Those are insane human journeys.” Left: Coat by Uniqlo x JW Anderson. Shirt and trousers by Lemaire and Sunspel.
Right: All clothing by Lemaire. Sneakers by Veja.

Roman’s overseer Myles is portrayed by the Oscar-nominated Bruce Dern, but many of his fellow inmates are played by actual alumni of the mustang training program. Working in close proximity to so many successful examples offered Schoenaerts a wealth of technical knowledge—his real-life experience learning to tame the horse mirrored Roman’s—but also a unique understanding of what the men learned about themselves in the process of working with these animals. “We had constant proof, a constant reminder of the beauty and the value of that program and the effectiveness of the program,” he explains. “Some of the gang leaders, you saw how they developed a completely different aspect of themselves through that rehabilitation program and how they rediscovered their own needs for affection and allowed themselves to have that need and developed a new kind of tenderness again through understanding that they had to look out for an animal.” Perhaps the men recognized something of themselves in the horses, the wild impulses to be tamed, the gentleness that could be released through just a little bit of compassion and understanding.

The essentialness of that underlying need for compassion, ultimately driving through all of us, is exactly what Schoenaerts hopes viewers will take away from the film. “We live in such an individualistic society, driven by our own desires, but we can’t do it without each other,” he elaborates. “We all need each other and that’s a very humbling realization. I think it’s transformative to realize how little effort it takes to make a deep, deep impact. It doesn’t take a lot to be kind to people. You can save lives with kindness, for real, and it costs you nothing. It sounds like a simple message, but it’s way more complex than it seems.”

The Mustang is out now. Left: All clothing by Lemaire. Sneakers by Veja.
Right: Coat by Uniqlo x JW Anderson. Trousers by Lemaire and Sunspel. Hat, stylist’s own.