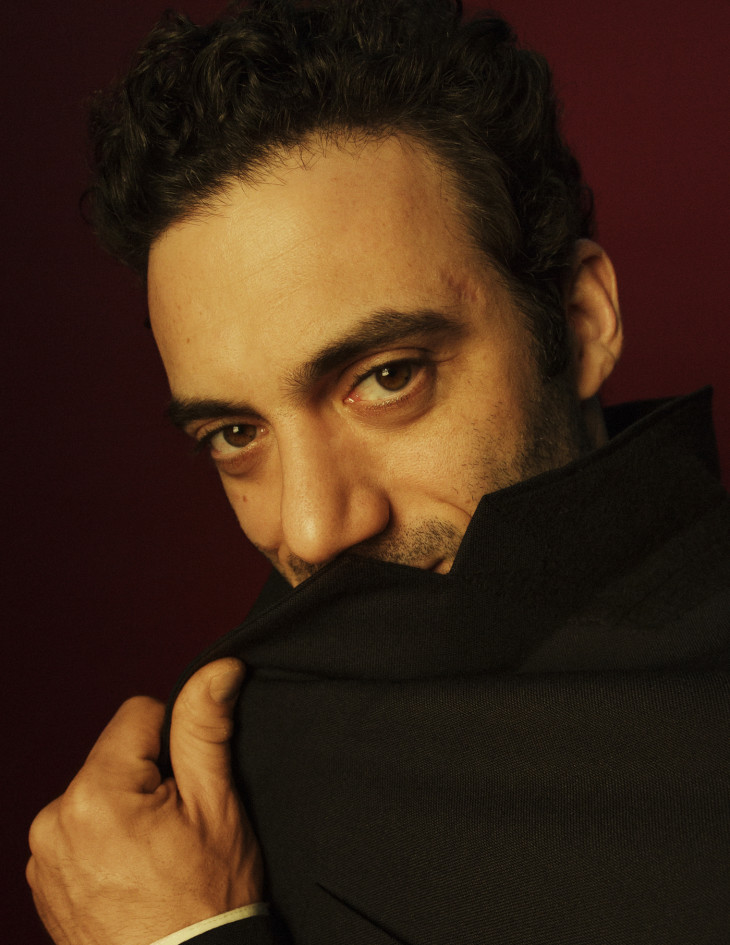 Many actors spend their careers trying to play the “great roles,” but for Morgan Spector the prospect of the new is always more desirable. “I want to be a part of work that I feel like is speaking to the present moment,” he says, “not necessarily in a didactic or political way, but in a way that makes the piece matter.” That drive has always translated to dark, challenging projects, and now, with a role opposite Claire Danes in the new season of Homeland, the 37-year-old actor’s penchant for deep stories gets its broadest audience yet.

Though classically trained as a theater actor, Spector is becoming increasingly known for his roles on film and television, having had roles in Boardwalk Empire, Chuck, and The Mist. But he’s always compelled to return to the stage: “I think of myself primarily as a theater actor, and I think that as I get more opportunities in television consistently, that becomes more a statement of purpose than an empirical observation.” While he sees the same potential in television, especially as it has matured into its most complex forms, it’s the inherent demands of the live performance that drive his passion for theater. “Every play, you have to learn what the play needs you to do as a performer to do that specific play,” he explains. “It forces you to grow, it forces you to acquire new skills, it forces you to become someone else a little bit. I think being pushed in that way is better for your work in every medium.”

Spector’s passion for acting started early in school plays, but he is not the type to label his profession a “calling,” instead choosing a simpler explanation for his lifelong proclivity towards the form. “There’s such a mythos of the tortured artist, and I think it’s quite destructive actually, because it’s enough to just say, ‘I like doing this,'” he argues. “It’s scary, but I like it. We’re such an anti-pleasure culture and I think the reason I act, the reason I’ve kept doing it, is because I like it. When I stop liking it I’ll stop doing it.” Still, he’s been acting for long enough to recognize that it’s the palpable feeling provided by theater that drove him to it in the first place. “When I was a kid, the thing that I immediately connected to and the thing that I’ve still connected to and the thing that makes me particularly love theater is the power of ensemble and the sense that you go out there every night together when you’re doing a play and you have a sense of what energy is passing between the audience and the company on stage and how you’re all handling that particular night, this particular moment on that night. There’s an endless fascination in that experience.” His most recent theatrical output was in a play called Animal by British playwright Clare Lizzimore in New York this past summer, centered around a woman experiencing postpartum psychosis. Though his real-life wife Rebecca Hall, who played the leading role, had the more emotionally taxing role, Spector still found a new challenge in the weighty material. “It was harrowing, actually,” he recalls. “I don’t usually feel that way about plays, but it was a hard show to do. It got really dark in the room and onstage. The director of the play was pregnant and my wife and I were talking about whether or not we were going to have a kid at the time. It was trying to reckon with that choice, while also considering this very real, but most nightmarish possibility.”

It wasn’t the first time Spector has starred alongside his wife, which has actually become somewhat common since the two first met on stage while doing the play Machinal on Broadway in 2014. “When you have two actors that both work, the risk is that you’re always ships in the night,” he says. “One of you is out of town or you’re both in different cities, and neither of us likes that very much, so when we can be in the same thing we don’t have to worry about that.” Practicality aside, Spector finds joy in acting with Hall: “The first relationship we ever had was just a professional camaraderie, so the first thing I learned about her was that respect for her talent. When you work with somebody who’s really good, they make you better and it’s a pleasure.” All clothing by Marni. Sneakers by Golden Goose Deluxe Brand.

The two also star together in the new movie Permission, but this time they’re a part of two different couples, each experiencing their own relationship pitfalls. When Spector’s character Reece drunkenly comments on the fact that Hall’s Anna has never been with anyone other than her boyfriend (played by Dan Stevens), it sets off a shaky chain of events for both couples. “It’s about those relationships in your late twenties, early thirties, where you know enough about yourself that you’re with great people and you know how to be in a good relationship, but it’s still not the right relationship,” he explains. “I think that’s an experience that a lot of people have had, where you’re like, There’s nothing really wrong with this person and yet, I have to go.”

Premiering this weekend alongside Permission is the new season of Homeland, and while there’s little Spector can reveal about his character, his engrossing style, combined with the series’ ongoing quality, is promising. His film A Vigilante with Olivia Wilde will be released later this year and until then, his attention is shifting to being a first-time parent. But if his past is anything to draw from, his next role will be as interesting as they’ve all been. “The truth is, when people are trying to do adventurous work they want to work, with people they trust and that continues to build a reputation in the industry,” Spector says. “People go, ‘I trust that guy’s work,’ so as an actor I’m trying to build that.” It’s that perpetual desire to find the projects that capture the feeling of the present, alongside his commitment to the characters, that makes him so compelling both onscreen and onstage. “You drill down so deeply into the specific that it becomes universal,” he explains. “You can’t try to make a broad, universal statement without truly understanding the life of your characters on a microscopic level. I think once you do that, and you do that well, that character will be relatable forever.”

Permission is out today. The seventh season of Homeland premieres on Sunday. All clothing by Ermenegildo Zegna Couture.