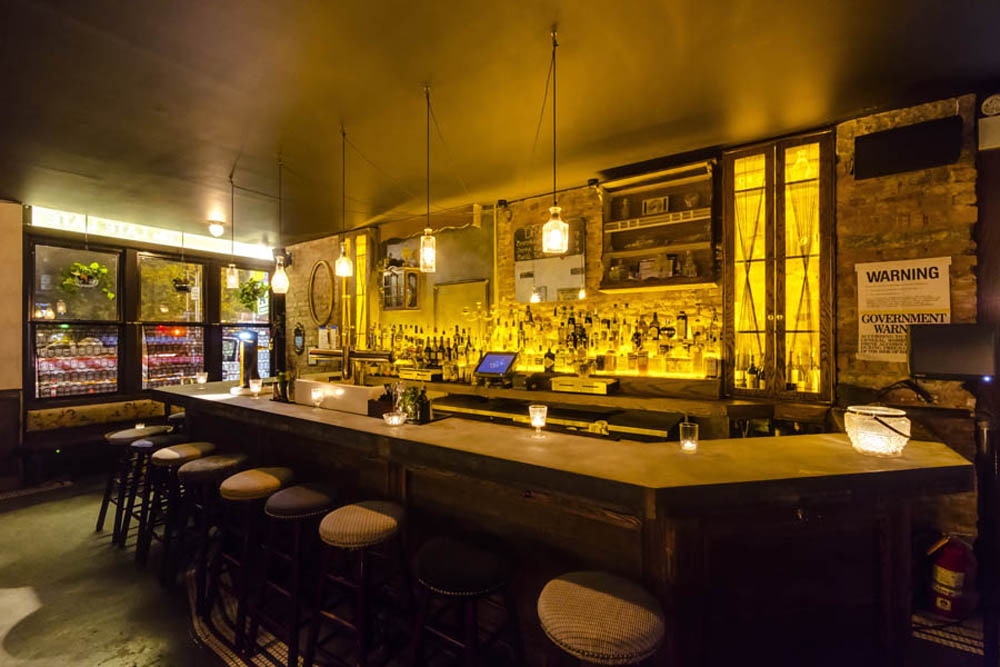 When you walk into Irish nightlife mogul James Morrissey’s latest bar, the Late Late Bar and Spirit Grocer on Houston Street in New York, you might think you are in a speakeasy, a lounge, or some other understated, dimly lit place where you could probably find an experimental cocktail and some mellow jams. You will, in fact, find creative cocktails—even ones containing Guinness—and carefully selected tunes. What you will not find are shamrocks.

The Late Late, named for the longest-running TV talk show in the world, is, technically, New York’s newest Irish bar, but you would never know it. Like its name suggests, the Late Late challenges the Irish norm: the once-controversial show challenged Catholic Ireland in the sixties, and Morrissey seeks to redefine America’s concept of the contemporary Irish bar.

On their own, the elements of the décor—concrete bar and floor, brickwork, antique furniture, and kitschy details (a Virgin Mary statue in the bathroom, a tiny black-and-white TV with a live feed to a bar in Ireland)—certainly do not scream, “Kiss me, I’m Irish!” in the way New Yorkers have gotten used to when they think of an Irish Pub. But together, these components are a re-envisioned version of a modern-yet-retro Irish space.

The street-level entrance of the Late Late leads to the “good room,” which is “similar to a room that you would have in a family home in Ireland in the Fifties or Sixties that you would only really have used when your extended relatives came over or for special occasions like Christmas,” explains Morrissey. “The aim was to get the space not to resemble a bar but a family home.” The downstairs space—which will transform from cocktail lounge to late-night spot around 11PM—has a more relaxed, somewhat clubbier vibe: the layout, with a bar against the wall and open space in the middle, is perfect for an early-morning dance party.

The drinks are also simultaneously Irish-yet-not-obviously-Irish: the upstairs bar boasts eight beers on tap that rotate seasonally, with the exception of Guinness, while the downstairs menu includes over fifty Irish whiskeys. But again, Morrissey wanted to incorporate even the most Irish of beers and alcohols into the menu seamlessly. Instead of massive pints of thick, dark beer, Guinness is incorporated in various mixed drinks (eight in total), including daiquiris and Manhattans, and served in crystal goblets with crème de menthe and a mint leaf—a favorite drink in Nigeria, it turns out. Barman Jack Crown has come up with eight equally as inventive whiskey cocktails for the downstairs bar.

The music also separates the Late Late from a stereotypical American Irish Pub. Instead of a playlist from the bartender’s iPod based on his current mood, the speakers ooze music from a database curated by Florence and the Machine guitarist (and one of the bar’s shareholders) Rob Ackroyd. Ackroyd has preselected tunes and separated them into sections based on time of day and time of year. A DJ can then choose from this selection. Be assured, there will be no set playlist on repeat. The music on the main floor is band-focused—everything from Sixties and Seventies rock to specific hours devoted to up-and-coming indie artists. If you’re lucky, you may even catch a glimpse of the latter, perhaps taking a turn on the decks or just hanging out. Downstairs, especially in the later hours, the music will range from UK garage to house to hip hop—“whatever is popular at the moment [in the UK],” explains Morrissey, since music trends in the UK tend to be six months to a year ahead of the US.

Given Morrissey’s extensive background in the entertainment industry—he started (and still runs) what is now the largest events company in Dublin when he was still at university—it should be no surprise to find some late late nights at the Late Late in the future.