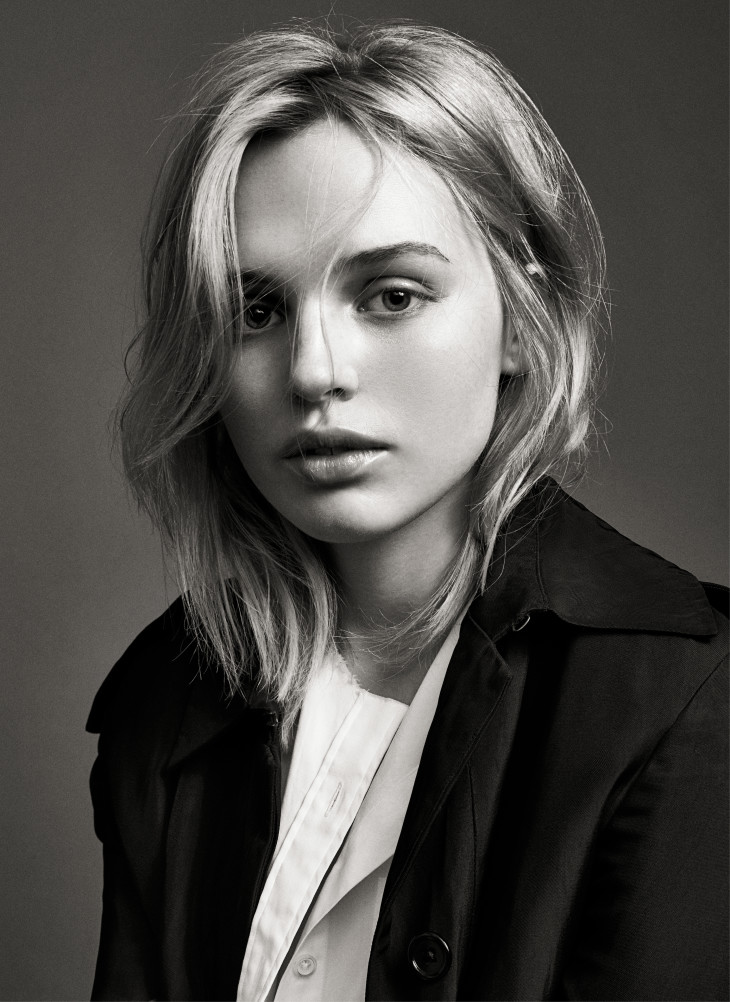 In the new film Assassination Nation, a small town is rocked by a hacking scandal that sets off a chain of precarious events for four high school girls, following Odessa Young’s Lily Colson and her group of friends (played by Suki Waterhouse, Hari Nef, and Abra) on a wild, hallucinatory ride as the women are forced to take ownership of their identities in a town that’s quick to dismiss them. It’s an ambitious film that marries camp and horror, timely tackles social inequalities, but, most impressively, serves as an acute take on the social media generation amid all of its cultish thrills and frills. In her most prominent role yet, the twenty-year-old Young brings a palpable energy to Lily. Only a few years ago, “it would have been something completely out of the question to be a lead in a movie,” according to Young, but here she reverberates across the screen. “I know now that I am capable of things that I didn’t know I was before.”

Assassination Nation starts off with a cheeky trigger warning to set the tone: The audience is warned of gratuitous violence, transphobia, and fragile male egos, among others, and the film never pulls its punches throughout. “As soon as people are actually forced to look at themselves, it’s uncomfortable,” Young says. The first half of the movie depicts the high school girls responding to the townspeople’s most sordid information being leaked on the internet with a blasé attitude, underscored by a tenuousness that slowly intensifies as the girls become targets of the hacks themselves. This earnest portrayal of adolescence is one of the reasons Young was first drawn to the role. “It’s very obvious from the get-go that Sam [Levinson] is a writer-director that loves his characters, which I find is shockingly so rare in movies about teenagers,” Young exclaims, recalling that she took the role when she was still eighteen. “They are so often written by people who hate teenagers and come into it with that pre-judgment and this kind of discrediting of the human spirit, where you objectify teenage culture as opposed to actually trying to understand it. And Sam is just one of those people who has the utmost admiration for human nature and human behaviors and just wants to understand it and unlock it and never condemn it.” As more lascivious texts and images are leaked, several students turn to Reddit-like forums to disperse the information and soon everyone’s secrets are out. The message becomes amplified by social channels housing video responses and comment sections which slowly control the narrative. When prominent men in the community begin to have their status challenged, the blame is shifted onto women, echoing a far too recognizable brand of misogyny. Lily is falsely singled out as the perpetrator of the hacks and it doesn’t take long for mobs of angry men to band together—it’s no coincidence their hometown is named Salem—and with the film in line with common critiques of our real-world social institutions, Young emphasizes that it’s an accurate reflection of the reality for young women. “This movie doesn’t do anything in halves, but it’s also not necessarily a movie with an agenda,” she explains. “I think the agenda is to entertain people, for one. I think the agenda is to share these very well-documented thoughts teenagers have. The things in this movie that are being said, this is not new shit. This is stuff that has been existing online for a long time, that makes many, many teenage girls go, ‘I’m sick of this, I’m sick of this, I’m sick of this.’”

Though Young laments this lack of compassion in the way people communicate these days, she freely offers it up herself. “I do recognize that our social conventions are very much now currently based, especially in this generation, on the way that social media works and how that has mainlined certain aspects of our personalities which may or may not be good.” Fortunately for her, her early start meant social media didn’t have as much of an influence on her own life. “I was working from a young age, so I spent a lot of time away from my peers. I think that that defined how I interact with them in real life and on social media.” Still, she says it’s her experiences on- and offscreen meeting an “amazing cross-section of humanity” that give her perspective. “I think it is in our nature to want to be significant and social media can make one feel very significant,” she concedes. “For whatever reason, our society has gone in a way where it is, for some, much more interesting to be supported and acknowledged for the conflicting nature that we have as opposed to the nurturing or empathetic.” Assassination Nation takes those ideas and conveys how easy it is to hide behind those voices, especially when they are expressed anonymously and driven by fear; it shows how swiftly a mob mentality can take over and how quickly we fall under that spell. “[The film] does something really interesting in that it actually mimics the extremes of social media in the way that, as a viewer, it will take you and handle you very gently for a second and say, You know, you are right and we’re going to show you how you’re right and everything that you’ve ever known and everything that you’ve ever felt angry about, we’re gonna validate that in this scene. And then four scenes later they’re going to say, And you’re the person who also did this and this and this and you suck and now we’re going to vilify you. As a viewer, you’re receiving that kind of judgment because this is a movie that wants to make you think.” Young has already given it some thought herself: “I think that it needs to be a bigger conversation about why this nation feels so righteous and self-righteous, what are the reasons for that, where does it come from, and why? Why is there such toxic aggression that comes through in the way that we conduct our conversations with each other?”

The willingness to ask those questions is why Young wanted to be a part of this project and her thoughtful and self-assured nature might be why she embodies Lily Colson with such apparent ease. Assassination Nation is the kind of movie that signals an actor’s approach to her career. As much as it’s a satirical, stylized thriller, it manages to collate many disparate pieces together to convey things about our culture we’re either blind to or defenseless against. It has the potential to resonate with an entire generation of people because it takes risks and executes with a resounding confidence, the very qualities you can expect to see more of from Odessa Young.

Assassination Nation is out now.