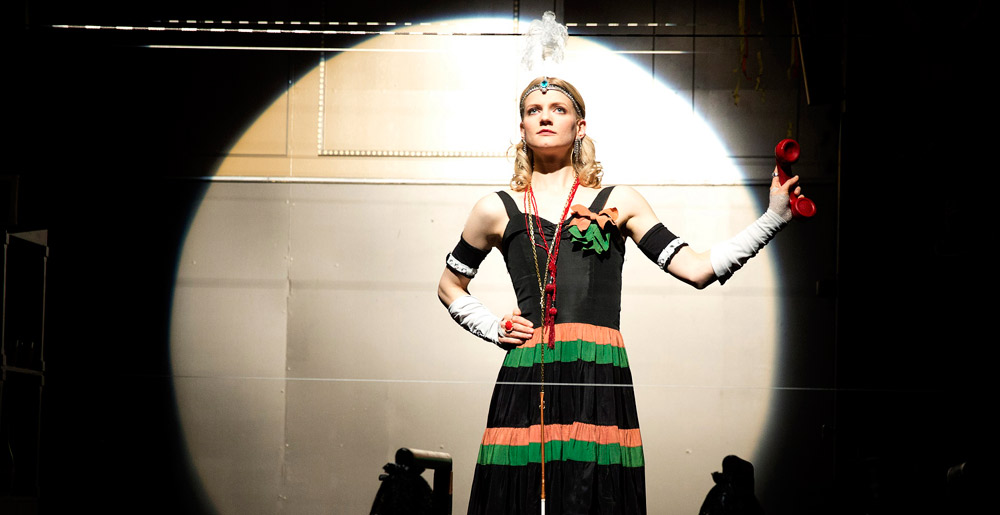 Somewhere on the dusty byways between the Vieux Carré and complete insanity lies the nameless, semi-European town (just as easily Prague or New Orleans) in which guru of the avant-garde Richard Foreman’s latest work takes place. Here, in this wild and shapeless city, a man slightly past his prime pursues an enchanting prostitute named Susie, in the course of which he is led to reflect on being, death, and sundry topics in between. (And yes, it turns out there are topics in between.)

That, ostensibly, is the action of a piece which concludes in just sixty-four minutes, but which at times feels mired in its third or fourth hour. There is nothing particularly linear—or even sensical—about how the action unfolds. In fact, “unfolds” doesn’t even seem the right term for the way in which the scenes melt, unravel, and often careen from one into the next. If there is a word for the purposeful meander of the madman who teeters on the brink between comprehending the universe and falling headlong into oblivion, then that is the word to describe the gait of this work as it makes its way across the evening.

Which, really, is just as it should be.

To be clear, you will not enjoy Old-Fashioned Prostitutes (A True Romance), per se. You will not emerge into the evening humming a tune, or admiring a newfound glow in the street lamps, or even really in a very good mood. And with good reason. The play is boring—objectively, almost scientifically boring. Flat, ritualized movement pervades the piece and makes pathos or even fun hard to come by. But try to drift off into bewildered admiration of the set (a saloon-cum-horror-show golf course designed by Foreman himself) and you will be jolted back into wakefulness by one of the flashbulbs, gunshots, or drum-blasts that stud the performance like hidden thumbtacks, pricking you when you least desire it.

But if Foreman’s set is somewhat violently baroque, the meaning of his gestures a shade beyond reclusive, the trail of his prose occasionally lost in the dark wood said to enshroud middle age, these catastrophes somehow marshal together to serve his artistic vision. In the play, we are trapped in the mind of Samuel (the aforementioned man of a certain age and admitted proxy for the author), a space cluttered with a lifetime of gaudy baubles as much as by things of real importance. Cramped and antic though it may be, the set delivers admirably on its errand of inducing mental claustrophobia. Just so, the disjointed and befuddling prose strikes a tone of cryptic reflection that leaves the viewer for the most part fuming in frustration, but that sometimes, in a shiver of startling clarity, achieves something like the poetry of Rilke or the crackling reminiscences of Krapp’s Last Tape. And it’s here that perhaps we should train our sights in trying to come to grips with of what is at first glance (and second, and probably third) an unhinged and meaningless night of spectacle.

To be sure, the show has no obvious thread—the fil rouge, as with Samuel’s, we suspect, has been lost somewhere along the way, and we are left to sort through an unstuck dreamscape of loneliness, frustration, and longing. But for all the bells and whistles, all the gaudy non sequiturs, there is something in Foreman’s offering here that is unusually bare and vulnerable. Samuel’s speeches (purled in a sonorous drawl out of Rocco Sisto’s tightly-drawn mouth) are crafted in the likeness of Life itself: wave upon fathomless wave of nonsense, broken by moments of fearsome perception. And his perception at times is truly fearsome. In Prostitutes, Foreman tries to share with us something at once too basic and entirely too grand to be got at by more conventional means. And if he has gone to great and but-fitfully-fruitful lengths to make sure his message comes through, still it’s true that the means he employs may be the best there are to bring undoubtedly his singular vision to life.

Solid performances from Sisto and a comically cooing Stephanie Hayes do much to help make it through the night. And Foreman himself provides us with instructions as to how to experience his work, in Samuel’s late-play declaration: “When I come upon some portion of my external environment that seems empty of meaning then I relax, and the meaning shall pour into that emptiness inside me.” Whether you can relax or not is another matter.