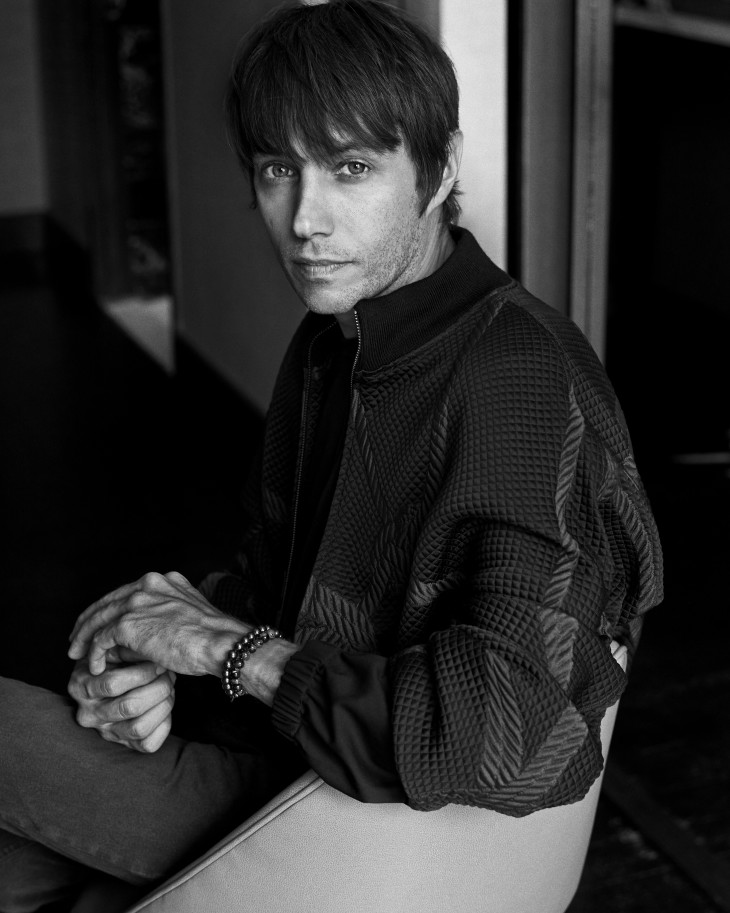 Jacket by 3.1 Phillip Lim. T-shirt by BLK DNM. Jeans and bracelet, Baker’s own.

It’s difficult to describe what it’s like to find yourself in the middle of Tangerine, Sean Baker’s new film about two trans sex workers in Los Angeles. Over the course of ninety minutes, we follow Alexandra (Mya Taylor) and Sin-Dee (Kitana Kiki Rodriguez) on a wild Christmas Eve goose chase after Sin-Dee’s cheating pimp-slash-boyfriend, with whom she’s looking to settle a score. Along the way, we’re privy to countless funny and touching moments with the characters who populate their world, from a closeted taxi driver to an aging Cherokee who doesn’t like his name to an outraged Armenian mother-in-law. At times, watching the film is like riding a great roller coaster. Not one with a sanitized Disney sheen, but one of those old wooden monsters that grabs you by the guts, makes you focus your senses, and just for a second makes you actually afraid, because you can see every timber and hear them squeak and you know that the ride you are on is real.

At other times it’s like sitting out beneath an open sky and reading Walt Whitman. Not the maudlin bard of “O Captain, My Captain,” but the unkempt and not-sorry-for-it vagabond of “Song of Myself,” his eyes turned not towards heaven, but towards the dirty, gorgeous, teeming streets where the true essence of life passes day in and day out, going by most eyes unnoticed. I’m talking about the Whitman who looks at America and sees not only the stainless monuments to the splendor of industry, but the suicide sprawled on the floor of the bedroom, the half-starved, the sunstruck, the everyday sorts eking out their living in whatever way they can. The seer who embraced above all what was commonest and lowest, knowing that at heart those things were anything but—that they were the real lifeblood of the society that he sought to portray.

Baker would probably laugh at being called a Whitman, but the clarity, energy, and unsparing pursuit of the authentic that marks his style makes the comparison a tempting one. His films are as bold as they are accessible, and as engaging as anything you’re likely to see.

Tangerine follows in the footsteps of many of Baker’s other projects, diving headfirst into an often-overlooked sector of American life. 2004’s Take Out (cowritten and codirected by Shih-Ching Tsou), tracked a day in the life of an illegal Chinese immigrant working as a delivery man in Manhattan. 2008’s Prince of Broadway focused on a Ghanaian hustler in New York’s wholesale fashion district who suddenly finds himself having to take care of a baby. And his penultimate feature, Starlet, observed the unexpected friendship between a porn actress played by Dree Hemingway and a reclusive older widow in the San Fernando Valley. It’s safe to say that Baker feels most at home on the fringes of worlds where few other filmmakers dare to tread, and a major part of his process involves really getting invested in whatever community or subculture will be the focus of his story.

The idea for Tangerine, he says, came from passing every day by a Donut Time near his home in Los Angeles and developing a curiosity about the people he saw there. So what did he do? “We went to this corner, this intersection of Santa Monica and Highland, and we basically just started introducing ourselves to people and telling them what we wanted to do, interviewing, just looking for those people who were enthusiastic about collaborating with us,” says Baker. That’s his standard M.O., and it’s one that takes intense commitment. To make Prince of Broadway, Baker and cowriter Darren Dean spent almost a year interviewing the real people—immigrants, street hustlers, store owners, cops—who populate the world of the film. With Tangerine, Baker says, he didn’t even know what the story was going to be about until about four months into the process. “You go in there and you don’t impose any sort of script or plot, just because it isn’t respectful. It isn’t responsible. You have to go and learn about the world before trying to figure out what the story is going to be.” It’s a process that Hollywood doesn’t have the time or the patience for, but it’s one that lends Baker’s films a uniquely realist feel and gives viewers a glimpse of communities that rarely appear in big-budget pictures.

That sense of authenticity is the key for Baker. Instant access to millions of candid homemade videos on YouTube has given today’s moviegoers an incredibly sensitive bullshit detector, and if something seems fake they will spot it immediately. “Audiences are savvy,” says Baker, “especially the type we’re looking for.” For that reason, much of his approach is designed to weed out the elements of irreality that come with telling a fictional story. For Tangerine, as with Prince of Broadway, he cast a number of local people alongside his traditional stable of actors. In fact the film’s stars, Mya Taylor and Kitana Kiki Rodriguez, are both trans women Baker met in the course of his research. Taylor, he says, “basically became our passport,” not only acting in the film but introducing him to other people from the area. It was from these people and their stories that Baker and cowriter Chris Bergoch drew their inspiration and eventually wound up finding their plot. A lot of the film’s most memorable moments even come from real stories the two were told.

This dedication to truth helps to ensure that the project is grounded in reality, and that, for Baker, is the future of cinema. “What excites me most right now are the hybrids,” he says of the fuzzy divide between fiction and nonfiction. “Those are what impress me the most, because I’m always looking at that blurred line and trying to figure out which side it falls on.” He lists people like Lars von Trier, Ulrich Seidel, Benny and Josh Safdie, and Ruben Östland as filmmakers whose work is pushing cinema in a direction that’s exciting and alive—and one that will make sure that the art form continues to thrive in the future. Baker’s an NYU film grad and could very well be making blockbusters right now (“This weekend I’m probably going to see the new…what’s the new…Oh yeah, Terminator,” he admits), but for him, exploring new and sometimes uncomfortable territory and telling the stories that feel real and immediate is what it’s all about. “Because if not, then cinema is dead, cinema is over, you know? Especially with TV taking over, if we don’t progress and if we don’t try to create new ways of storytelling in this medium, we’re very close to it dying.”

Maybe so, but Baker isn’t giving up. And with films like Tangerine jolting the form back to life like some juiced-up cinematic defibrillator, it’s hard to imagine that we’ll ever get tired of going to the movies.

Tangerine is out now from Magnolia Pictures.