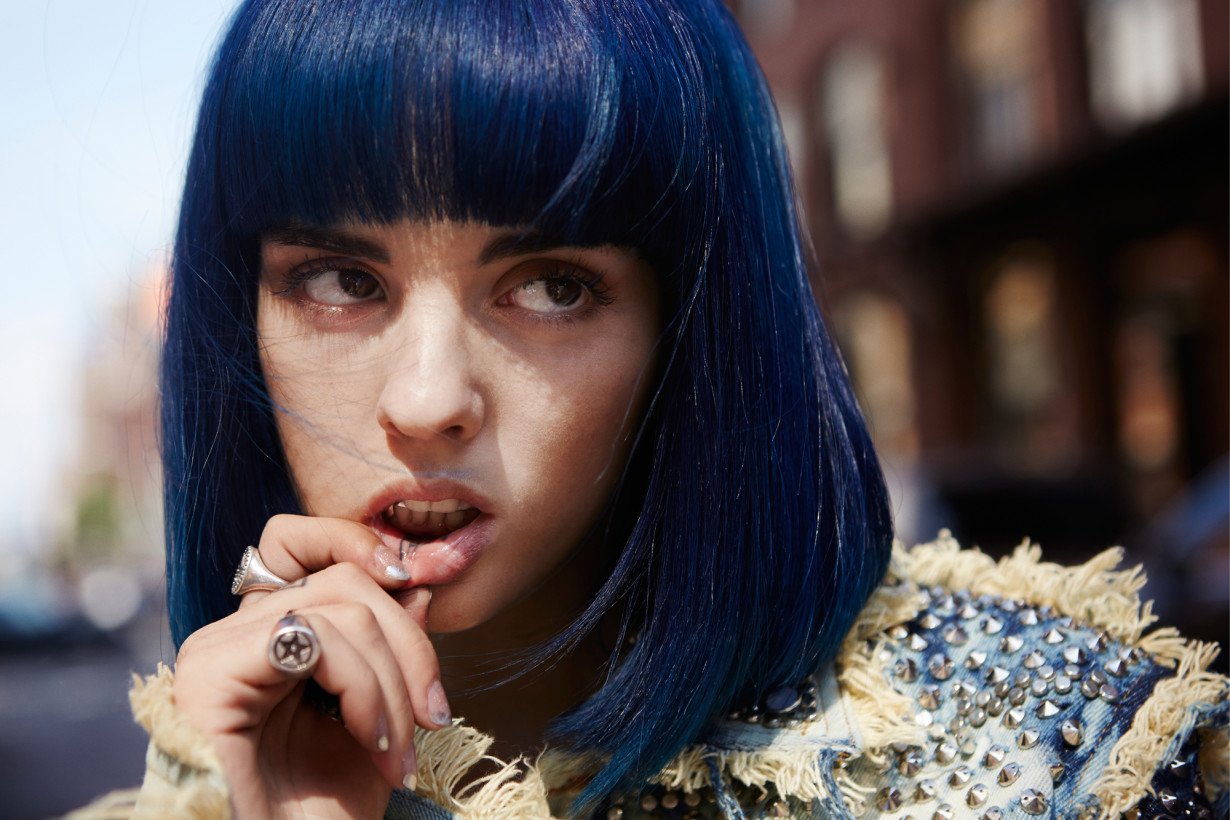 Denim jacket by Ashish. All jewelry, worn throughout, Abellan’s own.

“Everybody asks me, ‘Where do you live?’ But I don’t live anywhere,” explains Sita Abellan, the young Spanish model and DJ. The creative, like a lot of models (and some musicians), leads a transient life. “I just came back from Tokyo one week ago. I was in Milan, then Spain, then I came here for two months, then I went to Spain, then I went to LA—I have been to many places,” she laughs.

Unlike her fellow catwalkers, though, Abellan, who holds a degree in advertising and PR from Catholic University of the Sacred Heart in Milan, has a look—part fairytale pixie, part Marilyn Manson tribute, and recognizable whether her hair is bleached blond, electric blue in mini buns, or bobbed and Candyland pink—that is all her own. You hire her not because she molds into your vision, but because she’s inimitable. Left: T-shirt by Calvin Klein. Jeans by Helmut Lang, Spring 2004 from the David Casavant Archive.
Right: All clothing by Coach. Shoes by Forfex. And if you’re like Rihanna—who found Abellan herself and brought her on to star in her “Bitch Better Have My Money” video, you might just scout her on Instagram.

“I was shopping, I was on my free day, and my agent called me and said, ‘Oh, you have option for Rihanna’s video,’” recalls Abellan. “I was like, ‘What!’ I mean, maybe the agency sent a package of girls? But basically when I went to my agent, he claimed that she found me somehow.” “I need two holidays,” she grins. “But I can work harder and concentrate on music—I need to be fucking smart on that.”

This means DJing dark, minimal sets like her favorites from the Berghain in clubs in Tokyo, Milan, and Paris—and at the launch of our latest issue—but also exploring acting, styling, and creative direction. “I love fashion, but I don’t like fashion work,” says Abellan. “I realized I didn’t want to design because it is so difficult. So I think it’s easier, and, for me, cooler, to style. I really have fun doing it. I have fun dressing myself. And I want to work on that in the future.” All clothing by Coach.