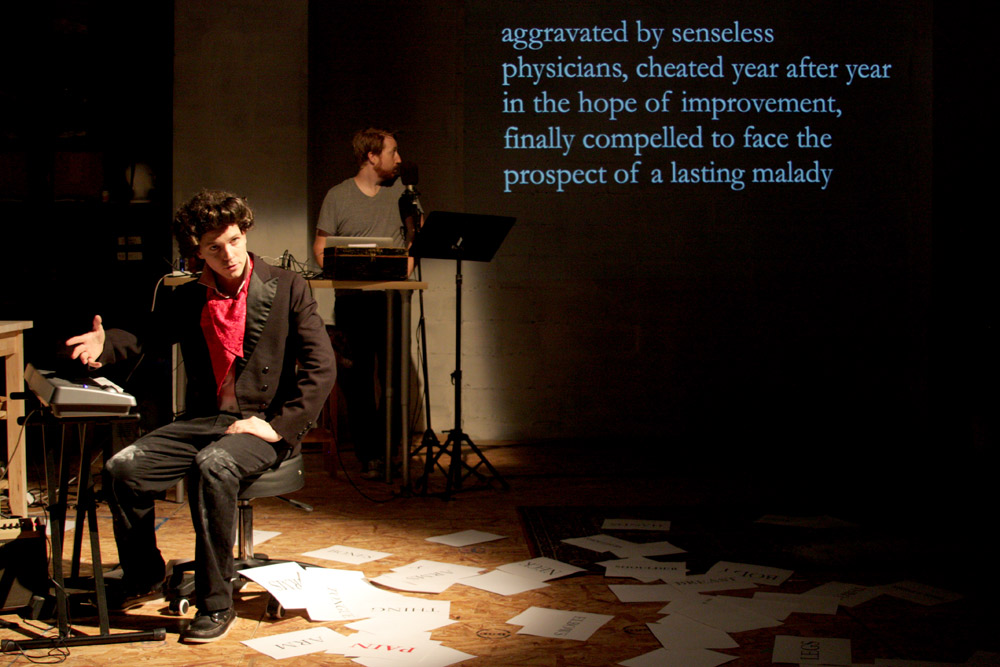 SONG OF A CONVALESCENT AYN RAND...

Michael Yates Crowley may be the only person who’s ever actually seen it. It was in 2007, and the playwright was at Disney World for a conference on life settlements (at the time, Crowley worked for a New York hedge fund as he got his start in playwriting). Relaxing in his room one night at the Grand Floridian, looking out his window at the private dinghies and enormous old-timey riverboats that sparkled in the Seven Seas Lagoon, he suddenly noticed a different kind of vessel making its way among them. “It was hard to see it at first, but right in the middle of all those boats—no lights on, basically running silent—was this barge completely covered in trash,” says Crowley. It was Disney’s nightly disposal run, weaving a way amongst its larger, more convivial kin on its way towards the dump. There it was, floating right in the middle of all the fun, and everyone was pretending it wasn’t there.

He recounts this apparition six years on as a sort of afterthought to another story, but there is the sense that the image has stuck with him. Indeed, Crowley and director Michael Rau have a better eye than most for the trash barges floating dark and unnoticed through the otherwise-winsomely-twinkling river of our American life. In shows like Righteous Money and The Ted Haggard Monologues, the pair have set out to dissect and explore the contradictions of modern America, to expose the beating heart that quakes beneath the brassy exterior, and to shine a hundred-watt bulb on that trash boat drifting dark through the center.

In their most recent piece, Song of a Convalescent Ayn Rand Giving Thanks to the Godhead (In the Lydian Mode), that pitchy bark stealing stealthily through our lives is pain. Sometimes hidden, sometimes violently pronounced, it provides the red thread that holds together a series of twenty-four scenelets presenting variations on their chosen theme. “We wanted to disrupt the way we’ve been making shows,” says Rau, and to do that they have pulled together a collection of sources and characters it’s safe to say have never shared a stage before. Taking as its starting point the vivid descriptions of agony found in Crowley’s high-school migraine diaries, the show is an enthralling and often bizarre excursion that sees commerce with Beethoven (speaking exclusively in German), a small-town drag performer singing lyrics from Emily Dickinson, an Objectivist scholar struggling with a crisis of faith, and even the Great Mind herself (Ayn Rand, for the happy uninitiated).

It’s a combination that in other hands could come off as an artificial muddle, but here there is a direct simplicity, an ease in telling, and a honesty in the presentation that allows these disparate elements to seem not only natural, but essential bedfellows. Rational egotism not your bag? It’s not Crowley’s and Rau’s either, but like it or not it’s a doctrine that continues to inform our society’s most fundamental beliefs. And the particular genius of these theatermakers is their ability to be incisive without forfeiting understanding—a sort of empathy with jagged edges that comprehends the humanity of its villains at the same time as it lays waste to their ideals. There is a sort of wisdom in their work that hums beneath every tossed-off joke and under the strains of the melodica that a long-dead Ayn Rand takes up towards the end (and plays with as much passion and verve, one imagines, as the melodica has ever been played). This, and a startling sense of fun, are what make Song of a Convalescent Ayn Rand such a rare theatrical beast—rarely heard of, less often seen, but fascinating to watch when it is.

Song of a Convalescent Ayn Rand Giving Thanks to the Godhead (In the Lydian Mode) will be presented April 27 at Joe’s Pub, New York. Photography by Rick Ngoc Ho.