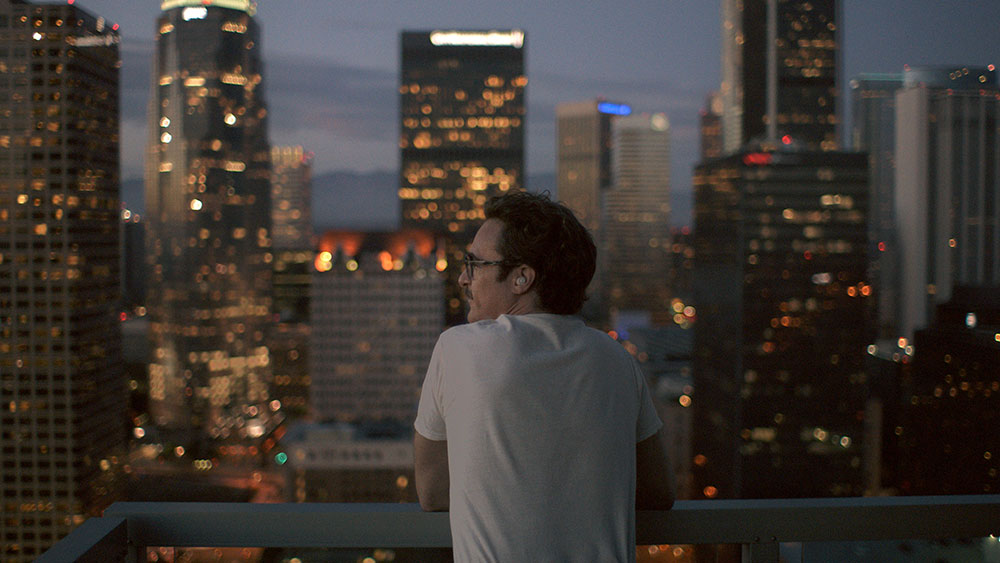 We’re not that far away from the imagined reality of Spike Jonze’s new film Her, which tells the story of a lonely man falling in love with his operating system. The Los Angeles of this not-so-distant future is safe and sunny, a gentle new world where everything is designed to make life easier and more comfortable, from a state-of-the-art public transportation system to wearable computers that browse the web and deliver email aurally via a tiny earpiece way sleeker than Google Glass. People know to eat their fruits and juice their vegetables, they work in cheerfully-colored spaces that look like playgrounds, and their gadgets help them organize their lives. KK Barrett’s production design, Casey Storm’s costumes, and Hoyte van Hoytema’s cinematography combine in a brilliantly-rendered future that looks good and should feel good (Jonze has mentioned that the film’s color palette was inspired by Jamba Juice), but where a sense of melancholy seeps through every pore. Stunning shots of futuristic skyscrapers, bathed in the glow of dusk or shimmering at night, capture the excitement of the city’s social swirl, while hinting at the lonely lives tucked behind the blinking lights.

Theodore Twombly (Joaquin Phoenix) is a perceptive and sensitive man who works as a ghostwriter at BeautifulHandwrittenLetters.com composing love letters for others. Underneath it all and known only to one friend, Theodore is nursing a broken heart, pushing away from reality by delaying the signing of his divorce papers. His soon-to-be-ex wife Catherine (Rooney Mara) and he have grown apart, but still care for one another. Enter Samantha (Scarlett Johansson), a new sentient operating system (OS1) equipped with a breathy, sensual voice who is not only tailored to help Theodore with his emails and time management, but who also suits his temperament and taste in women. She’s funny, feisty, and curious about Theodore’s world. A relationship soon develops between them.

What makes this digital romance believable is that, a few creative adjustments aside, theirs is like any other romantic relationship. It soars toward the honeymoon stage, reaches the plateau of routine, and then forks when the two begin to grow apart. Theodore has been there before. Samantha loves him, but that doesn’t prevent her from outgrowing him. It would be all too easy and clichéd if the story of Her was about Samantha’s longing to be mortal. She flirts with the idea of a human consciousness (she confesses to Theodore: “You helped me discover my ability to want”), but, as she continues to evolve, she doesn’t envy humanity. It’s not all it’s cracked up to be. Humans can’t read or calculate as fast as she can, and they can’t communicate simultaneously with thousands of consciousnesses beyond space and words. We count ourselves lucky if we get one relationship right.

Perhaps the reason why Jonze’s tech-savvy tale of love feels so timely and so right has little to do with its creative incorporation of technology in the plot. Or rather, that’s not the whole story. Jonze’s film cuts deep and gets at our frustrated desire to connect with others, our aching search for intimacy. Technology is supposed to bring us closer, and in many ways it has. But in a world that constantly boasts new heights of access and connectivity, the failures to connect are that much harder on the heart.

With echoes of the progressive romantic comedy in the vein of Punch-Drunk Love and Eternal Sunshine of the Spotless Mind, Her is also a grown-up meditation about something more durable than romantic love—companionship and friendship. Jonze, who has made a name for himself directing smart, genre-bending metafilms like Being John Malkovich and Adaptation based on Charlie Kaufman’s screenplays, has written and directed perhaps his most mature and powerful work yet. While Her is his most accessible film to date, the feat of writing is all the more impressive for its finesse and subtlety. Eschewing hackneyed plots, the movie handles myriad human emotions with utmost care and attention. Like Theodore, who adds in a letter for one of his clients a small note about a beloved’s “crooked little tooth,” so Jonze too has an eye for the subtlest of details and the most delicate flutter of feelings. Be it the goofy joy of spooning lovers or the lingering affection and jealousy of former spouses, Jonze captures fleeting nanoseconds of misconnections and closeness.