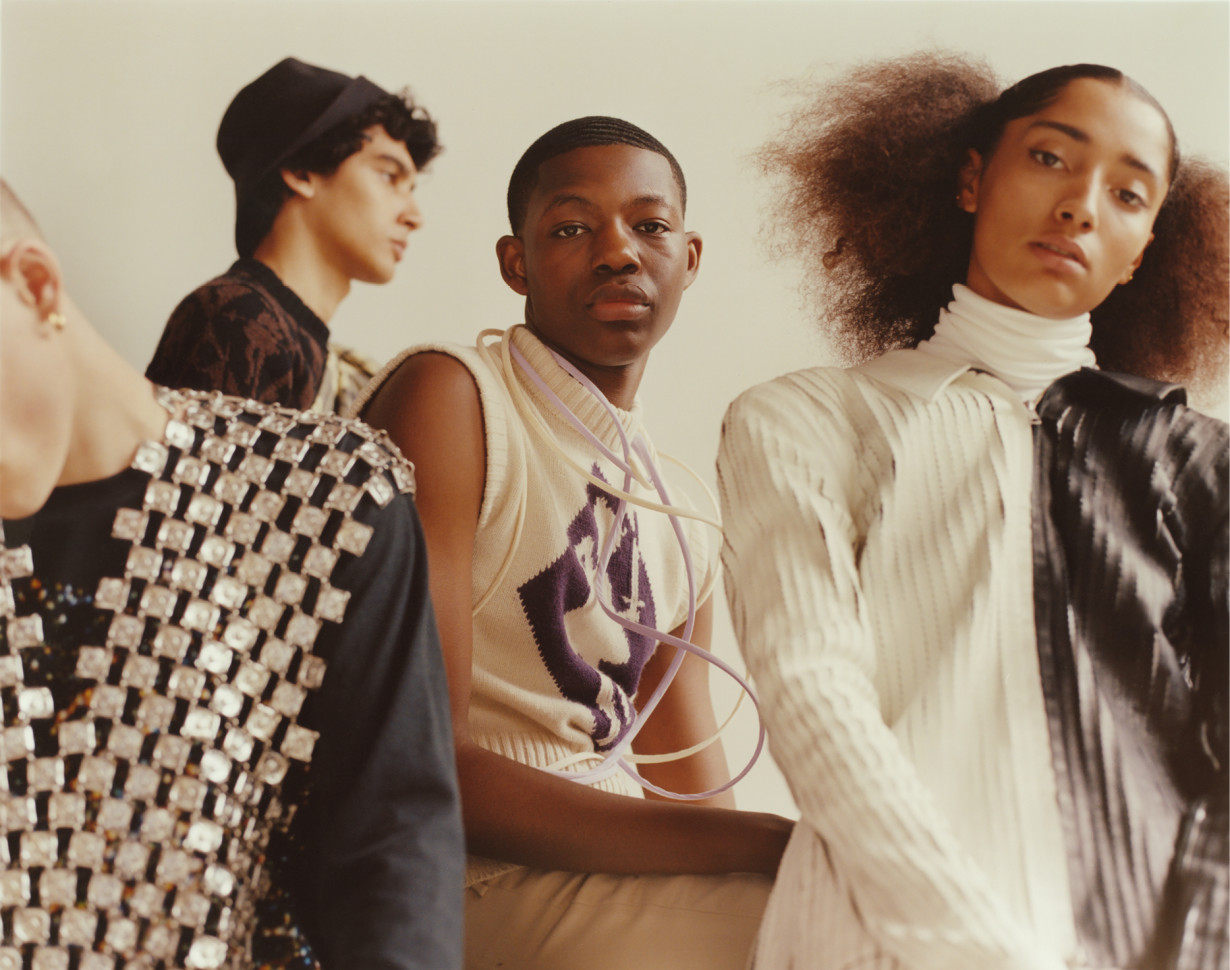 All clothing throughout by Stefan Cooke.

“One of the things we do which is maybe a bit silly is get too worried about the quality of stuff and it drives us a bit mad.” The thought gives pause to Jake Burt, one half of the design duo Stefan Cooke along with his partner of the same name as the label, who finds himself navigating the growth of their menswear brand while designing successively applauded collections. “But it’s good,” he continues. “We just get so caught up in things looking a certain way, which is good because then when it comes to production, it all is high level.” That much is undisputed, with admirers drawn to their intricately crafted clothing that relies on deft technique and results in an indefinable elegance. In its four seasons, Stefan Cooke has found growth in both critical acclaim and sales, but it’s still a small company. For Burt, that means needing to understand the business of fashion as well as the art. “The designing part is really easy,” he explains. “Stef and I have been together in a relationship for seven-and-a-half years and throughout that whole time we were just learning to design together, so we find the designing part of it kind of second nature.” Burt and Cooke both completed MAs at Central Saint Martins before launching their label in 2017 and, aside from groups of interns who work on garments (“For autumn the interns we had were all students; they became our best friends within two weeks,” Burt adds), they’re operating the brand on their own, which presents a new set of challenges. “The problem of me and Stefan being the only ones who are, let’s say, completely responsible,” he elaborates, “is we are spending our entire life doing production or PR or just really tedious business things like accounts and financing.”

Nevertheless, the brand is succeeding because of that uncompromising quality Burt and Cooke are dedicated to creating, but also because they’ve always been accustomed to working with finite resources. “I definitely think having limitations is really good, especially for me and Stefan,” he explains. “Neither of us is from wealthy backgrounds at all. We both worked solidly throughout the MA to pay for it and then we worked our first season, so we’re used to having to make a thing out of nothing.” Still, Burt is quick to deflect some of the credit for their quick rise to the London fashion communities formed first at Saint Martins and then the incubator Fashion East (which presented their first three shows) who have provided support. “We’re part of a family of designers in London,” he says. “We have Charlotte Knowles, people who we all meet for drinks constantly and we always end up discussing the fashion business and coming up with ideas together. Then also what’s really nice is we have people like Craig Green who we’ve known for years who can give some good advice and pointers.” Despite the time-consuming tasks that come with developing a brand, their creations have never suffered. Part of that is because Burt and Cooke rely on their instincts to design, an inclination that has become more important since they presented their Spring 2020 collection, which was the first show they produced independently. “For me and Stefan, there’s never an idea right in the beginning,” Burt explains. “We end up just doing loads of really instinctive designing and decision making, then at the end, there’s often a really clear thread that we didn’t realize and it takes for us to finish the collection or the project to actually realize that we did have a point.”

For the Fall 2019 collection titled ‘Joan,’ the theme had been in their consciousness, but only revealed itself after the fact. “The other thing that happens between me and Stefan is that we forget to title things because we’re so used to just communicating things,” Burt says. “I didn’t realize until afterward, but when we were styling the collection, Stefan was like, ‘Oh it feels like Joan of Arc.’ He was trying stuff on and he was like, ‘I feel like Joan of Arc,’ and I was like, ‘Yes! That’s absolutely perfect for this show, that’s the point.’ So two days before the show we wrote a press release for it, kind of about Joan of Arc.” The inspiration for Stefan Cooke instead often comes from other clothing. “We spent our entire relationship just going around charity shops finding and thrifting clothes,” Burt says, offering as an example a point of inspiration for Fall 2019. “One of the things we found—it’s such a common thing—you know on Chelsea boots there is an elasticated panel on the side that allows your foot to slip in.” The pair frequently take those types of minor cues and expand them as far as they can. From a distance, form-fitting pants and jackets in the collection look striped but are patiently crafted from stitching thin strips of leather together to replicate the effect of those Chelsea boots. “I think some designers like to spend loads of time finding really obscure images and references and they go through such a mission to get it to a real piece of clothing,” Burt offers. “But quite often you can just start with a real existing piece of clothing that you love and see if you can change one thing, like add a giant crisscross slash across it, and instead of spending the time that another designer would spend coming up with this philosophical reasoning for why they’ve done something, you can actually just spend that time just doing that simple idea really, really well.” This philosophy comes back to the quality of the clothes at Stefan Cooke, which requires a high degree of precision and skill to execute in a wearable way. “I guess the ideas we like draw from the utter wealth of secondhand clothes there are in the world and how many things have already been designed,” Burt says. “It’s so crazy when you think of the ocean of ideas that have already been realized in fashion.” It’s something young designers often forget about, instead coasting on haughty symbolism to grow their brand, but not Burt or Cooke. They’re driven by their instincts and their commitment to a perfectly finished garment, regardless of the limitations of a small label. They’ve established themselves as genuine designers, exploring possibilities in constructing garments and rethinking how existing ideas can be made anew.