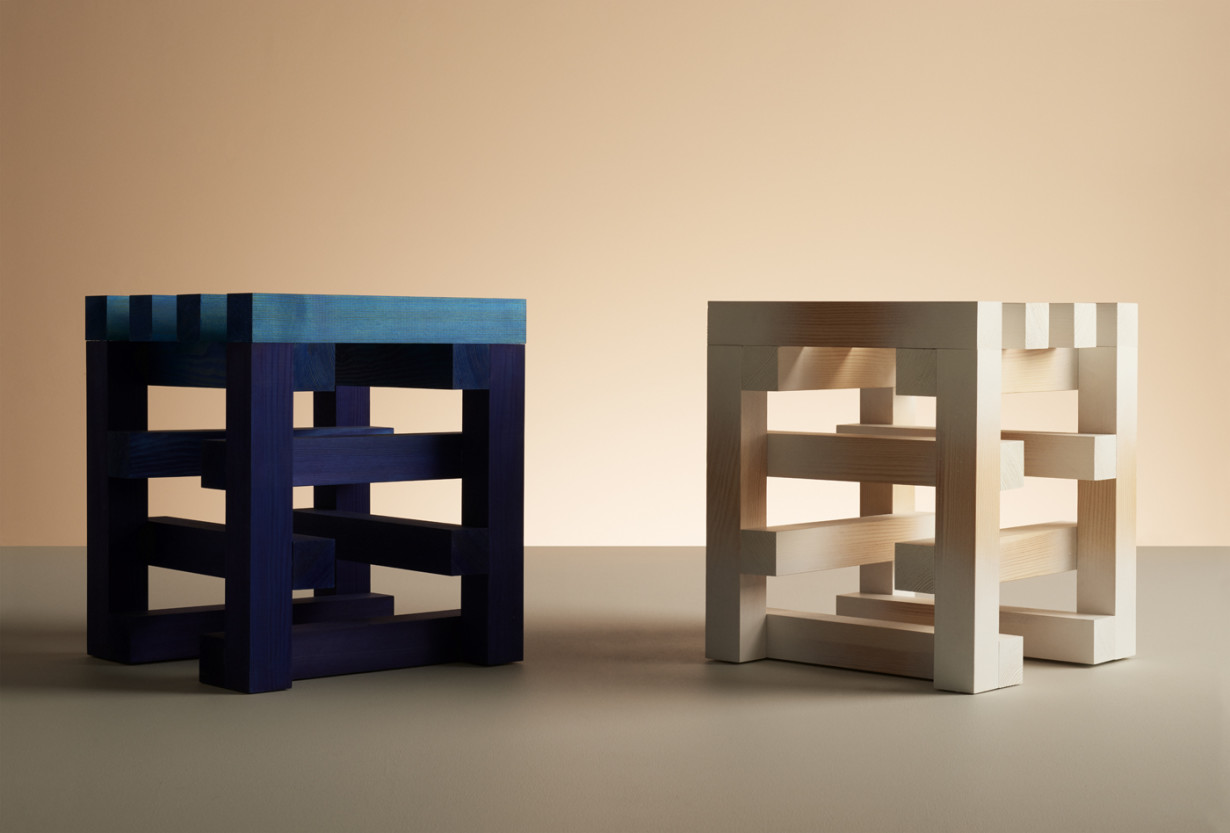 Studio E.O founder Erik Olovsson is systematically unhinged. At his Stockholm studio, he oversteps limitations—of time, material, or convention—by defining pathways around them. He may, for example, limit the creative process to a single day, as he did with his Afternoon Sculptures crafted from scraps of brightly colored wood, or create new objects almost solely out of the leftovers of old ones, as he did with his ST∞L series. And in more extreme cases, he may transition to an entirely new medium, one where the boundaries are undefined because they’re unknown. Nontraditional as it may be, his methodology shines through, and the end product directly reflects the system out of which it’s born. When the ST∞L series debuted at Milan Design Week this year, for example, the meditative quality behind its construction stood out: each stool was clearly formed of the excess of the stool that came before it. Viewed as a singular object, a given stool may be wildly untraditional—a single misshapen board or a set of orange rods stacked atop one another—but viewed within the series, its roots take shape.

His approach in mind, it’s unsurprising to learn that Olovsson’s heritage is equal parts spiritual and scientific, his parents being teachers of meditation and his grandfather having been a scientist. He seems to have landed squarely in the middle, pursuing creative arts by way of a deep education: fine art and photography at Konstskolan, then graphic design at Berghs School of Communication, then back to Konstskolan for a master’s in storytelling. While his notoriety has grown largely as a result of his three-dimensional work, he would argue that his experience in other forms still shapes his approach. “In some projects, like the stools, I focus on the surface almost like two-dimensional images in a similar way to how I work in graphic design,” he explains. Defining this framework is an investment he makes at the beginning of each project, but from there, he moves quickly. Otherwise, he says, “I lose focus.” The ST∞L project grew out of the Afternoon Sculptures project, during which Olovsson made a new piece of art each day: “A nice way to make something with my hands every day,” he says, “without having a concept of what I was really doing.” In its place, ST∞L itself is endless, with no defined result, even if the individual pieces within it are, at any given point, complete. “I see the project as an experimental platform with a timeline where I can look back to see the evolution of the stools,” he says. “I want this to be an ongoing project where the stools could be in any shape or color. So the stools I’ve made so far are finished, but the project as a whole will hopefully never be finished.”

Recently, Olovsson’s output has reflected a fixation on a new type of conflict, that of geometric and organic forms. To create his Indefinite Vases, he takes blown glass (an indefinite, melting material) and lays it atop a defined geometric form (say, a marble pyramid), then allows gravity to give the glass its final shape. The end result is somewhat mesmerizing, as the glass itself seems almost in motion. But of course, it’s not: you could fill it with water and use it as a vase, and, in doing so, transform it from decorative to functional. “I’ve always been working with these kinds of essential geometric forms, both in photography and graphic design,” Olovsson explains. “I now translate this way of working into my new works.”

For Olovsson, this type of experimentation and pursuit into the unknown is a primary source of motivation, a process that serves almost to refresh the appeal of the field. “When you’re moving into a new one,” he says, “you can approach it with new energy. Not knowing all the limitations, you can create interesting results.”