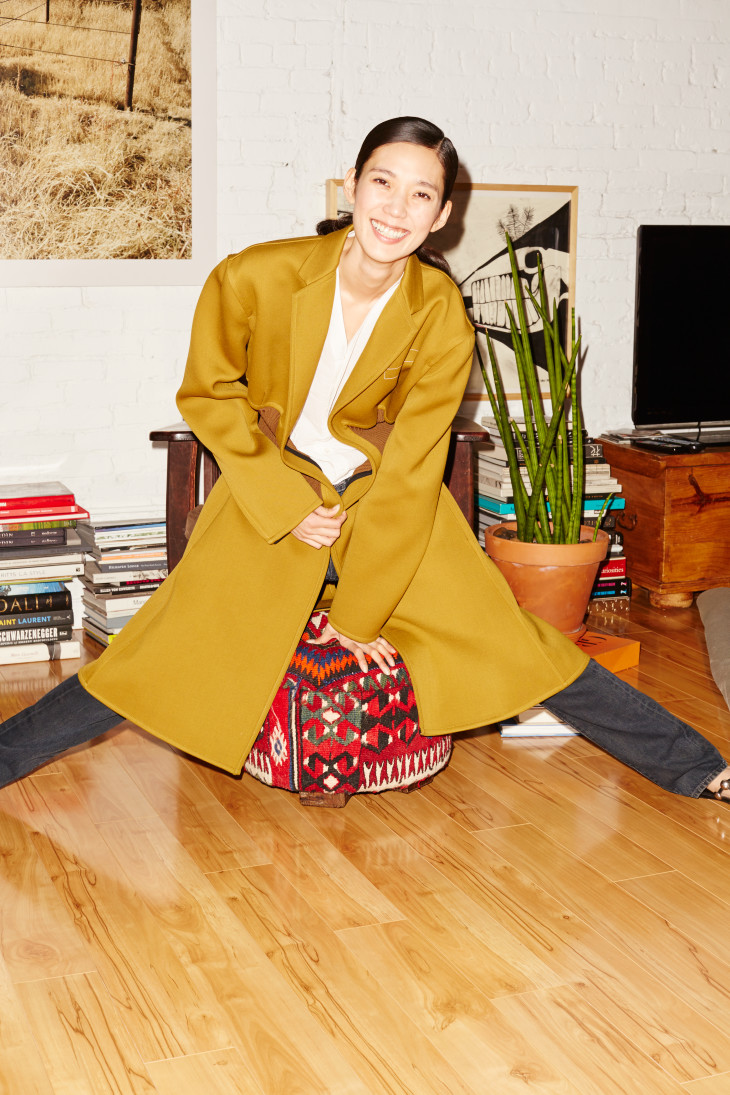 There are a million ways to deal with growing up on the outside. Some kids bleach their hair, rip their clothes, and otherwise celebrate and enunciate their self-declared freak status; Raf Simons listened to Kraftwerk, Kurt Cobain took up guitar, and Patti Smith stole from a stranger and hopped on a bus to New York. Tao Okamoto, the face of so many high-profile campaigns—and now, in a big way, a burgeoning actress—decided to become a model.

“I was born in the suburbs—it’s called Chiba,” explains the thirty-year-old Japanese beauty over the phone. “I was going to the local public school till junior high school, and I was very different from other kids, because I was very tall for a Japanese girl. One day, I was wondering if maybe I should be a model, [because] models should be tall.”

As hard as it may be to imagine, Okamoto says that she was self-conscious about her appearance while growing up. “I was trying to find a way to appreciate myself, how I am and how I looked,” she recalls. “Till that point, I always thought I was an ugly creature because everybody really treated me like that.” Okamoto was just fourteen at the time, and with a walk down Tokyo’s most famous scouting street and some encouragement from her parents, she dove into a career—sending photos to a strong Tokyo agency that signed her a few months later—that has since taken her from Tokyo to Paris at age twenty, to New York at twenty-three, into international fame, and, in the last three years, quite inadvertently, into another realm entirely.

Okamoto says that she never really received a great response from the Japanese clients, so she left for Paris—still looking for some acceptance from home, still looking in from the outside—and broke through almost immediately. “I was doing shows and magazine work consistently, but nothing was really satisfying me,” she explains. “I realized the reason why I wasn’t very happy—I was still trying to impress the Japanese people who rejected me at first. I thought, ‘Why am I doing this?’ I realized it’s not very healthy, but somehow, rejection always gives me the energy and motivation to be better.”

Next came a move to New York in 2009, which changed everything. Phillip Lim styled an entire show after Okamoto’s distinct new haircut—“I thought he was joking when he said I was going to be the theme of the show,” says Okamoto, “then on the day of the show I saw the wigs”—and she went on to book Chanel, Louis Vuitton, Yves Saint Laurent, and multiple American Vogue editorials, not to mention campaigns with Mario Testino for Dolce & Gabbana, Mario Sorrenti for Kenzo, and more. Now, Okamoto is taking charge of a new creative space. Three years ago, with no experience and, admittedly, no previous interest in acting, she took a part in James Mangold’s The Wolverine, opposite Hugh Jackman. “I hated that idea that [modeling] was just a step to becoming an actress,” she says. “I was kind of against that, but then I heard that it was for Hugh Jackman’s love interest. And I decided to do it.”

Okamoto memorized the lines for several scenes and got the part. It turned out, experienced or not, she was a natural. “[Mangold] really taught me how to act,” explains Okamoto. “It wasn’t like I was doing something [inauthentic]. It was just me, putting on some layers with the director’s magic. Since then, I just fell in love with acting and I just wanted to do more.”

From that moment on, Okamoto has devoted herself to the craft. She’s put her modeling career on hold, citing a desire to “put myself in a tougher situation to figure out what I want to do next,“ and she’s been taking acting classes, as well as working with a dialect coach. “If they want me to speak like myself, I can still do it,” says Okamoto. “If they want me to speak more American or English or Australian, whatever that may be, I should respond to that request.”

She says she looks to her youth of feeling on the outskirts, and her most personal connections, when trying to tap into the intimate emotions of her characters. “I think right now, a lot of emotions are coming from my childhood and my relationship with my family,” she reflects. “It makes me very vulnerable somehow, and it’s funny, but all those emotions allow me to act.” Since The Wolverine, Okamoto has played an elusive assistant to Hannibal Lector’s aunt on NBC’s Hannibal; a tech-savvy detective hunting down a murderer in the Japanese miniseries Chi no Wadachi; and Betty, the wife of a lawyer in the dystopian Amazon drama The Man in the High Castle; and also starred in Crossroads, a Japanese film about a local volunteer organization, out later this year. She says she doesn’t have specific roles she’d like to pursue, but that she would like to star in a picture that can bring in one of her other passions. “I studied classical music,” she explains, “and I’d like to do something with music—that’s a dream.”

In just a short time, she has already met with impressive success in Hollywood, but she still finds herself turning to home. “I wish I could do more in Japan,” she says. “It’s very difficult to find a balance of where I can be and for how long. It’s always a gamble to choose work to do.” If she can do both Japanese pictures and Hollywood films, she says, she will.

Up next is probably her most hotly anticipated film of all. Okamoto will play Mercy Graves, the assistant and bodyguard of Jesse Eisenberg’s Lex Luthor in the mega-blockbuster Batman v Superman: Dawn of Justice (also starring Ben Affleck and Henry Cavill in the title roles), a part she secured after director Zack Snyder watched her in The Wolverine. “It was really great,” she exclaims. “The character didn’t need to be Asian or Japanese. I’m very happy about that. Once you’re an actor, you can become someone else.”

In the meantime, Okamoto is continuing to hone her craft and looking to expand her range. She’s taking piano, singing, and, sometimes, swordfighting and tap lessons, and soon she’ll begin working on two new features unlike any she’s been involved with thus far. “I cannot mention the names of the projects, but I’ve been working on two independent movies which are very different from what I’ve done,” she reveals. “That’s something I’ve always been a fan of watching as an audience, rather than superhero films. [They’re] very personal and dark, and I hope a lot of people can really have empathy for these characters. It’s difficult, because I’m tall and I’m an ex-model and I’m Asian. It’s very easy to do stereotyped typecasting with the big superhero movies. It’s going to be a great balance if I can do the independent movies. You have to appreciate every day, every experience.”

Batman v Superman is out March 25.