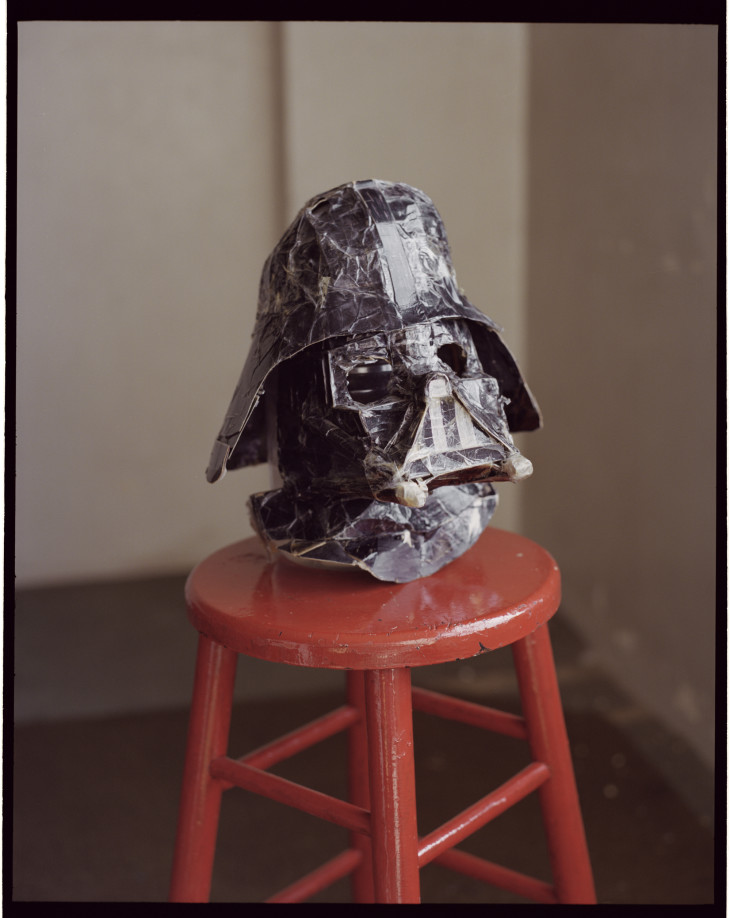 All photographs courtesy of the artist.

The commute between Manhattan and Brooklyn begins on the southeast corner of the island, at a crossroad that divides the Lower East Side in half. If you peer over the south side of the Williamsburg Bridge, public housing ominously juts out of the landscape, tucked away on the edge of the East River. Without reason, you’d never pass through, as the area offers little and leads, largely, to nowhere.

For fifteen years, a window on the sixteenth floor served as the sole vantage point for the Angulos, seven siblings whose father prohibited any exploration of the outside world save for a handful of closely monitored trips. Their lives, instead, were confined to a series of small rooms and the television screens within them, where the brothers watched, rewatched, and reenacted thousands upon thousands of films. And then, one day, fifteen-year-old Mukunda simply walked out the front door, and shortly thereafter, his siblings began to follow. Since then, their journey and subsequent growth has gone from a life defined by secrecy to one celebrated globally, all due to a chance encounter in 2010 with Crystal Moselle, then just a graduate student at New York’s School of Visual Arts. Struck by their presence—six brothers in Ray-Bans, hair to their waists—she approached them without introduction and spent the next several years, alongside New York–based photographer Dan Martensen, documenting their lives.

The outcome is The Wolfpack, out this fall on DVD, an acclaimed look at their home, upbringing, seclusion, and the immense creativity born of the combination. The æsthetic is raw, shot largely in the close quarters of the apartment, and details a family structure that veers wildly between a remarkable closeness and a detached layer of mystery. Darkness lingers somewhere beneath the surface—their father, who held the sole key to the apartment, struggles with alcoholism—but the miracle of the film is subtle, almost Boyhood-esque. These are the experiences of a newborn—a first visit to a park, a first conversation with a stranger—through the eyes of a teenager, and the quiet thrill of each isn’t lessened by the latter’s age and consciousness. Moselle masterfully weaves between the internal and external, showcasing to the viewer the means by which the boys coped with their seclusion and, in turn, how that coping mechanism (the films of Quentin Tarantino, Christopher Nolan, Martin Scorsese, and more) shaped their understanding of the external world. This is the inverse of a traditional upbringing, where the magic we see in films is measured by its distance from our day-to-day experiences; the brothers constantly interpolate film characters and their props into the real world in the way we disrupt the unreality of a film by viewing it, naturally, through the lens of everyday life.

For Martensen, this artistry has become a subject all its own, and he is releasing a book of photographs of the brothers and their props, which will be previewed in an exhibition at Deitch Projects opening tomorrow. “The artwork is intensely inspiring,” he says of their creations, “and, as with most great folk art, it tells a lot about the boys themselves. There is a meticulous attention to detail. Even the weapons vary ever so slightly,” Martensen says. “To my naked eye at first, I thought when I saw a knife or a gun they had made, ‘Oh, that’s a knife, or that’s a pistol,’ but they’re not. Mukunda would say things to me like, ‘That is the knife from Halloween II; the one from the original Halloween is a bit skinnier, like this.’ “Things like this tell you a lot about them,” Martensen continues, “and it’s amazing to see they really believe in the soul of the characters they portray in their costumes and the props that they carry.” So much so, we see throughout the film, that they carry these souls with them through the streets of New York, exploring in full Reservoir Dogs attire one day and as Batman the next, and still returning home to create more—“boxes and boxes of handmade costumes,” says Martensen, “all catalogued in the closets of the apartment.”

The ease and excitement with which they approach their exploration is, in the succinct words of Martensen, “weird.” He explains, “None of them would ever have chosen to be confined to a small space their whole childhoods, but the beautiful young men that have emerged are a real testament to the human spirit and how imagination and love can expand beyond any walls or boundaries.” Be it Moselle’s approach or simply the subject at hand, the story is ultimately a positive one, and in its final scenes, when the boys leave the city and explore the fields and forests outside it for the first time, you’re left with the understanding that they’re only on the beginning of their journey but that, in the end, they’ll be better for it. “The boys had never swam in a river before, never run around in the fields, never climbed trees,” says Martensen. “I wanted to be there for that. I wanted to be a part of everything they did, because they did everything with vigor, with excitement. It is infectious, and it made me feel like a little kid again.” All photographs courtesy of the artist.