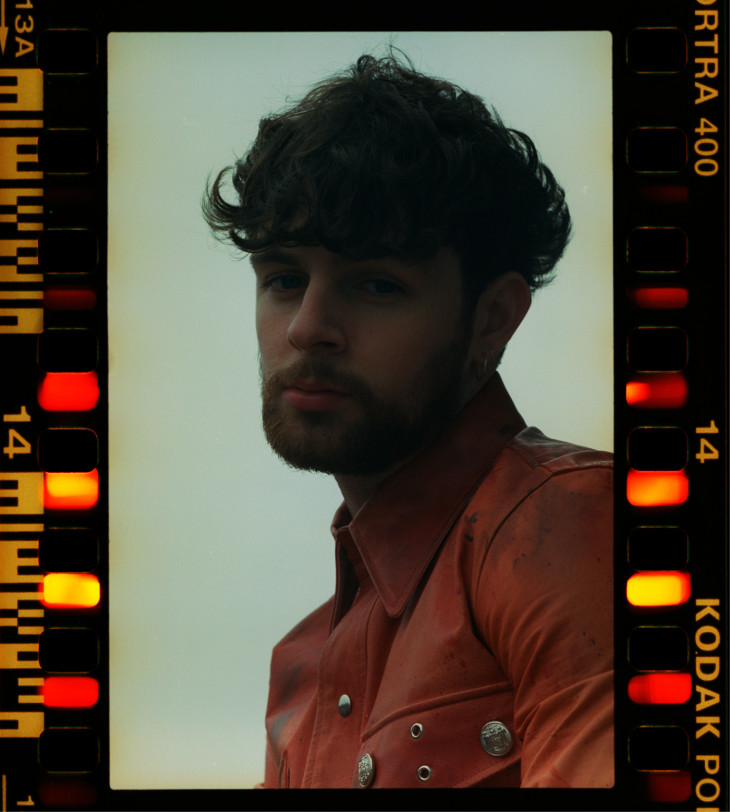 Jacket by CALVIN KLEIN 205W39NYC. All jewelry throughout, talent’s own.

Tom Grennan says he’s “just an ordinary guy from Bedford,” or, as he elaborates, “just exactly like Dave from down the road. He gets up at ten in the morning and brushes his teeth.” And it’s true—Grennan’s origin story sounds like it could be a Netflix series on the climb of a down-to-earth, working-class British pop star. He was raised in Bedford; had a promising football career, playing for a number of clubs including Luton Town, Northampton Town, and Aston Villa; and has a CV that includes Costa Coffee and working at a building site with his dad. His introduction to music also feels extremely relatable, as he discovered his talent at seventeen while “properly drunk,” singing karaoke at a house party.

Grennan had never sung before that moment but, after impressing a few of his friends, decided to keep at it. “Then I moved to London, studied acting, and taught myself to play guitar,” he says. “I tried to write songs, went gigging for around two years, and got signed.” His laid-back recap of his first few years in music very clearly underplays the determination and persistence required to create an artist from scratch with zero musical background. “Oh, actually my granddad in Ireland used to play the accordion,” he rebuts. Grennan attributes this perseverance to a viscerally eye-opening experience. “Something happened to me where I was put in hospital,” he remembers. “I was attacked by a group of strangers, punched in the face, and had my jaw broken.” Left: Jacket by Louis Vuitton. Shirt and trousers by Raf Simons. Shoes, worn throughout, talent’s own.
Right: All clothing by CALVIN KLEIN 205W39NYC.

While karaoke was the beginning, that attack, he says, is when the light-bulb moment happened. “I thought, You know what, life’s too short to not do what you want to do, what you’re made to do,” he says. “I felt like music was my calling and I wasn’t letting anything get in the way of that.” And he hasn’t. In his short career so far, Grennan has been a guest vocalist on Chase & Status’s 2017 track “When It All Goes Wrong” and released a début EP called Something in the Water and a number of singles, one of which, “Found What I’ve Been Looking For,” was included in the FIFA 18 soundtrack. His sound could be described as indie soulful pop, but he’s not interested in labels. “I’m just trying to make the music that I want to make and that I feel is relevant to me. I don’t really know what it is,” he says.

Lighting Matches, out today, is his first LP, and it tells his story of optimism and growth. “There’s a lot of hope in this album, a lot of pain in this album, and a lot of growing up in this album,” he says. “I grew up while making this album.” Taking a year to write and record, Grennan created the album in the middle of the turbulent age that is the early twenties. When listening to the album, it’s clear it references the moments of love and loneliness that often come with self-discovery, and Grennan insists that the biggest backstory to all the songs was just that he was on “a big old learning curve.” He adds, “I wrote them in a time where I was learning about myself, reminiscing and learning about my life.” Because the songs are clearly personal, Grennan speaks of them like they’re his children, not wanting to gloat, but proud nonetheless. When asked to pick a few favorites, he begins with “Aboard” and “Make Them Like You,” but then goes on to list the entire tracklist. “I guess every song in the album is my favorite in some way,” he laughs. But he’s less interested in unpacking the meaning of his songs than he is in letting people experience the album in their own way. “I just think people can take the songs and album for themselves and have my stories connect with their stories,” he says. “I want my songs to become their songs and hopefully it will help them out.”

There are also numerous mentions of a love interest throughout the album, but Grennan is once again hesitant to unpack the specifics, preferring instead to talk more broadly about the topic. “I’ve been both lonely and in love,” he explains, “so I wanted to put the feelings I had and put them onto a record.”

One love he is extremely open about, however, is the one he has for fellow British pop star, Adele, gushing about her, “She’s just amazing. Unbelievable writer. Unbelievable lyrics. I think she’s the voice for a lot of people and I love her.” Considering their similarities—both are British with a down-to-earth charm—it’s easy to see why. Grennan’s other idols stay true to the classics: Alex Turner, Amy Winehouse, Ray Charles, George Michael, and Elton John, who reached out last year. “Elton John called me and gave me a lot of advice,” he says. “He told me to just believe in myself and keep doing what I’m doing. He told me to never think that what I’m doing is shit.” With that solid advice, Grennan has been busy with the album release and tour and his timetable isn’t slowing down anytime soon. “I’m about to do loads of festivals in England and Europe,” he says, excited. A European tour starts in September and is followed by a UK tour in October.

The “ordinary guy from Bedford” is about to embark on a not-so-ordinary path. But while he’s happy to discuss his journey, he also wants to talk about the weird dream he’s been having. “I keep dreaming about a mate that I haven’t seen in ages. I’m like, What’s going on?” he laughs. On the topic of dreams, Grennan’s clearly thankful about the one he is living. “My seventeen-year-old self would definitely be surprised at where I am now. He’d probably say, ‘Yeah right, mate,’” he laughs. “I’m just a normal bloke who’s in a very lucky position. I’m not taking it for granted. I’m taking every minute as it comes and enjoying every minute of it.”

Lighting Matches is out today.