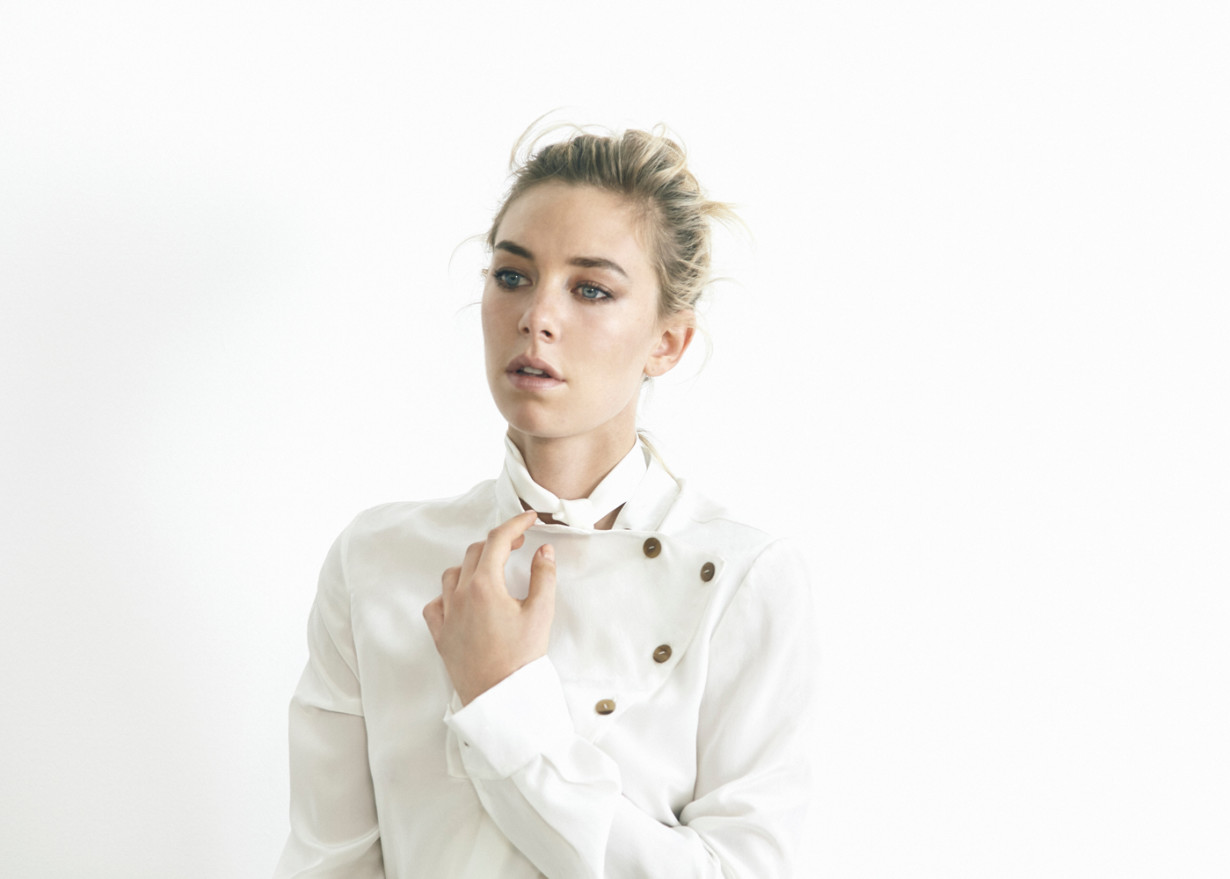 “The way that he reflects life, it’s just so beautifully believable. It’s something you can’t explain.” Down the line from London, English stage, television, and film actress Vanessa Kirby is recalling one of the first times she felt completely transported by the art of storytelling. It was the work of Chekhov, the National Theatre production of The Cherry Orchard with Vanessa Redgrave, to be exact, which left a young, impressionable Kirby with a resounding love for the medium. “I was totally there in Russia with that family for three hours and it made me feel differently about my life and my family and grateful for what I have,” says Kirby.

It is the echo of moments like these that have come to define the 28-year-old’s work—an unwavering desire to “move people,” which, judging by her ever-growing collection of IMDB credits and turns in various stage productions would affirm, has not gone unnoticed. Yet, despite being five years in on a career that is firmly on the ascent, and gaining traction as what could only be described as a star on the make, it would be remiss to assume that Kirby’s path to acting did not come with its share of setbacks. “I applied to drama school at seventeen and they said I was too young,” she recalls. “I came to understand that, for me, to act the best I could, I needed to grow and meet a ton of people and learn a bit more about life.” A year of travel followed—”I hitchhiked and did a lot of crazy stuff”—before she returned to study English at Exeter University in South West England. “I had the most transformative, amazing experience and I realized that somehow I needed to make my life about [acting] even if it was doing it for free on Sundays, or whatever. I never really aimed to make it in a ruthless, ambitious kind of way, I just knew that it was what made me happy and what I had to do,” she says. Kirby’s resolve for the medium eventually brought her to theater director David Thacker, who in 2009 cast the promising amateur in three starring roles at the Octagon Theatre Bolton in Ghosts, A Midsummer Night’s Dream, and All My Sons, for which she was awarded the BIZA Rising Star Award.

Given that Kirby’s career to date has carried her from such time-honored scripts as Shakespeare’s As You Like It to playing the female lead in television productions including Ridley Scott’s mini-series adaptation of Labyrinth and the BBC’s recent take on Great Expectations, it is safe to assume that hers is a name we can expect to see popping up more often in credits across any platform, in any genre, at any time.

Indeed, 2016 could very well be Kirby’s busiest year to date. The Brit has proven elastic with the release of three largely disparate feature films—the sci-fi action thriller Kill Command, the romantic drama Me Before You, and a period drama Genius, in which she takes on the effusive role of Zelda Fitzgerald—and appeared in two theater productions including a turn as Stella in A Streetcar Named Desire at St. Ann’s Warehouse in Brooklyn and as Elena in Robert Icke’s Uncle Vanya in London. But it is her run in The Crown, Netflix’s much-hyped new show about the young Queen Elizabeth II billed as the most expensive TV series ever produced, which is sure to elevate Kirby from cult to international status. Still, when Kirby stepped up to audition close to two years ago, it wasn’t for the part of Princess Margaret. In fact, as the early months of castings ran their course, Kirby wasn’t slated to play the extroverted and at times volatile princess at all. That was until a strange turn of events saw her unexpectedly earmarked as the front-runner for the covetable role. “It was one of those alchemy moments where everything aligns,” she says. “I had gone for another part and then a few months later they still hadn’t found Princess Margaret and I suddenly had this feeling, something that’s never happened before, and I was like, ‘Fuck, I think it might be me, I think I should play Princess Margaret. Am I mad?'” And the rest, as they say, is history. So began what Kirby dubs the happiest job of her life, one that played out over eighteen months with many months of filming to come, and one which placed Kirby in the ever-capable hands of writer-producer Peter Morgan and storied director Stephen Daldry, and alongside castmates Claire Foy as Queen Elizabeth II and Matt Smith as Prince Philip.

With The Crown, Morgan, who is known for his intricately researched films—The Queen and Frost/Nixon among them—in which he investigates and effectively humanizes some of the most significant icons of the twentieth century, once again grants his audience a factual snapshot of a moment in time. His delicately handled narrative recaptures the personal intrigues, political rivalries, and behind-the-scenes machinations of perhaps the most elusive and widely scrutinized dynasty of our time for the generation that was there, and for the generations that followed. “The monarchy is in our blood, it’s part of our whole collective identity and DNA,” says Kirby. The series, which begins with the premature death of King George VI—a moment that thrust a 25-year-old newlywed Elizabeth hard and fast onto the public and political landscape, at the same time casting a binding shadow over her younger sister—explores the first two decades of the Queen’s reign and the subsequent private and personal challenges of those that surround her. Take Margaret, who, as Kirby tells, “goes from being the young, eligible, unmarried icon of the decade to being sidelined as Elizabeth becomes the center of the world’s attention and Margaret, who is naturally suited to the public, becomes kind of ostracized.” It is Kirby’s propensity for self-reflection and complete immersion in a script that have invoked a deep emotional connection with her character. “Getting to know Margaret as a 21-year-old and the life that she lived, I have so much more empathy for her and feel very lucky for my own freedom and choices,” the actress says. “She had a lifelong struggle of wanting to escape but not being able to.”

As Kirby knows intimately, storytelling is at its most powerful when it hits a nerve, a reaction she would above all like The Crown to produce. “I really hope that it changes people’s perspective of this family. I know I certainly had ideas about them and judgments that have now been completely turned upside down,” she says. And while one can’t predict the reaction audiences will have to the ten-episode royal drama, one thing is certain: this month, The Crown will be released in 190 countries – a reality that Kirby admits she is finding hard to wrap her head around. “We had a screening recently and we ended it all like, ‘Oh fuck, people are actually going to see this,'” she laughs. “It doesn’t really seem real yet.

The Crown premieres November 4 on Netflix.