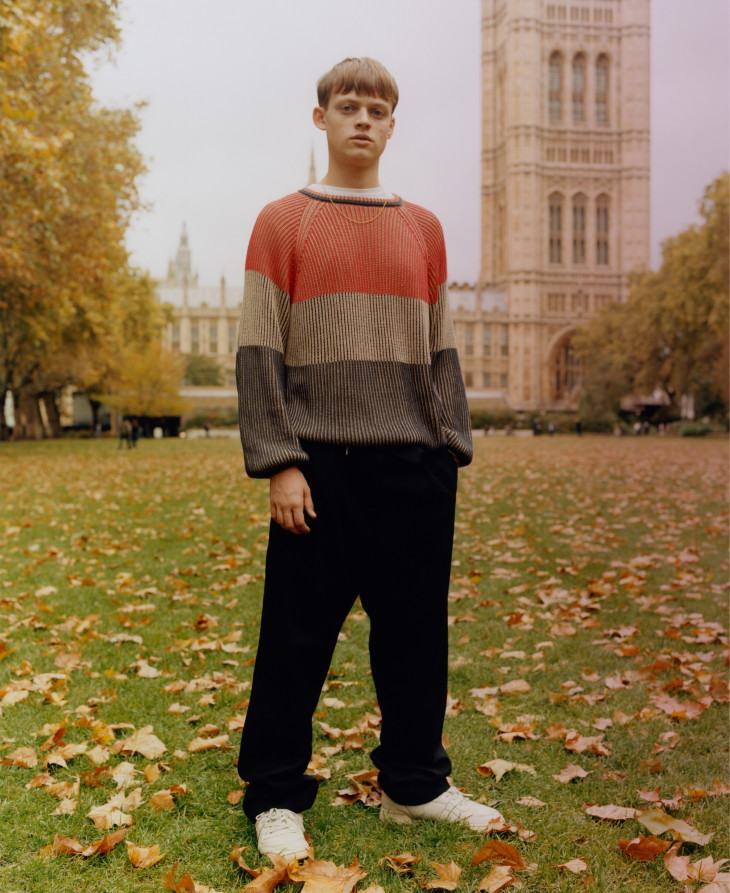 Sweater by Artica Arbox. Trousers and sneakers, worn throughout, stylist’s own.

Part of the challenge of being a rising star is leaning to master impatience. For Anson Boon, that meant spending a good deal of 2019 awaiting the arrival of two important films, one an emotionally gripping family drama, Blackbird, which made the festival rounds last fall and in which the English newcomer stars opposite Susan Sarandon, Kate Winslet, Mia Wasikowska, and Sam Neill, and the other Sam Mendes’s World War I blockbuster 1917, which recently took home the Golden Globe for Best Picture. Vastly different in their scope, the movies, taken together, demonstrate the young Boon’s wide appeal, both in a leading role of powerful intimacy and as a smaller part of a colossal whole. “I’m so excited to see the finished products of all my hard work,” he jokes. “Making films is so much fun and I feel like I have quite a bit of experience in that now, but almost none when it comes to watching the outcome as I’m still waiting on most of them!”

Boon’s busy fall began with the premiere of Blackbird at the Toronto Film Festival in early September before its rollout at the London Film Festival and AFI Fest in New York. Based on a 2014 Danish film, Blackbird covers the course of a weekend in which a family gathers to say goodbye to its terminally ill matriarch, played by Sarandon, who has decided to take her own life rather than succumb any further to disease. With its raw subject matter and heartbreaking performances, the film, in which Winslet and Wasikowska star as Sarandon’s daughters with Boon as Winslet’s son Jonathan, walks a delicate emotional line, forthright and sincere in its pain as well as its hope. “We all really loved each other,” the nineteen-year-old Boon recalls. “I think it was cast so well that we each fit into our roles in the family dynamic perfectly. We prepped for a week and filmed and lived in a stunning location on the seaside eating great food, hanging out, having fun together on and offscreen, so what you see on film really is what we were living.” After filming wrapped, the cast got matching blackbird tattoos, a striking reminder of their unique shared experience. As important as Blackbird has been to his burgeoning career, Boon was unable to travel to Toronto for its first screening, his attention and time devoted instead to rehearsals for his run as the title character of the classic play “Master Harold”…and the Boys at London’s National Theatre. Set in apartheid-era South Africa, Athol Fugard’s semi-autobiographical masterwork is an incisive study of racial inequality and the imbalance of power, with Boon’s teenage Hally lording over the two “boys”—adult black men who have worked for Hally’s family since his childhood. “It felt like a whole, complete world in every way—just so perfectly designed and fascinating, but obviously so disgusting and toxic too,” Boon explains about the play, in which he starred opposite Lucian Msamati as Sam and Hammed Animashaun as Willie. “It had so many contrasting themes but it felt so compact and to-the-point and almost like a bite-size chunk of an important message. Straight away, I wanted to dive into that world and challenge myself to take on this character and these themes. It’s been very dark but very rewarding. Hally is so complex and I’ve learned so much from tackling him.”

To prepare for the role, Boon spent time delving into the history and origins of apartheid, reading up on the legacy of institutionalized racism in 1950s South Africa. Coming to terms with Hally was, he admits, a compelling challenge given the character’s cruel treatment of the two men. “I had to identify what formed Hally’s opinions and what Hally was actually fully aware of,” Boon explains. “It was my massively gruesome job to attempt to justify apartheid in the eyes of my character so that I could correctly play Hally. To try and sympathize with thoughts like this and inhumane systems is impossible, but I had to really use my imagination to live in Hally’s shoes and that’s been the most challenging but skill-stretching part of this process.” Jacket by Nanamica. Shirt by Qasimi. Trousers by Wood Wood. Tie, stylist’s own.

At his young age, it’s no surprise that Boon still meets every opportunity as a chance to learn and grow. He says he’s wanted to be an actor since he can remember and got an early start in his first professional role at just fourteen while taking part in local drama clubs. As work picked up with a number of roles in short films and in television series, he chose to focus on his career, eschewing the traditional path that most English actors take. “I was learning so much on the job and while I was being successful I didn’t want to stop the momentum by stopping working and going to do formal training,” he explains. “I think training is so valuable, but I look at all my friends who went to college to train in things like plumbing or building and they all say they never really learned how to do their job properly until their first day on a building site. I guess it’s kind of like that! I skipped the formalities and learned those as I’ve gone along. The theater has taught me so much technique and skill and now I feel like I’ve been to drama school, to be honest.” No amount of training could have prepared him for his time on 1917, however, the single-take epic that follows two young English soldiers, played by George MacKay and Dean-Charles Chapman, as they attempt to cross no man’s land under German fire to deliver an urgent message. Boon has a supporting role as a fellow soldier and says what struck him the most about his experience was the scope and professionalism of the top-line team. “With so much money you are able to really push the boundaries in terms of set design and props, etc.,” he elaborates. “The level of planning, detail, and design from the crew and creative team was like nothing I had ever experienced before. You could easily mistake your surroundings for the actual trenches and battlefields. It’s so great for actors to be able to work in that sort of environment because you have every resource you need to be able to sit in your character’s shoes and just be rather than act.”

Whether on a big-budget studio film or an intimate three-man play, it’s clear Boon is approaching every project with the same curiosity that first got him started, greeting each venture with an invaluable open mind that will serve him well in the years to come. ”The idea of getting to be all different kinds of people fascinated me,” he says. “I love people-watching and am consistently surprised by all the different kinds of personalities there are in this world. When I read a script and a unique character jumps off the page, I immediately put myself into their shoes and naturally try and imagine meeting this person in real life. It’s fascinating! That’s why I love it.”