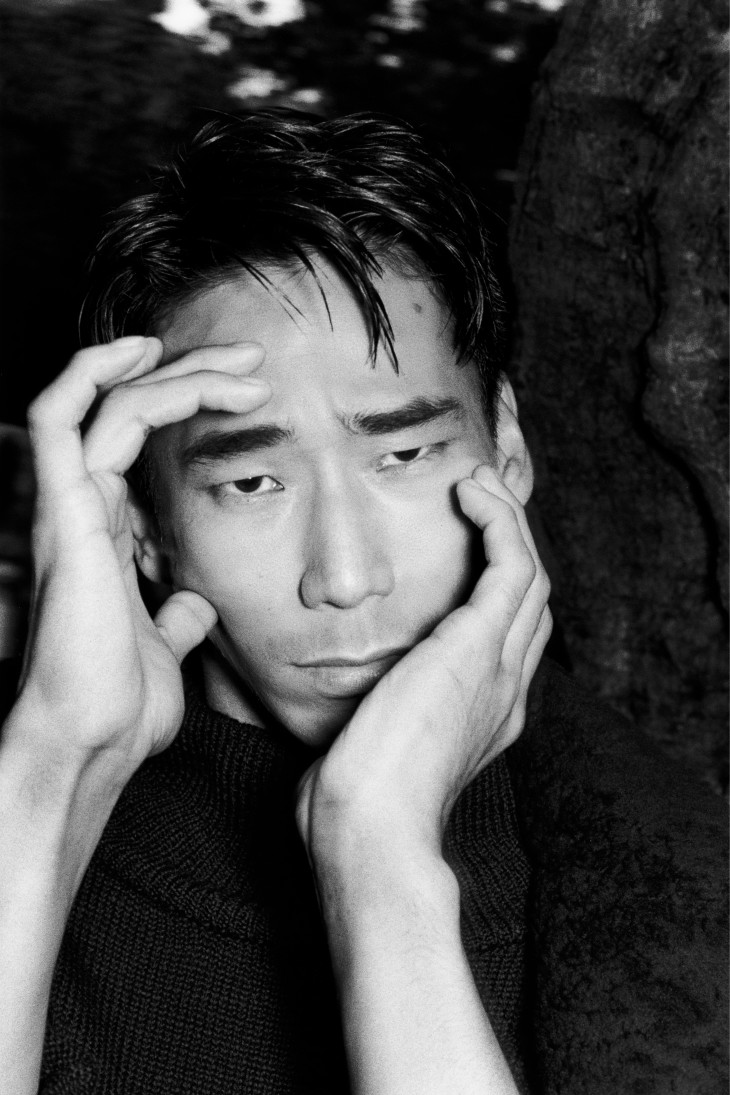 Caught in the middle of Netflix’s new film Earthquake Bird, between Swedish translator Lucy Fry (Alicia Vikander) and the newly-arrived American Lily (Riley Keough)—is Teiji, an inscrutable and handsome photographer played by Japanese actor and dancer Naoki Kobayashi. Based on the 2001 novel by British author Susan Jones, Earthquake Bird is set against a film noir background of 1989 Tokyo, the metropolis where all three characters converge looking to escape their troubled pasts. Lucy and Teiji bond over a shared reserved understanding of each other’s quirks which is tested when the bubbly and affable Lily bounces into their lives. Directed by Wash Westmoreland and with music by Atticus Ross, the film opens with an interrogation room scene as detectives are investigating a possible murder committed in connection with the trio. Kobayashi may seem to be an unknown name plucked from obscurity to star alongside Keough and Vikander, but in fact, the 35-year-old has been adored by audiences for over a decade and is well established in his home country of Japan. Best known for his dancing and choreography work with J-pop groups Exile and its highly popular offshoot Sandaime J Soul Brothers III, Kobayashi still tours Japan filling stadiums of fifty thousand. Although he knew from a young age he wanted to be on stage, his start with the J-pop group that found him fame was serendipitous. “I was just a street dancer practicing on the street in front of a bank, playing the radio and dancing all night,” he recalls. “I met a guy who was a member of Exile and he invited me into the group.” Kobayashi first joined as a choreographer before becoming a performer and he understands that his surprising roots as a successful dancer offer an opportunity in waiting. “I can use these experiences to be an actor,” he says. “Recently I took a lot of acting training in LA or Japan to translate those kinds of experiences to be an actor. Now I feel I am unique because I’m an actor with that kind of [dance background] with Japanese experiences. That’s my strong point I think.”

With only a handful of Japanese acting roles under his belt, Earthquake Bird is Kobayashi’s first non-Japanese film, and he says he spent months preparing and studying in order to connect with Teiji, a mysterious character who reveals more about himself through his photography than his conversation. From his first reading, Kobayashi knew he wanted to play the role, certain he could bring his personal experience to the character. “I had empathy with the character called Teiji from the first read. In the film, from the outside, he seems to be mysterious or have a closed mind, but I felt he follows his dreams and I could understand that side of the character,” he says. “I was trying to find the connection between myself and the character. He’s a photographer with a troubled past. Photography is kind of his second nature, like dancing for me, so I learned the whole process of photography: developing, processing, printing. At that time it was what was useful for me to be a good actor.”

Even though he was only a child during the Eighties, Kobayashi’s own personal experience of growing up in Japan meshed well with Westmoreland’s interpretation. “I remember the atmosphere and the air. I used that feeling to get the character and also I talked about Japanese culture and customs with Wash, the director, a lot,” Kobayashi elaborates. “He lived in Japan before, actually at that time in 1989, the 1990s, so he knows Japanese authenticity. Before starting the shoot we had lunch sometimes and talked about things for the character and also the film itself. He appreciated me giving him that perspective. Also, the film was shot in my home country, Japan. I know Japan deeply but the film has other perspectives of Japan because I think it takes the soul from the book. She published in London and also Wash is British, so the film has that element which is created by people from outside Japan.”

Kobayashi has always approached all his artistic endeavors with the same vigor and thoroughness as he did Earthquake Bird. In his prior roles, for example, he discovered a deep love for traditional Japanese culture. “I did some films about traditional Japanese culture and also samurai stories,” he says about his role in Tatara Samurai, a 2017 samurai film. “At that time, I learned about the culture of Japanese film and samurai culture and how they connect with the modern culture in Japan. Now I really feel Japanese people need to feel that culture again and it could be connected to the [rest of the] world.” As for his next acting role, Kobayashi says he would love to combine his martial arts and dancing skills into playing a character in the Marvel Universe. But whatever is next, he will continue to find himself through his performances. “Sometimes it’s hard for me to say something or to express my feelings,” he says, “but dancing and acting give me the opportunity to express myself.” With a focused drive and a strong performance as the enigmatic Teiji, it’s unlikely this will be his last international film. “I want to be a memorable person for people, I don’t know why. I hope to do something as a performer,” he says. “If I could be that kind of person or performer in the film world, people could remember me forever.”

Coat and top by E. Tautz. Jumpsuit by Issey Miyake.