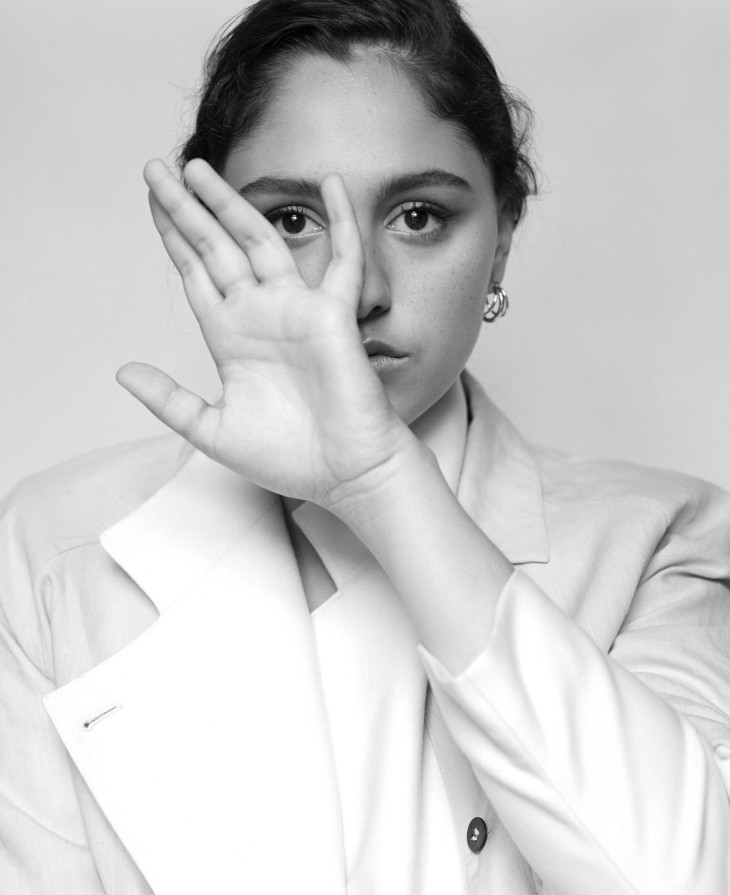 As a kid, Rhianne Barreto had only been to the United States once to visit her aunt in Arizona. She was twelve. She stayed a week. Back home in London, she was the second oldest of nine children—a number at which, she says, “you just start kind of raising each other”—and had always been interested in acting. So in 2016, she was excited to land the lead role of Mandy in Pippa Bianco’s first feature film, Share, an emotional case study that brings to light the often-blurred lines of consent. Barreto would be making her feature début as well. During auditions, Bianco, both the film’s writer and director, flew from the United States to England, where she spent the week with Barreto “watching films, eating snacks, doing the scenes and just chilling,” as the 21-year-old actor describes it, “which I think is pretty smart” if you want to really get to know someone. After she got the part, she applied for her visa and went to the American Embassy to get it finalized—but couldn’t.

This was January of 2017, during the United States’s Muslim ban and around seven years after her first visit to America. The woman at the embassy asked where she was from. “I’m British,” responded Barreto, who was born in England to British citizens. Her mother is English; her father was born in Iraq. “She was like, ‘You don’t look British,’ and I thought, ‘Oh, this is a problem.’” Barreto, who is approachable and warm in person, didn’t want to cause trouble—she just needed her visa so that she could get to filming. At this point, she explains, she was spending three hours a day watching basketball in preparation for her role (Mandy is on her high school’s varsity basketball team) and she hadn’t been taking any other auditions. She was polite and agreeable, smiling and nodding throughout the interrogation. Asked if she spoke Arabic and questioned repeatedly about whether she was in fact British, her visa was refused for no reason but the color of her skin and she walked away that day crying. “We applied again, they did the same thing and rejected it again. We were weeks away from shooting the film and Pippa was like, ‘We’re moving [filming] to Canada.’ It was crazy,” Barreto laughs. “Now I’m here.” She is referring to New York City, which she recently visited for a whirlwind press tour for Share, but also to her suddenly ubiquitous, larger-than-life two-dimensional face, which is plastered all over posters at subway station across the city “like a huge middle finger,” she says. Vintage jacket from Strut, London. Shirt by agnès b. Earrings by Pebble London.

To say the least, her experience at the embassy was painful. But Barreto made the most of it. “As an actor, I have to use the things that happen in my life to empathize,” she says. Share is about a teenage girl who, after a night of heavy drinking, wakes up to a video showing boys from school making a joke out of taking advantage of her unconscious body. Barreto stars alongside Charlie Plummer and Nicholas Galitzine in a story that follows Mandy as she deals with the aftereffects, pursues legal action based on the evidence, and tries to decipher what exactly happened that night. “I’ve never been sexually assaulted, so I was portraying a traumatic event and I wanted to do survivors justice,” Barreto explains. When she got stuck in England, she realized then that the experience offered a hint of what Mandy goes through in the film. “The lack of control, not understanding why it’s happening—and maybe you’ll have to deal with those consequences for the rest of your life,” she adds. “That is such a powerful thing.”

Barreto’s trenchant, introspection-triggering performance alone makes Share worth watching and she calls Bianco a “genius” because she writes characters who act and think like real people. “Every character is trying to make the right choice and it ends up wrong because we’re human and that’s what happens all the time,” she elaborates. For example, “It’s so beautiful that Pippa has created these parents who aren’t like, ‘You stupid slut’—they don’t hate me. They love me, and maybe [we] shouldn’t have gone to the police, but that’s what they thought was best. That’s what this film is.” She recommends watching it twice. Coat by Lemaire, stylist’s own. Earrings by Rena Sala.

For someone as outgoing, self-deprecating, and funny as Barreto—it would be difficult to dislike her—watching her portray Mandy means recognizing how powerful she is on screen. Bianco recognized it in her early on: Moving an entire production to a different country for one actor is virtually unheard of, but it paid off; Barreto won Best Actress at the Sundance Film Festival in January. It’s no surprise then that she has spent her whole life (apart from a brief stint in which she thought she might become a wedding planner: “I must’ve watched a lot of Bride Wars or something. I don’t think I’d be good at that,” she laughs) pursuing a career in acting. At the age of ten, she got her first role in a school play. A lover of Shakespeare and the theater, she went on to study at London’s National Youth Theatre and the prestigious Brit School, after which she was selected to perform as part of a showcase at Trafalgar Studios. She then acted in a recurring role on the CBBC web series Dixi and, more recently, the Amazon Prime series Hanna, David Farr’s remake of the 2011 Saoirse Ronan thriller about a girl born in the forest living on the run from the CIA. In it, Barreto plays Sophie, best friend to Hanna, portrayed by Esmé Creed-Miles.

Barreto herself is an easy conversationalist who appears curious about everything and everyone around her. She does not seem to hide from the spotlight, but she does express discomfort at the idea of being treated “like a princess” on set. This tendency might be in part the result of the humbling experience of growing up in a family of eleven, but it also seems innate to Barreto, for whom acting is purely about passion. “I want to be in love with the next thing I do,” she says, so right now “it’s a lot of waiting and seeing.” Ultimately, directing—theater productions in particular—is somewhere down the line. “I love the physical,” she explains of her love of the stage. “I like that there are no rules. I don’t believe in blocking too much. There’s a level of blocking you have to do, but to be an actor free on stage, to just follow an instinct without worrying about hitting a mark or a camera or a person, there’s such a freedom in that. That to me is so exciting. I feel like I can do that.”

Share is out now on HBO. Hanna is now streaming on Amazon Prime.