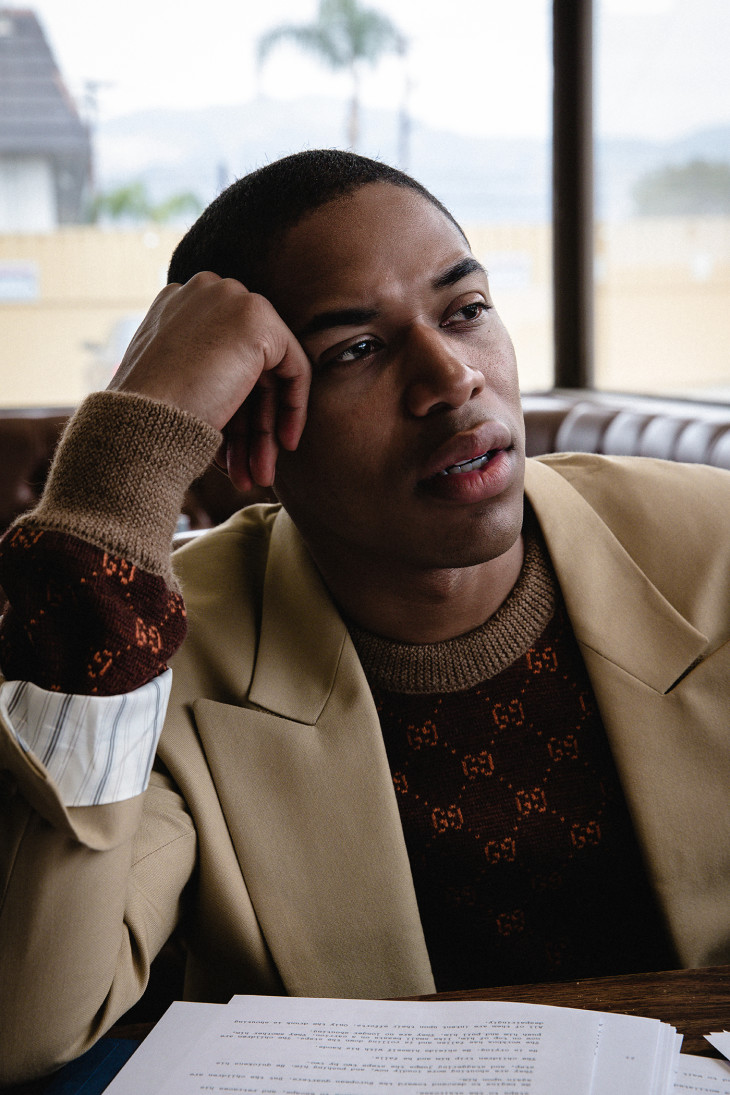 All clothing by Gucci.

Luce is, on the face of things, a model student. Debate champion, captain of the track team, and future valedictorian, it’s clear early on in Julius Onah’s bracing new film of the same name that he is a star from all angles, having overcome a past as an orphaned child soldier in Eritrea after being adopted into upper-middle-class comfort by a white couple, portrayed by Naomi Watts and Tim Roth, in suburban Virginia. It would appear, at first glance, that we are about to be subjected to yet another tale of Black Exceptionalism, a story about an African teenager who has made good by assimilating into white American culture, easily surpassing all the expectations it has set for him. But thankfully, nothing about Luce—or Kelvin Harrison Jr’s riveting Luce—is as it first seems.

Luce’s exalted trajectory is quickly shaken off course by his teacher Harriet Wilson, played by a quietly intense Octavia Spencer. After he writes an admiring essay about Frantz Fanon, the Caribbean theorist and philosopher who, as Harriet notes, at times advocated violence in the name of decolonization, she finds cause to search his locker and discovers fireworks hidden there. Luce protests that they aren’t his, arguing that he and his teammates often share lockers, but the confrontation between student and teacher escalates rapidly, with unexpected consequences. Both Luce and Harriet are black, and their conflict is shaped and heightened by their awareness that they are taken as representatives by their largely white colleagues, asked due solely to the color of their skin to shoulder this additional burden. Harriet, after decades of experience, has come to acquiesce with resignation and is trying to assimilate Luce into this system, which he rejects. Harrison’s performance is a masterpiece of ambiguity, his smooth equanimity masking his vivid passion and indignation. “Luce to me is a seventeen-year-old kid with incredible capabilities,” Harrison explains. “He’s very talented, he’s very intelligent, and he’s been given the opportunity to be adopted into this very privileged, well-off white family so now he’s become the token and exceptionalized. He’s grappling with what to do with all this expectation and power that’s been given to him.” All clothing by The Kooples.

Harrison dug deep to understand Luce, now playing the role of a typical American teenager while hiding intense scars from his past. He revisited Cary Fukunaga’s Beasts of No Nation and watched several documentaries about child soldiers as well as met with a child therapist, who explained how similar victims work to process their experiences. “I created that backstory for myself, so I colored all these little pictures as baby Luce,” he recalls. “I put them in my trailer to know where he came from and what he overcame.” He read widely on Fanon and wrote the twenty-page paper that serves as the catalyst of the film: “All those things helped me come in having the whole backstory in place and knowing who I had to be and the new mask I had to put on.” Spencer read the essay and gave him a B+.

In holding up Luce as a model African-American, society has established nearly impossible standards for him and it is understandable when he ends up repudiating them entirely. Harriet insists on his serving as an exemplar for the other black students—and the student body as a whole—but Luce refuses to accept easily his assigned role. To inhabit these dynamics, Harrison pulled from his own experience attending a private high school in New Orleans where “anything that I was, it was no longer acceptable, so I immediately had to assimilate to the culture that was set for me.” He understands that Luce and Harriet ultimately share the same goal, even if their methods to achieve it are at odds. “She’s had to overcome her own systems of prejudice and her own obstacles in life to get to where she is and she feels like this is a system that works and this boy needs to do the same,” Harrison explains. “My dad’s a teacher so I empathize with Harriet’s point of view. You can go and you can side with anyone but I as Kelvin the actor had to make a decision to know that Luce is a budding revolutionary. At the end of the day, he’s like, ‘If I don’t remove this woman from power who is actually not here to help me who was supposed to be here to help me’—in Luce’s eyes—‘then what am I doing for my community? What am I doing for the future? What am I doing for the world?’” With his own increasing prominence, Harrison says he learned from Luce not to succumb to the pressures placed on him by others. “I’ve learned my own power. I’ve learned my own privilege,” he elaborates. “I’ve learned not to allow the expectations on me to become a burden. It’s not in my control, it’s not my responsibility.” Luce, adapted from a 2013 play by JC Lee, arrives in an environment in which identity can be seen as a political statement, but Harrison is wary of ascribing too much of an obligation to the film or himself. “We see these two people trying to fight for the same thing, which is this equality and this excellence that we would like to achieve in our community, but not knowing what is the best way to do it,” he says. “I didn’t really have to think about it before, but now I’m more aware of it and even my position as an actor in the industry. Everyone’s like, ‘What do you want to do next?’ and I don’t know but I really just want to live day by day like Luce. Why can’t I just exist and choose things just because? Sometimes it seems like there is some huge responsibility to be aware of everything and maybe I just want to be an artist. I struggle with that too and I’ve learned not to put that pressure on myself. I don’t have to do that. I’ll do my best as I can.” All clothing by The Kooples.