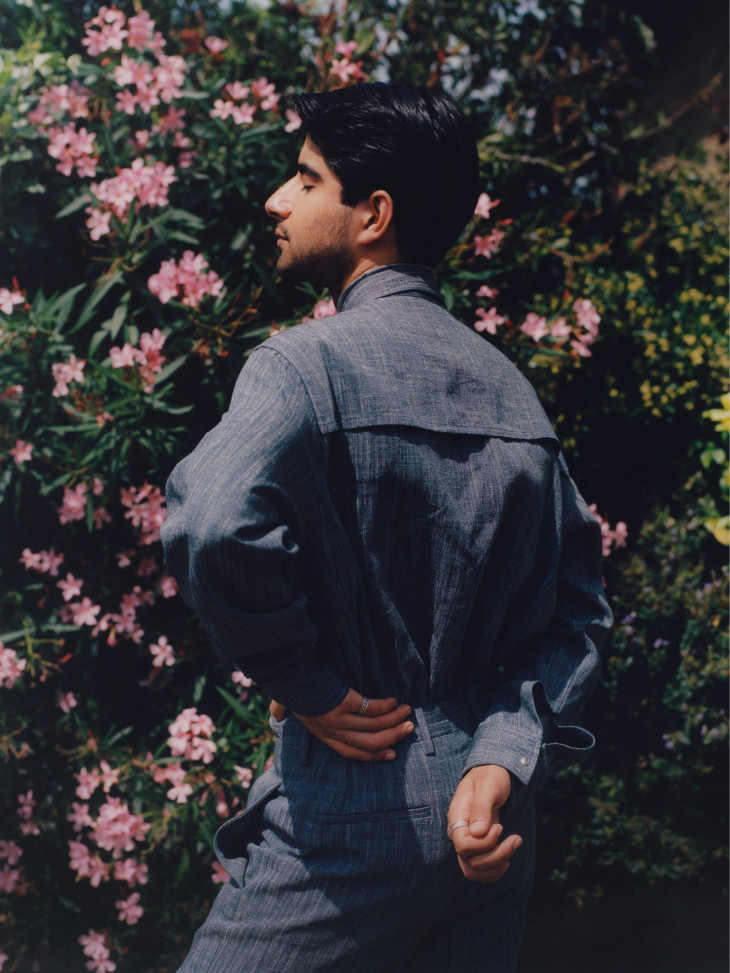 Jacket and trousers by Jil Sander. Turtleneck by Dior Men. All jewelry throughout, talent’s own.

Instead of adding to the long list of music biopics that have become tentpoles in Hollywood, the new Gurinder Chadha film Blinded by the Light captures the meaning fans actually find in music itself. Viveik Kalra plays Javed, an aspiring writer who’s desperate to escape his working-class town of Luton when he finds himself enraptured by the music of Bruce Springsteen. It’s an ode to fandom, and while Kalra brings emotional dexterity to the role, a fan he was not. “I mean I wish I could say that I was, but I definitely wasn’t,” the English actor admits—nearly to the point of ridicule. “I had heard his name, I had been vaguely familiar with the sound of the words ‘Bruce Springsteen,’ but apart from that, not at all. Hadn’t heard any of his music. I thought that ‘Hotel California’ was a Bruce Springsteen song, which many a time now I’ve been told: it isn’t.” Kalra owns up that freely because of how much has changed since then. In the film, Javed happens upon the music of Springsteen—already thought of as the old guard in a 1987 world filled with synths—and immediately connects to the working-class escapism the New Jersey musician describes so vividly in each lyric. “I didn’t listen to any of his stuff, so really playing this character that became obsessed and lived his life by the words of Springsteen, I had to do that myself,” Kalra explains. “What it enabled me to do was have this, I guess you can call it spiritual—that sounds really pretentious—but spiritual experience, in which while I was a character in the film who falls in love with the music of Bruce Springsteen, I was also the actor in the film falling in love with the music of Bruce Springsteen.” His newfound fandom was cemented at the première, in Springsteen’s hometown Asbury Park no less, when the Boss showed up himself. “No one told me he was going to be there, and he came around the corner on the red carpet and I just could not talk for the rest of the evening,” Kalra recalls. “I fell to the floor and started hailing him.”

Blinded by the Light isn’t only about fandom, but also how art can help us understand our own lives better. Javed faces a series of decisions on how he should enter adulthood, choosing to move away from his struggling family, confronting the prevalent racism towards Pakistanis at the time, and finding confidence in his own words. It’s a rare coming-of-age film that stars a minority lead, something Kalra relished. “I’ve been very lucky and very privileged and I’m in a very grateful, lucky position now,” he adds, “but I think just a few years ago people didn’t have the opportunity that I do now, looking like myself, to play nuanced roles and characters, because higher powers stamped those people into whatever they wanted to stamp them into, to be quite honest.” All clothing by Alexander McQueen. Luckily for Kalra, he’s come up at a time when there’s more projects and more roles for minorities than ever before, though he could never have predicted that. He still struggles to express how exactly he ended up in his position, leading movies and covering billboards around the world. “When I was younger my family nudged me gently—gently is the key word—nudged me very gently into theater classes and youth theaters and drama classes,” he says. “There I had my moment of recognition and realization. Even still at that point, I was like, ‘I have no idea how on earth this could possibly turn into a career.’ Wasn’t even on my mind.” He’s quick to recall the challenge even the hardest working actors face and attributes his success to at least a little bit of serendipity. “I work very hard, I believe, but it would be silly to say that everyone who works hard has the opportunity that they deserve,” he elaborates. “Things don’t happen when you deserve them, generally speaking; things just happen when they happen. If things do happen when you do deserve them, then you’ve hit the jackpot.”

His breakout year started earlier this summer with another project by Gurinder Chadha—previously best known as the director of Bend It Like Beckham—this time the British period drama series Beecham House. “That is beautiful because that is India in 1795, which is a period in time that hasn’t been seen on screen before,” Kalra explains. “It’s pre-colonial, so you see this raw, beautiful, untouched India in which the English and the French are merely visitors.” In it he plays opposite Tom Bateman‘s John Beecham as Baadal, a strong visual departure from Javed, going from head-to-toe denim to sporting a full mustache. “I think all my roles it’s like, ‘Let’s make this lad look like the silliest thing,'” he laughs. “I didn’t love it in the moment, but looking back at it I love it, because I can be that character, that person, in that moment. If you were to let your self-consciousness take over, you could do considerably fewer things.” Top by Versace. Trousers by Lanvin.

Beecham House was actually the first period piece Kalra had ever seen. Despite his passion for acting, the lack of diversity onscreen made it difficult for him to relate to characters, even at an early age. “I did reach a point where I did find it hard to watch things that didn’t have a brown face in them,” he says. “Of course, because I think from when you’re a child to when you grow up if you see no representation, if you see no version of yourself on this TV, it’s quite alienating, it is quite challenging to accept. Now that there’s an influx of it, I’m like, ‘Right, let me just find everything with all-Asian casts, all-South Asian casts, and let me try and get in as many of those as possible.” Beecham House not only features a strong minority cast, but Kalra found that in both of Chadha’s projects he had the opportunity to present minorities in a new light and finally create the kind of work he would want to see himself. “I think just how culturally uplifting they were, I think that’s something that’s incredibly important,” he says. “I think they’re both sort of healing projects in that they seem to showcase the pitfalls of something or characters in a situation, but then uplift them in their cultural significance over the years.”

Blinded by the Light is out now.