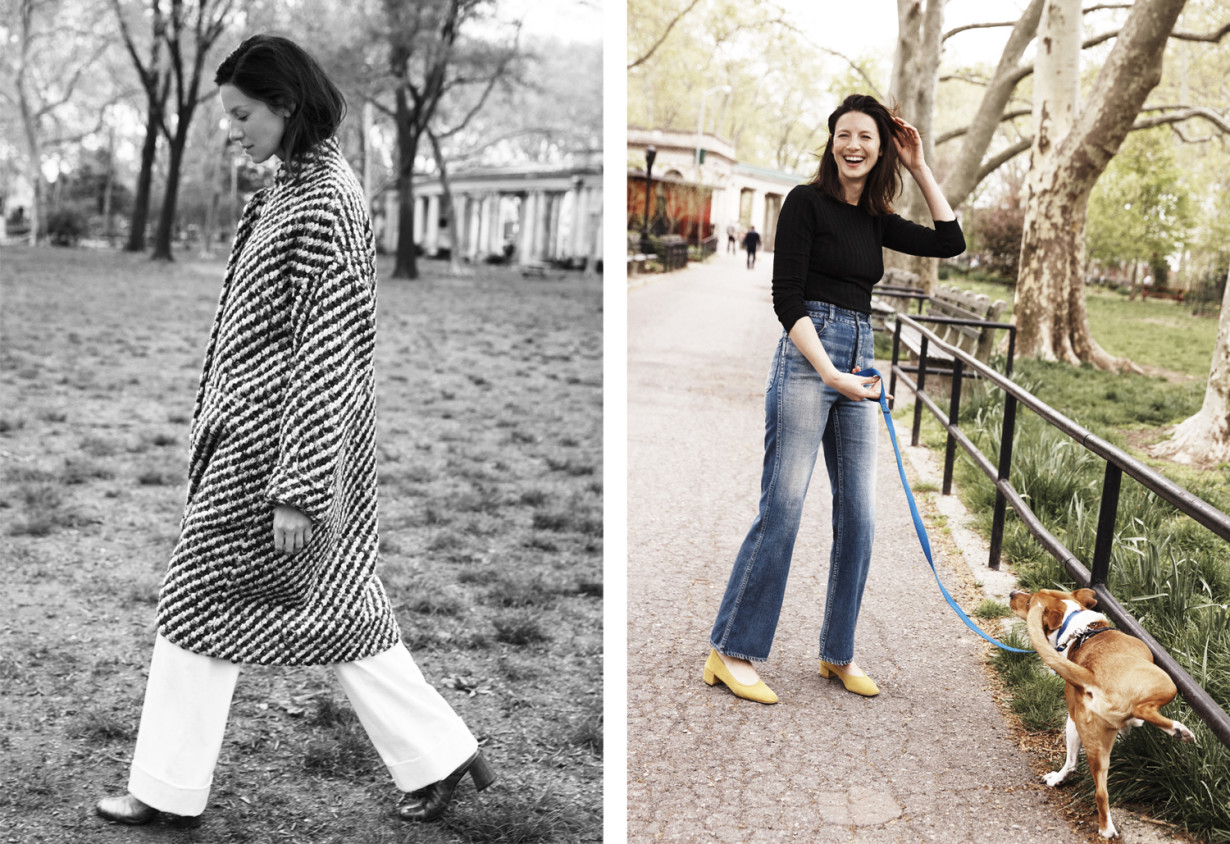 Left: All clothing and shoes by Trademark.
Right: Top by Simon Miller. Jeans by Visvim. Shoes by Maryam Nassir Zadeh.

For the 36-year-old, Dublin-born former model Caitriona Balfe, acting was a long time coming. “I’ve always wanted to act since I was a kid and it was something I did in local theater and school theater, all of those things,” she recalls over the phone from Los Angeles. “Then, when I left high school, I started a degree in theater studies in Dublin and it was when I was there that I got scouted and given this opportunity to go to Paris, and that opportunity at the age of eighteen seemed like a good idea.”

And who could blame her? Balfe moved to Paris and went on to model for almost a decade, walking for Chanel, Louis Vuitton, Givenchy, and dozens of others, and starring in campaigns for the likes of Calvin Klein, Victoria’s Secret, Dolce & Gabbana, and more.

It was when she was later living in New York, almost ten years after leaving school to first work in France, that she started to reevaluate the course of her career. “I sort of got to the point where I had been very in fashion, I had some great years, and then it sort of felt like I wasn’t excited by it anymore and I wanted to do the thing that I had always felt was the thing I was supposed to be doing,” she says. Balfe signed up for acting classes in New York and, soon after, quit modeling and moved to Los Angeles. Left: Vintage shirt from What Goes Around Comes Around. Jeans by Nili Lotan.
Right: Top by Saint James. Jeans by Visvim.

At first, it was a slow move to the screen. “Well, it’s crazy. I mean, I was thirty,” explains Balfe. “To walk into that industry with no credits and start at the bottom—a lot of people were like, ‘Ah, you’re crazy.’ You definitely need a little delusion [to keep on going].”

It took Balfe three and a half years of auditioning, with the occasional bit part coming eventually before she landed her breakthrough role—the sharp, strategically driven, sexually empowered Claire, the lead character in Ronald Moore’s historical fantasy Outlander on Starz. In the series, Claire jumps from her life as a nurse in post-World War II, 1945 England to eighteenth-century, violent, and pre-parliamentary Scotland.

“What struck me about it was how exciting the project was and the range of what this character goes through,” Balfe says. “As an actor, you’re looking at it like, ‘Wow, I’m going to get to do all of these things and go through all these various emotions and situations.’ It felt very exciting and not only was the character the central focus of the story, but she was smart, she was driven, [and] she was funny.” In short, Claire was (and continues to be) a nuanced, fully developed female figure, a pleasure to play—and an arguably rare protagonist.

Now, Outlander is well into its second season—and Balfe is embarking on new projects. She currently appears in Money Monster, Jodie Foster’s just-released thriller that tells the story of a man (Jack O’Connell) who snaps and takes a TV anchor (George Clooney) hostage on live television after losing everything he has in an investment gone wrong. Balfe plays the communications executive in charge of explaining the company’s massive (eight-hundred-million-dollar, to be exact) loss to the public. Julia Roberts stars as the lead producer on the hijacked show.

“It was crazy surreal,” recalls Balfe. “[We were] filming in New York, and I lived in New York for so long, but I was modeling when I was living there. It was always a dream to be with one of those film crews you see on the side of the street, and my first day I remember being at the Grace Building where I used to go on castings and we were filming in the lobby and at one point I was doing this whole big scene with George Clooney and Jack O’Connell. It was so surreal. But very quickly the mystique of who [those stars] are fades away and you get down to work as actors. They were all so lovely and welcoming and generous with their time and everything. Yeah, it was really great.”

The film is a timely, edge-of-the-seat thriller and socio-political analysis. “Initially, [my character is] quite a naïve woman who believes the party line and is having an affair with her boss,” says Balfe. “As the movie goes on, you see her eyes being opened and she has this awakening of conscious—she has to really look at what her part as a cog in this massive wheel is—and what the consequences of that are.”

Now back in her own life with Money Monster out, Balfe is living out of a suitcase. “Hopefully this summer we’re going to do another film. We are just working out some of the details about it, so I can’t talk about it yet, but that should be exciting—and then we’re going to wait and see if Outlander comes back for season three,” she muses. “We are all quite hopeful and quite confident that we are, but you never know until they officially announce it. So yeah, it’s just more of the same.” Everything is the same, but nothing is at all. Left: Coat and jeans by La Garçonne. Top by Suno. Shoes by Trademark.
Right: All clothing by APC.