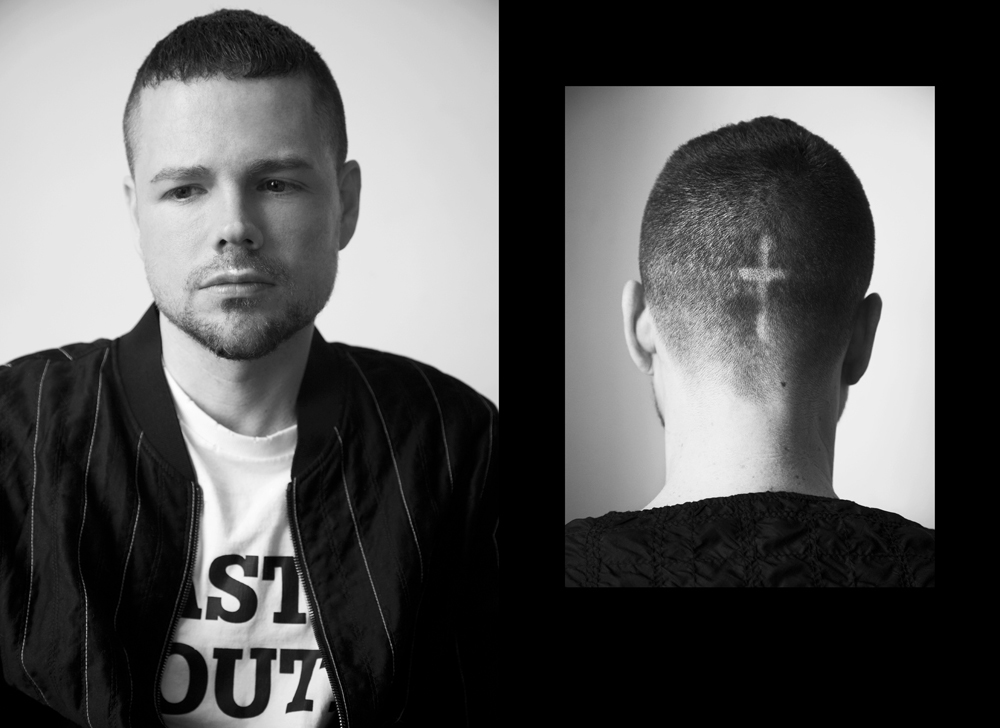 Styling by Akari Endo-Gaut at Frank Reps. Grooming by Cecilia Romero using Bumble and bumble at the Wall Group. Production by Brian Brewer at 2b Management.

It has all the hallmarks of a teen slasher flick—an abandoned trailer park, eerie woods at night, indolent adolescents, and even a ghostly apparition. But Sunset Edge, the début narrative feature out later this spring from the multitalented Daniel Peddle, is far from a typical horror film.

Set mostly in a dilapidated trailer park on the border of a barren forest, Sunset Edge marks a foray into new territory for Peddle, a painter, author, illustrator, and filmmaker whose day job at the Secret Gallery involves nontraditional street casting as well as populating the lineups for runway shows for Givenchy and 3.1 Phillip Lim with his partner Drew Dasent. Focusing on five teenagers on a lazy afternoon that soon becomes all too threatening, the movie captures the pleasant idleness of youth, edged with the anxiety of growing up.

Peddle’s first two films, the documentaries The Aggressives and Trail Angels, both examined subcultures—the former focused on black lesbians who pass as men and the latter on volunteers who aid hikers along the Appalachian Trail—with an honesty and incisiveness he learned as an anthropology major. “Studying anthropology is like putting a filter on a camera,” he explains. “It changes the way you see the world. While it can focus on understanding the social differences between people as expressed through culture, it almost makes you realize that we really are all the same and share a common origin, and the differences are just social constructs. The study of humanity in this manner really can tear down the walls that separate us, and this has huge spiritual ramifications. It took away my fear of the ‘other’ because it made me realize there is no ‘other’. So this was like the universe gave me an all-access pass to explore.”

That openness to new approaches can be seen in the origins of Sunset Edge, which Peddle says were inspired first and foremost by the film’s location. “My parents had been telling me a lot about this abandoned trailer park, and the moment I saw it, I knew I was going to make a film there. The trailers ranged from totally empty, like gutted, to being as if the family had gotten up from dinner and never returned—tables still set, dishes in the sink,” he explains. “Much of my initial goal was to create a narrative that would allow us to harvest all the creepy qualities inherent to the location without a bunch of trickery.”

The script that resulted, a meandering tale that gently jumps through time and perspective, offers long stretches of near silence, as the characters brood or nap or quietly explore the disorienting world around them. Much of the dialogue that remains was the result of improvisation exercises, meant to encourage the nonprofessional actors into connecting themselves to their characters tightly enough that they could be set free and the camera crew could fade into the background while shooting, as in a documentary.

As with Peddle’s previous projects, the casting was a key component of Sunset Edge, and it benefited from his practiced eye. (Peddle, after all, scouted Jennifer Lawrence as a model while she visited Union Square with her mother at the age of thirteen.) “The documentary influence was definitely a crucial aspect of the casting, because I did not want the film to have that self-conscious acting style you see so frequently in ‘Sundance’ films,” he says. “What became really important was finding a cast who had a really great dynamic between them. For this reason, I cast my amazing nephew Jacob Ingle and his two real-life best friends, Will Dickerson and Blaine Pugh, as a trio, and built the rest of the cast around them. They are a really odd threesome, kind of a casting director’s dream. You probably would never ever put them together, but here they were, with this lifetime of friendships between them, a stranger-than-fiction motley crew.”

The young actors are often framed by glowing landscapes that demonstrate a practiced æsthetic vision, one that is equally comfortable with the lambent radiance of sunset and the unpierceable blackness of night. “As I am a painter, I am very sensitive to light and how to get what you want from it and also how to submit to it,” he says. “The title of the film refers to how this dead-end road is positioned. At dusk, when you go down it, it’s like it takes you to the edge of the woods, the edge of light.”

That dead-end road, and the forsaken former homes that line it and sit, peeling and shattered, like gravestones, is almost a character in its own right, one that has taken on additional emotional potency in an age of underwater mortgages and foreclosures. “The protagonists leave their perfect suburban homes in their nice cars and travel deep into the woods to a forgotten world besieged by poverty and decay,” Peddle explains. “What at first seems curious and cool soon turns into a nightmare. It is kind of like a cautionary tale for slumming it.”

But the film is, in the end, far more personal for Peddle than it is political. It strikes close to the heart of a filmmaker whose North Carolina accent remains strong even after many years in New York. “I had some specific themes I wanted to address, like identity and isolation and how the South is changing. I wanted to create this portrait of ‘disaffected youth’,” he explains. “When you are making a documentary, you are still filtering the world, choosing who you are going to focus on and then editing their words according to the points you are trying to make. What is considered an attempt at ‘objective truth’ in a documentary is actually so extremely culled and controlled by the director that it’s more like the process of writing a poem. In some ways, I found narrative work to be more honest because there is no veil of truth surrounding it.”

Styling by Akari Endo-Gaut at Frank Reps. Grooming by Cecilia Romero using Bumble and bumble at the Wall Group. Production by Brian Brewer at 2b Management.