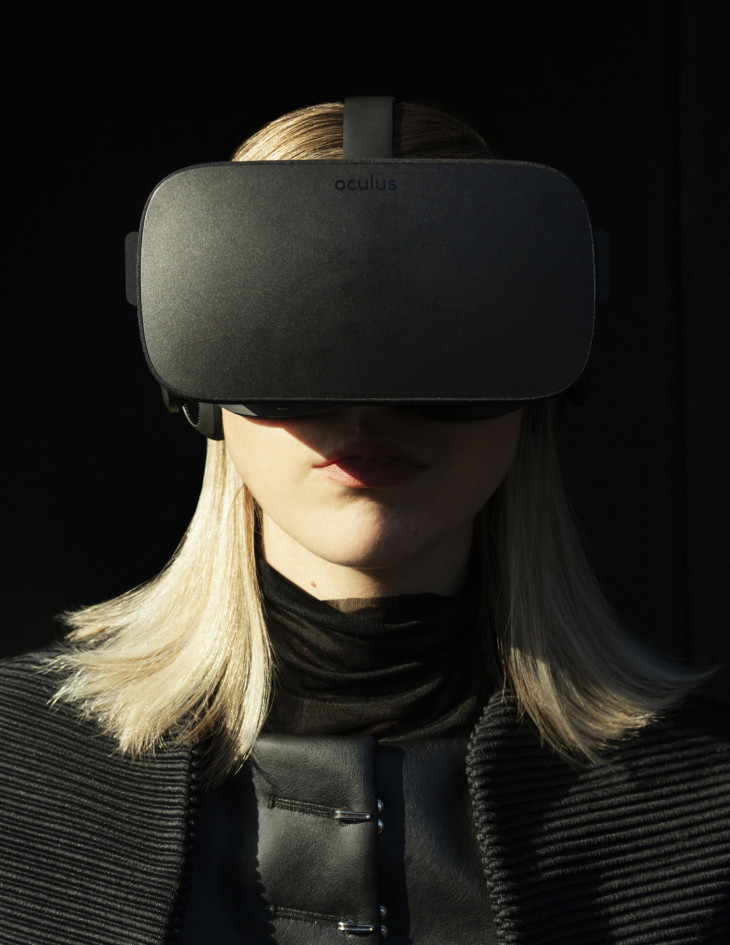 ELIZA MCNITT EXPLORES THE SOUNDS OF THE UNIVERSE THROUGH VIRTUAL REALITY

“For thousands of years, we’ve looked to the stars to find our place in the universe,” says the writer and director Eliza McNitt, “but for the first time, we listen to its music.” With help from an original score by Stranger Things composers Kyle Dixon and Michael Stein, she is envisioning the way we interact with the sounds of the cosmos in Spheres, an immersive three-part virtual reality experience utilizing an Oculus headset and handheld touch controllers to place viewers in a computer-generated, 360-degree spherical display, seemingly floating through the cosmos. “This medium was the only way to truly make audiences feel as if they were plunging into a black hole,” she says, “or traveling back in time to the earliest moments of the universe.”

Executive produced by Ari Handel and Darren Aronofsky and presented by Protozoa Pictures, Spheres first gained attention when its middle chapter, “Songs of Spacetime,” narrated by Jessica Chastain, premiered earlier this year at the Sundance Film Festival—where it became the first virtual reality film ever to be acquired in a seven-figure deal—and was recently nominated for an Emmy for Outstanding Innovation in Interactive Media. That chapter placed viewers in the depths of the cosmos, watching the death of a star while experiencing the pull into the void of a black hole.

Then in May, the closing chapter of Spheres, “A Pale Blue Dot,” narrated by Patti Smith, premiered at the Tribeca Film Festival. As the finale to the trilogy, this section offers a homecoming conclusion, with Smith guiding viewers through the history of the universe, exploring the sounds of the Big Bang and traveling through the cosmos all the way back to Earth.

The series in its entirety will have its world premiere next week at the Venice Film Festival with the début of the opening installment, “Chorus of the Cosmos,” which is narrated by Millie Bobby Brown and explores the wonders of our own solar system. While each of the three episodes can be viewed separately as an individual story, the trilogy flows together as a complete look into the soundscape of space. McNitt was deliberate in choosing her narrators. “I wanted to tell a story about the universe from Mother Earth’s perspective and have the voice of these iconic women guide you on the journey,” she explains, “because they are the voices of the universe in my eyes.”

With Spheres, McNitt’s storytelling and creative processes are untraditional. Instead of a linear narrative, she had to create a fully interactive, 360-degree story that users can reach out, with their controllers in hand, and touch. “You build worlds that are full of Easter eggs of discovery,” she explains, “and it’s not like traditional storytelling where you allow the story to unfold. You have to craft and build a world that’s full of mysteries that you get to discover.” Although the options seemed limitless, she was cautious in how she introduced interactive elements, aware that for many viewers, Spheres would be their first experience with virtual reality. “It’s important that it doesn’t overwhelm or confuse people,” she says. “It has to be tangible so that they become as obsessed and mystified as I am.”

Before finding success in virtual reality, McNitt first discovered the power of narrative in high school. After becoming a two-time winner of the Intel Science Fair for her work on the disappearance of honeybees, she teamed up with her friend Charlie Green to produce a short documentary, “Requiem for a Honeybee,” which was later broadcast internationally on C-SPAN. “That was a pivotal moment for me because I realized that filmmaking had a huge impact and I discovered that science was storytelling,” she recalls. “I could tell narratives through science and, pouring my passion for science into these stories, I could reach out to such a wide audience of humans around the world.”

As she continued making short films, she found that the industry lacked an essential point of view. “I deeply wanted to tell stories about science that gave women thought-provoking and fascinating characters to portray,” she reflects, “and there certainly was nothing about science, especially for young women. So I really wanted to shatter the stereotypes of what you see on screen with stories about science.”

With Hollywood undertaking a big push for diversity, McNitt explains that the virtual reality community has always been inclusive since its inception. “I think one very important aspect of virtual reality has just been all the incredible women who are leading the way for young creators like myself,” she says. “You have this incredible group of people like [Oculus executive producer] Yelena Rachitsky, [Spheres advisor] Lisa Watts, [producing partner] Jess Engel, and [Google executive producer] Karen Dufilho-Rosen, who are the pioneers of this medium and they’re embracing young creators and young women and helping them to become established filmmakers in this space. I think that’s really exciting.” The industry lends itself to equal opportunity, McNitt continues, for breaking in as a new, young director. “What you don’t have in virtual reality is this legacy of film that has created boundaries for diverse creators,” she says, “so it’s very exciting to see that open up for people because now it’s just about what your story is and how strong your voice is. There are no other biases that hold people back.”

When discussing her rise in the industry, McNitt is quick to acknowledge the guidance she has received from mentors and partners. “I’m very lucky to have been taken under the wing by Protozoa Pictures and to have mentors like Darren Aronofsky and Ari Handel, who are so deeply passionate about science and to realize that what I love the most, science storytelling, is universal and accessible and has a place in this world,” she says. As she begins working on her next project, a traditional narrative feature, she offers some advice of her own for the next generation of talent: “Whatever it is that you deeply care about, if it’s science or engineering or whatever fascinates you, put that out in the universe, because you never know who’s going to see it and connect with it.”

Spheres will premiere in full at the Venice Film Festival. Spheres will be available on Oculus this fall.