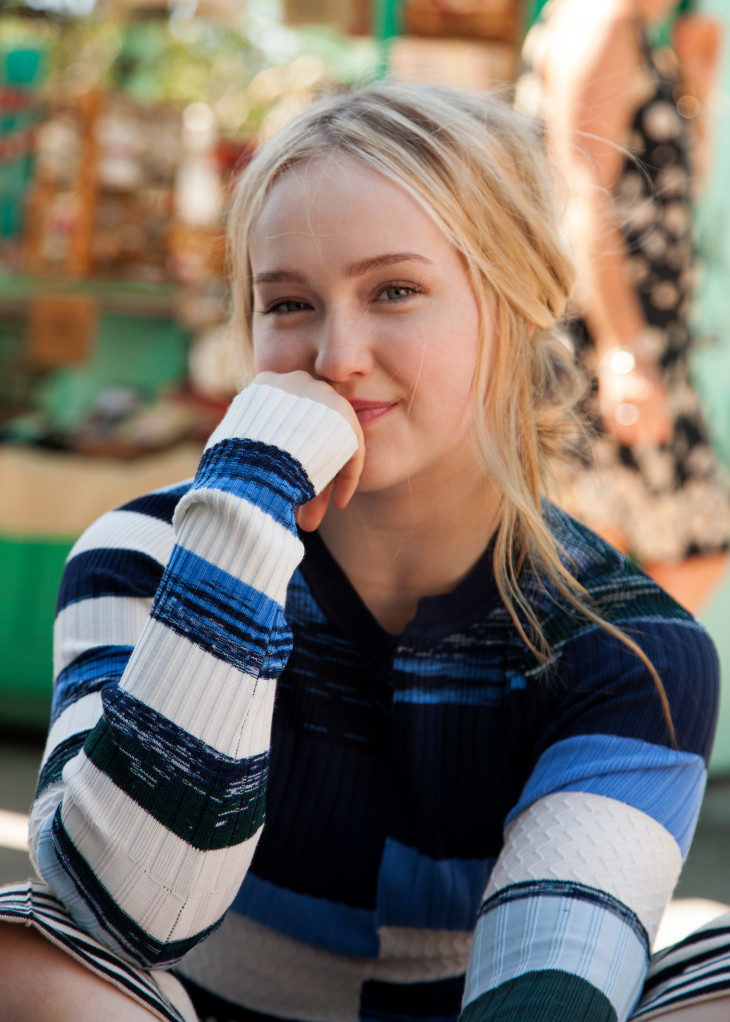 All clothing by Opening Ceremony.

In Sofia Coppola’s new movie The Beguiled, a simple but listless existence is disrupted when a Southern girls’s seminary decides to take in a wounded Union soldier during the Civil War. The film is character-driven, created around subdued performances by the cast—every glance, sigh, and movement is an expression of their inner desires. It’s the type of film any actor would relish, none more so than Emma Howard. At just sixteen years old, a part in an award-winning film (Coppola became the second woman in history to win for best director at Cannes earlier this year) itself is a dream come true. But as her first feature film, it’s only an introduction to a precocious young actor.

Howard began acting at an early age with a community theater group and was immediately hooked. “I was three or four years old and I remember just loving it and never wanting to leave rehearsal,” she recalls. “My parents practically had to drag me out. I don’t know what it was, I guess I was always in love with performing for people and being able to step outside of Emma and be somebody different.”

At twelve, she reached a major stepping stone when she made her Broadway début in the musical Matilda. She had a three-episode arc on the hit Amazon show Transparent, and now The Beguiled marks her most widespread role yet. But between all of her work, she still has to finish high school. “High school is crucial. There are so many different kinds of people, and nobody’s going to give you an easy time,” she explains. “Everyone goes through things, and as an actor you have to go through challenges with people and go through those real high school experiences.” All clothing by Arrive. Shoes by Christian Siriano.

She managed to channel some of those feelings into her performance as Emily in The Beguiled, despite the historic setting. “I had been in a lot of situations where you’re kind of in an enclosed space with the same people,” she explains. “I remember specifically being in Matilda with sixteen kids in one crammed dressing room. We were all just together and got under each other’s skin at times. And some of my strongest friendships came out of it, but I do remember being in that enclosed space and not really experiencing other kids.”

Prior to shooting The Beguiled, the cast—including Nicole Kidman, Kirsten Dunst, Colin Farrell, and Elle Fanning—took etiquette classes and improvised dialogue with each other to get familiar with their personalities. Coppola also gave the cast journals so they could write about their characters and their relationships with the others allowing Howard to find more depth in Emily, who initially seems more like the virtuous type. “I think she is this kind of goody-goody, but when the boys come around it’s a whole different story,” she says. “I accumulate Alicia’s [played by Elle Fanning] behavior, and they both flirt around.”

The movie itself is also in many ways a transformation. The Beguiled is a retelling of a classic film from a woman’s point of view, and it’s exactly the kind of story Howard is drawn to. “I was excited to see that new outlook and point of view. Sofia said that people always say girls will do anything to fight over a man and they’ll go against each other for a guy, and that’s the stereotype,” she explains. “And she wanted to show that if you mess with the women, then we’re going to give you what you deserve. We band together and work together to fight for us and each other.”

Even at her young age, Howard is highly conscious of both the need for and the value of work that defies conventions, and recognizes the potential for films to challenge that. “I’ve always been in love with Orange Is the New Black. They have a lot of stories, like typecasting criminals and police brutality, that need to be spread,” she says. “Also Transparent, about transgender families and what it’s like to have judgment. I feel like a lot of judgment is going on and an end needs to come to that. Prejudice needs to end, and I love working on shows like that.”

But Howard isn’t just waiting around for those kinds of scripts to come to her. She’s focused on learning directorial skills, the key to which is, according to her, observation. But writing is even more of a passion, and Howard is keen on developing original scripts of her own. Her foray into writing goes back to her Matilda days when she collaborated with a friend, though back then there was some youthful oversight. “We were writing a script together because we were obsessed with Carrie and we loved the story. We were like, ‘Oh my gosh, we should write a sequel,'” she laughs. “So, without knowing there already was a sequel, we wrote our own sequel and had everybody hear about it. We went on thirty-minute tangents about our script to people and how excited they should be about it.” But now that passion has only strengthened, and Howard is determined to use her insight and experiences to fuel her work: “I think writing has a lot of power. It could spread awareness about things that I would love to talk about and bring up as conversation.”

Though she’s still young, Howard’s deep appreciation for the arts of acting and filmmaking is already driving her career. With her preference for seeking out untold stories, she’s bound to find the very type of projects people are desperate to make and consume right now. “I think telling stories is really also a privilege—being able to spread awareness about somebody and about a certain problem or something in the world that’s happening,” she says. “And I would love to spread awareness through what I love to do. I think it’s really amazing to be able to do that.”

The Beguiled is out now. Jacket by Coach 1941. Shirt by Simon Miller. Shorts by Philistine.