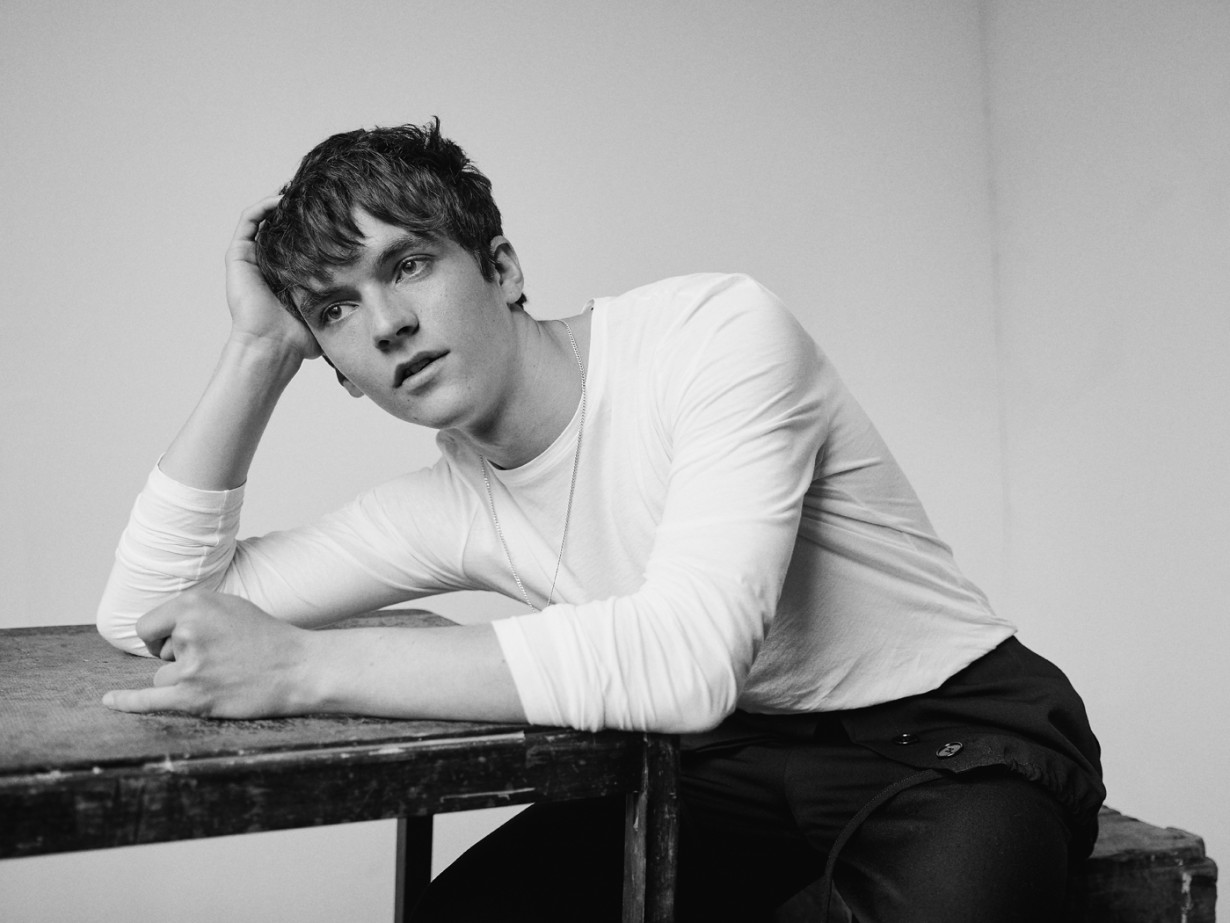 Top by Burberry. Trousers by JW Anderson. Whitehead’s own necklace, worn throughout.

For any young actor, making a screen début as the title character in a dark and unconventional television miniseries would seem to be enough excitement for one year. But not for Fionn Whitehead, who, even while filming that auspicious start in the supernatural ITV three-parter HIM last spring, found himself enmeshed in the clandestine, months-long audition process for Christopher Nolan’s gripping and evocative new World War II film Dunkirk—and eventually emerged as its young lead. “I think most actors would agree that it’s easier to audition when you’re already doing something, because you can’t have the audition occupy all of your mind,” Whitehead says. “But it was still Chris Nolan, and I was still quaking.”

Practically unknown beforehand, Whitehead now finds himself as the literal poster boy for one of this summer’s most anticipated films, a powerful new work from the famously secretive director of The Dark Knight, Interstellar, and Inception also starring Tom Hardy, Kenneth Branagh, Cillian Murphy, and, as you may have heard, One Direction’s Harry Styles. Set for release this Friday after months of speculation, Dunkirk stars Whitehead as Tommy, a private in the British Army trying to make his way off the battlefield back home. “We didn’t know anything,” he recalls of the audition process. “We didn’t know what the script was, how many roles there were, what the roles were. I was going into auditions and I was waiting in waiting rooms with actors twice my age of different nationalities. You really just had no idea right up until the end.” That furtiveness lasted long after Whitehead secured his part as well, as he had to keep quiet even as he continued working on HIM. “I was finishing HIM at the same time, and they were all so interested in how it was going because they bent over backwards to let me go to these auditions,” he recalls. “They kept asking me, but I wasn’t allowed to tell anyone. Every day, they’d be like, ‘Have you heard anything?’ and I’d just have to be like, ‘No, it’s not looking good really.’ And they were like, ‘That’s fine, never mind, there’ll be plenty more.’ I just felt so guilty.”

Raised in Greater London as the son of a jazz musician, Whitehead, now twenty, is no stranger to the vagaries of the artist’s life. “Everyone knows that going into any creative industry is hard to get started,” he explains. “It’s hard to break out in, it’s hard to make money in. My brother and sisters and I were always encouraged to do what we wanted, but we knew the realities of the situation of going into something like that. My sister’s a musician and my other sister trained in dance, so my parents used to always make the joke, ‘Could someone just become an accountant?’”

With Dunkirk on his CV, Whitehead’s future in the industry seems secure, but his out-of-nowhere story belies years of passion and hard work. As a child, he joined the National Youth Theatre and spent years in amateur theater before leaving high school to focus on auditioning while working as a barista. After being rejected everywhere during his first round of applications to drama school at seventeen, Whitehead was preparing to reapply when he landed the role in HIM, helping crystalize what had been a calling since childhood. “I think for everyone that starts doing acting, the initial draw is to making people laugh,” he says, “and then as you go on, it becomes the whole thing of adopting different personas. Being able to put yourself in other people’s shoes and understand different ways of living has always fascinated me. I was really into history and sociology at school, and being able to take stuff outside of your own experience and try to see from someone else’s point of view was very interesting.” In Dunkirk, that someone else would be a teenage soldier caught in one of military history’s most famous evacuations. To prepare for the role, Whitehead visited museums and researched diary excepts and letters from the time, and took the opportunity of two extra weeks of training in Dunkirk itself before filming started to get to know the land. “I was just imagining how I would react to being in a situation like that,” he recalls. “They weren’t prepared for the things they came up against. That’s the thing that’s obvious when you read these accounts, no one really knew what to expect. They’d been told, but I think until you’re in a situation like that it’s impossible to be ready. The sheer terror of going through something like that I think is the hardest thing to connect with.”

Still, Whitehead says that, despite its setting, he wouldn’t describe Dunkirk as a war film—he sees it as more of a “suspense thriller because it focuses much more on the personal than the political”—and certainly not one in the typical patriotic and self-celebratory vein. “One of the parallels people have said to me is that it’s a war epic, like Saving Private Ryan, but I think a big difference is that Saving Private Ryan is very much an all-guns-blazing, heroic film, whereas this is all about survival,” he explains. “These kids are trying to get home. I think it’s very honest about the realities of war and they’re just really scared and trying to survive. As opposed to going in on the attack, it’s much more about escape.” After the heavy emotional and physical toll of filming Dunkirk—he spent many summer days swimming through the ocean in full military uniform including a wool overcoat—Whitehead passed the remaining months of 2016 working on The Children Act, an adaptation of an Ian McEwan novel directed by Richard Eyre and starring Emma Thompson and Stanley Tucci due out later this year. He plays Adam, a young Jehovah’s Witness who refuses a necessary blood transfusion for religious reasons, in the High Court drama. “I was very keen to go from Dunkirk to that because they’re such opposite ends of the spectrum,” he says. “It was really challenging, but in a different way.”

Still living in southwest London, Whitehead has spent much of the first half of this year back on stage, making his professional theater début as a very contemporary teenager in Natives at the Southwark Playhouse. “It’s completely different to doing film and TV work,” he says. “I don’t think one is better than the other, but it’s good to have a healthy balance.”

And whether he finds himself onstage or onscreen, in 1940 or 2017, Whitehead, even at such a young age, seems to understand intrinsically how to slip smoothly into any role. “I think whenever you play a character, there’s an element of yourself and you have to find the character in yourself,” he says. “It’s taking the character and deconstructing it and seeing how to take it into your own personality.”

Dunkirk is out Friday.