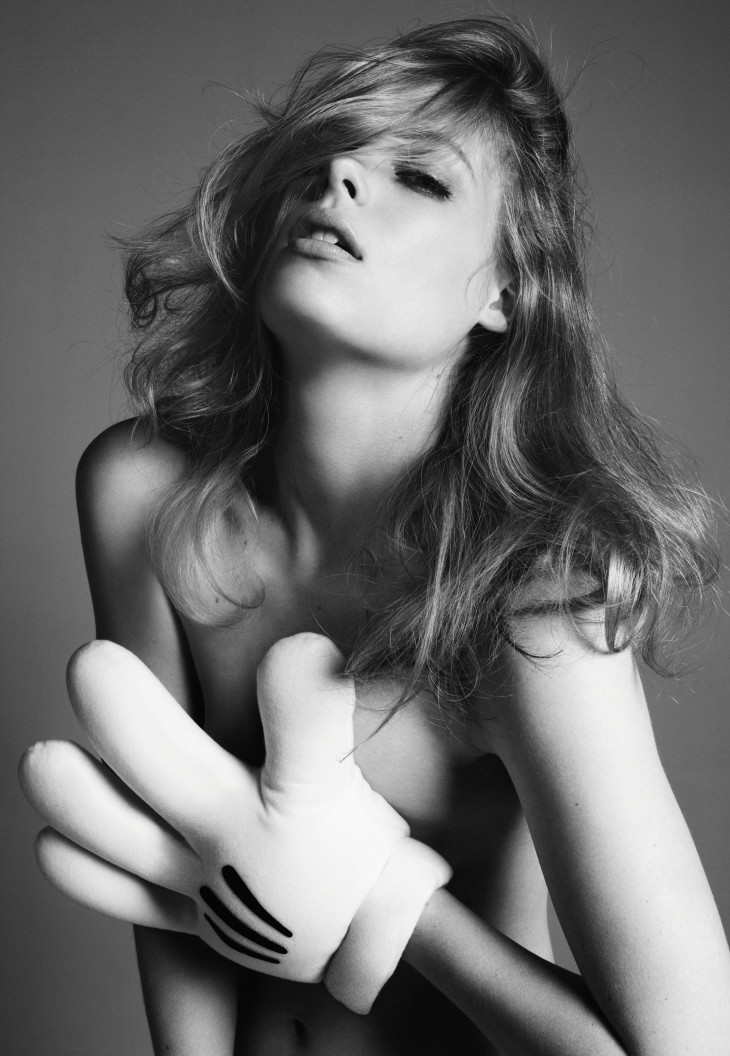 Originally published in the Fall 2008 issue.

My name is Cherry Daiquiri,” says the stealth blonde stripper writhing on a bar in the first twenty seconds of the trailer for Choke, which also stars Sam Rockwell and Anjelica Houston. American actress Gillian Jacobs is almost nude in five-inch heels when she pauses, bends down, looks her client straight in the eyes, and informs him with a twinkle, “It’s not my real name.”

Jacobs is low-key, cerebral, and very particular about the information she chooses to absorb. Google will tell you nothing about her. Maybe it’ll tip you off to her Wikipedia page, which describes her simply as an “American stage and film actress,” highlighting her hybrid career thus far. Her tastes were chiseled at an early age. It was 1993 and Jacobs remembers twirling out of her local mall as a kid after seeing Much Ado About Nothing. She was spitting out fake iambic pentameter lines and fantasizing she was Emma Thompson. She was hooked, a pure Shakespearian junkie. Katharine Hepburn was another obsession. “I fell in love with these feisty, literate, intelligent women,” she says.

At eight years old, the hungry tyke started scanning the local papers for auditions and made her first appointment. She panicked before entering the building. “I got terrified,” she remembers. “‘I can’t do it, I can’t do it,’ I pleaded to my mother, ‘I haven’t taken acting classes long enough!’” Mom gave her a tough love talk on the street and pushed her in the door. “I got the job!” she chuckles. “But it was my first play and it kind of set me up with an unrealistic expectation of life.”

The road would be long but it would be full of love and education. Mount Lebanon was a comfortable cushy neighborhood. But before you make an assumption about her pillowed childhood, she cuts a left turn to reveal a maverick side. “I think the thing that helped me out a lot was doing theater growing up, and going into the city, meeting kids from different parts of Pittsburgh rather than just staying in Mount Lebanon,” she says. It was this diverse group of outsider friends that inspired her to push the envelope in a sheltered one-dimensional suburb.

On the side, Jacobs’s supportive parents were also proud owners of a brewery for over 100 years. “It was right before the rise of the microbrews,” she says. “[My family was] trying to hold out during the rise of Budweiser and national brands, but as with anyone in the brewing industry, all the small, local, family-owned breweries around the country were closing.” Nevertheless, the product pumped through her family’s blood. “My grandmother cooked everything with beer. It was in every single dish somehow. And my mom would set her hair with beer cans. How to cook everything with beer—that’s what I learned as a child!” Finally when she reached the right age, Jacobs applied to the prestigious Juilliard School in Manhattan. She squeezed herself into the coveted classes using her excellent Pittsburgh school stripes and bid farewell to her parents and her kitty Grimalkin (named after a Shakespearean character), marching down her yellow brick road to New York.

Since then, she’s nabbed some TV work and a string of indie films, all revolving around some very dark characters. Blackbird saw Jacobs as a teenage runaway who falls in love with a heroin-addicted Gulf War veteran. Choke is more of a dark comedy, but still finds her playing a stripper in love with a chronic masturbator. She just finished shooting The Box with Donnie Darko director Richard Kelly, which stars Cameron Diaz and deals with the morality of killing a stranger for money. But her toughest role was for Gardens of the Night, alongside John Malkovich, in which she played a young girl abducted as a child, forced into prostitution, and living on the streets. It was a big stretch from her nurturing past. “To try and capture all of that, the homelessness, the history of abuse, and the drug use… It was very different from what I knew,” she says. Keep in mind she was cast one week before the shooting, which didn’t leave much time to prepare, but that’s how Jacobs likes to work. Throw her in the deep end and watch her swim.

Not one to shy away from a challenge, the eager thespian dives into theater with equal abandon. She works alongside the crème de la crème of stage veterans to absorb their experience and hope the magic dust rubs off on her. Her latest play, Stephen Adly Guirgis’s The Little Flower of East Orange, puts her under the tutelage of mentor and costar Ellen Burstyn, and under the direction of Philip Seymour Hoffman. “I’ve always wanted to do well by him,” she confesses.

Juggling both film and theater has worked out in Jacobs’ favor. Independent film can take a few weeks to shoot but a year to hit theaters (if the film is lucky enough to get bought). “Doing a play is a really great antidote to that,” she says. “It kicks your ass in an entirely different way. You have that feeling that people are seeing you. You don’t have to wait until the film to get edited, or for it get into festivals, or get distribution.”

As far as seeing her in person, don’t count on it too soon. You’d sooner catch the sexy bookworm in an oversized sweater, sinking in her chair at Film Forum than out on the town with rough-and-tumble young starlets. “I fall closer to the private end of the spectrum,” she says. “No one’s hounding me yet.” Yet is indeed the word.