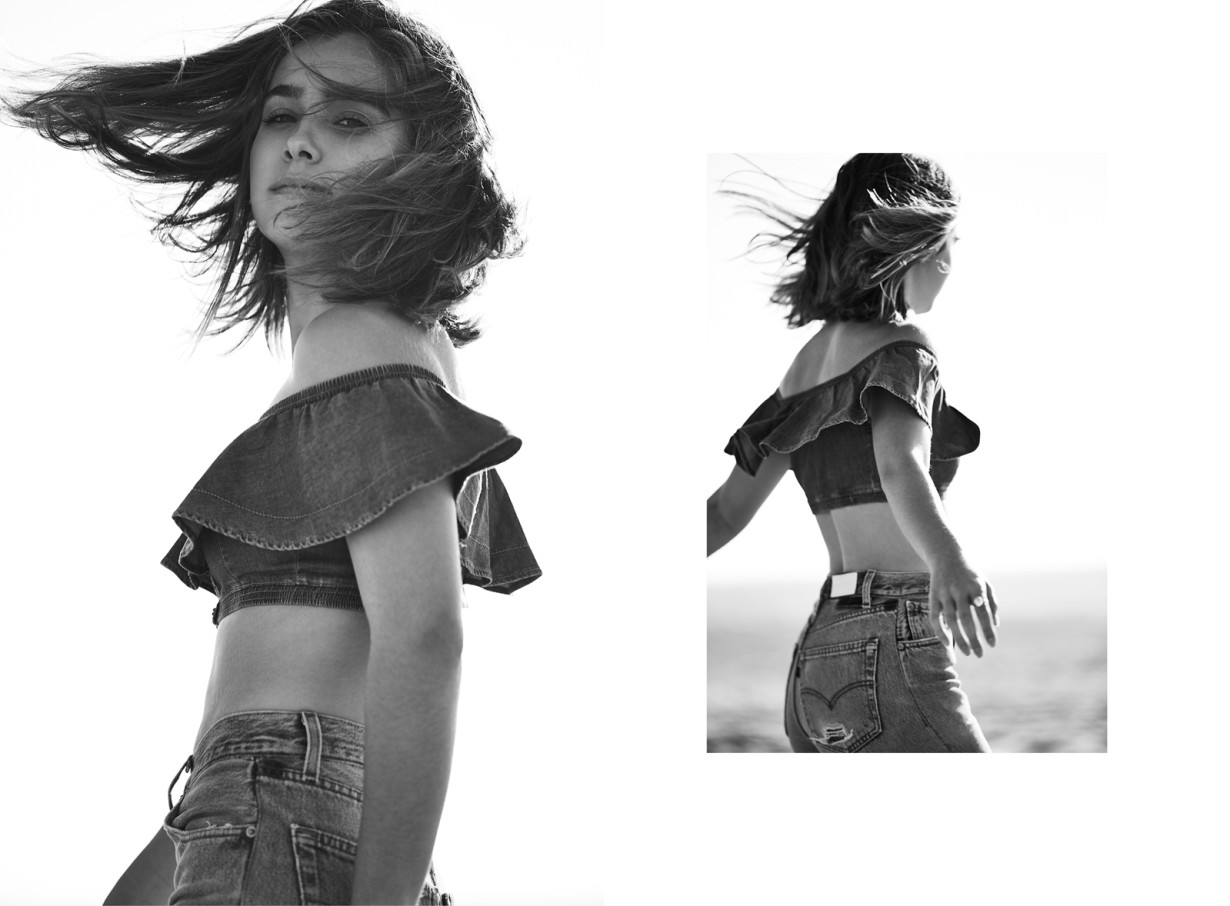 Styling by Sean Knight. Hair by Ramsell Martinez at Streeters. Makeup by Jen Fiamengo at Walter Schupfer Management using Make Up For Ever.

Apart from her high-profile career and her ascent within it, Haley Lu Richardson seems like a typical 21-year-old. She goofs around with her friends, reads books on spirituality, and shifts back and forth between fulfilling the responsibilities of adulthood and remaining a kid at heart. But with a handful of prominent upcoming roles, including in the acclaimed new coming-of-age film The Edge of Seventeen, the actress’s youthful exuberance is guiding her to a breakthrough in Hollywood.

Richardson was raised in Arizona, and was a serious dancer growing up. “I danced for like eight or nine years,” she says. “I was super focused and committed to that; all I did was go to school and then dance and get no sleep. That’s when I learned about self-motivation and committing to something, and also about how much I love entertaining and telling stories. And I think dance and acting have those things in common.” During her junior year of high school, as her classmates were thinking about where they wanted to go to college and what careers they wanted to pursue, her instincts led her towards acting. “That’s when I realized I want to try this acting thing,” she recalls. “I didn’t really know what it was, I didn’t know what LA was like, or what acting even felt like, to do it at a deep, real level, but I just had this calling. I know it sounds cheesy, but I just had this really strong obsession with going after it and learning about it.” She convinced her parents to let her move to Los Angeles and her first film role came shortly after. She played a seventeen-year-old girl in a post-apocalyptic, drought-stricken world who got to save the day. “I was the hero, I was badass,” she exclaims, appreciative that the start of her acting career was so fulfilling. “I feel like it’s something that I do take for granted sometimes, the fact that I get these chances to play such interesting, three-dimensional people that aren’t just there to make a guy look funny or move the story along or be hot. I get those scripts sometimes and they make me so mad, and I don’t audition for them, but I get a lot of auditions where I really get the chance to be an actual human and explore someone that doesn’t fit in my type of stereotype. I feel like I wouldn’t love acting so much if I didn’t get to do that.”

Richardson’s bright-eyed demeanor has only helped her career thus far, where she has often had to play high-school-aged characters. “I really think there’s always something new to discover about that time in your life,” she explains. “Every time, I get an opportunity to go back and think about where I was when I was fifteen or sixteen and what I was going through and what I was feeling. It’s really cool because different characters bring different kinds of memories and experiences you actually went through at that age, and it’s a really complicated time.” Shirt by Elizabeth and James. Bra by Calvin Klein. Skirt by Prabal Gurung. All jewelry by Sophie Buhai.

In The Edge of Seventeen, Richardson got to explore that age once again as Krista, who begins to date her best friend Nadine’s (Hailee Steinfeld) brother. “I think Krista really made me think of how I was in friendships,” Richardson says. “I see myself one way as kind of being crazy, and I do weird things and make stupid jokes, and all my friends are embarrassed of me, like I’m the twelve-year-old of the bunch. But I feel like friendships and relationships—especially when you’re so young—you go through things and you kind of need that rock.”

Following The Edge of Seventeen, Richardson will have a major departure from her past roles next January in the new M. Night Shyamalan film Split, in which she plays a teenager who is abducted by a man who has around twenty-three different personalities. “It’s hard doing a horror film or a thriller where the stakes are so high that it’s life and death,” she says. “Because—knock on wood—I’ve never had a near-death experience. But it’s really easier than people think to just be moved by words and by imagination, and sometimes when words are written—and Night wrote such a specific story—when you read those words and imagine yourself in your situation, it’s kind of hard to not respond and not have an actual emotional reaction to that.” In another new twist for her, Richardson will also be appearing later next year alongside John Cho and Parker Posey in Columbus, in which she finds an unlikely connection with a Korean man who is stuck in Ohio. “Nothing really huge happens in the movie,” she explains. “You take a magnifying glass and zoom in on these two people’s lives and their timed meeting, and you see what unfolds, and see how they affect one another. I really appreciate films like that, that don’t have to be big and loud, that just silently show you what goes on in people’s lives.”

Despite Richardson’s growing prominence, she still retains her humble disposition. “I still don’t feel any more wise than when I first moved here,” she admits. “I feel like I’m learning new things every single day, and every time I’m like, ‘Wow I’ve figured it out,’ I go and shoot another movie and have another experience, and I’m like, ‘Oh wait, I didn’t figure it out.’ But I feel like also the point of doing something is learning. A privilege of life is being able to constantly learn and absorb things and observe people.” Her optimism may stem from her focused dance training, or from moving to Los Angeles before graduating high school, or from just simply being twenty-one, but with her newfound successes, there’s no reason for it to wane any time soon. Left: Shirt by Elizabeth and James. Bra by Calvin Klein. Skirt by Prabal Gurung. All jewelry by Sophie Buhai.
Right: All clothing by Isabel Marant.

Styling by Sean Knight. Hair by Ramsell Martinez at Streeters. Makeup by Jen Fiamengo at Walter Schupfer Management using Make Up For Ever.