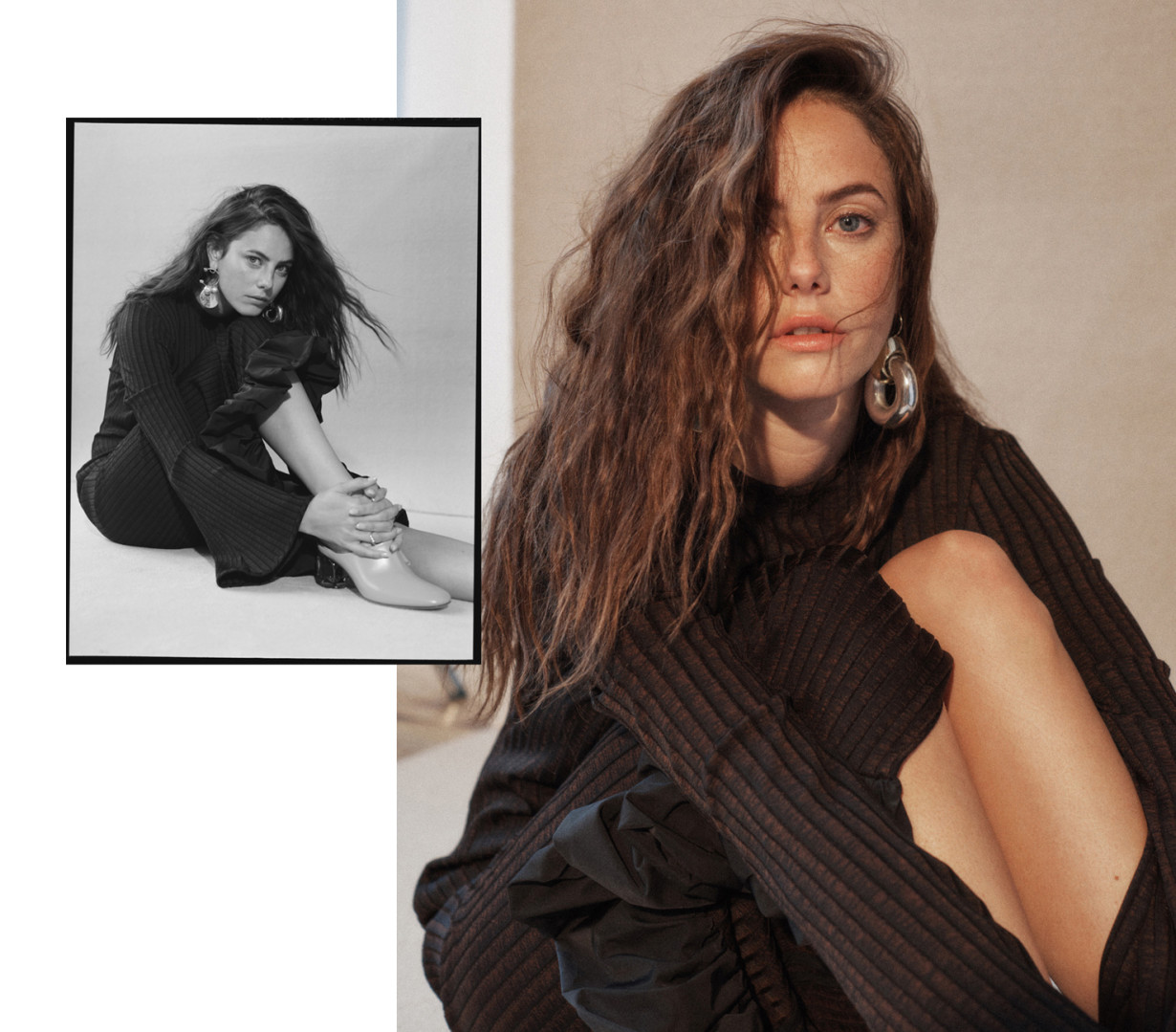 Dress and earring on right ear by Ellery. Shoes by The Row. Earring on left ear by 3.1 Phillip Lim. Rings by Elizabeth & James.

The first time we’re introduced to Kaya Scodelario in her latest role as Carina Smyth in Pirates of the Caribbean: Dead Men Tell No Tales, she’s locked in a jail cell. Holding the guard’s attention with her gaze and reciting an oath she has no intention of keeping, she deftly picks the lock before bursting out and making her escape. As the dandily-dressed British Redcoats pursue her yelling, “Witch!”, one thing is clear: If someone is the damsel in distress in this film, it’s not going to be her.

The role is Scodelario’s first turn at a truly massive Hollywood blockbuster, and it feels instinctively right for the British-born actress. Raised in council housing in north London by a Brazilian single mother—her father left the family when she was only one—Scodelario is used to being independent, and many of her characters are equally comfortable at navigating a tough world. Over the years, she’s established herself as a purveyor of smart, headstrong characters, from the precocious wild child Effy in Brit teen drama Skins to the telepathic Teresa in the dystopian Maze Runner trilogy.

Her first foray into acting began with Skins, when she auditioned for the role of Effy at the age of fourteen out of curiosity. “I’d never been to an audition before,” Scodelario recalls. “I didn’t know how you were supposed to audition. I didn’t know anything about the industry. I was just really passionate about acting and went to have a look more than anything. Then they asked me to come in and read.”

In some ways, the role gave Scodelario an alter ego. As a teenager, she admits she was “shy and introverted,” in contrast to Effy’s wild, femme fatale ways. “It was an interesting way of being a teenager, to experience it as myself but also as this completely opposite character,” she says. “I definitely didn’t have the experience that Effy did in life, and didn’t have the social life. [Playing her] gave me new context into different people’s lives and emotions and what they’re going through.” Top by Narciso Rodriguez. Dress, worn underneath, by Tibi. Earring by Ellery.

As the only character to appear across five seasons of the show, Scodelario, now twenty-five, credits Skins for putting her on the radar of directors such as the Academy Award-winner Andrea Arnold, who would cast her in her take on Wuthering Heights. On the day of her audition, Scodelario suffered from a bout of imposter syndrome and failed to turn up. Arnold was drawn by this contrarian behavior, which she thought would be perfect for the lead role of Catherine. The next day, she phoned Scodelario, asking if she could take her out for a drink. In the end, Scodelario went on to play a scintillating Catherine, whose passion for James Howson’s Heathcliff is matched only by the stoic strength she shows in holding him accountable for his actions.

It’s perhaps this fortitude that allows Scodelario to hold her own within each of the Maze Runner films, which introduced her to an American audience, as well as Dead Men Tell No Tales. In both, she is the only woman amongst an otherwise all-male ensemble cast. She says there was definitely a brotherly element to filming Pirates of the Caribbean, which had the potential to be odd at times. “If we would go out to the bar, they would all get very protective, which was like, ‘Okay, I don’t need eight of you to try to protect me,'” she says, laughing.

In Dead Men Tell No Tales, she’s also easily the smartest character in the entire movie—given her competition is an increasingly rambunctious group of pirates, the standard isn’t very high—but it was important to Scodelario that her character be more than just a love interest. “I personally think that she’s one of the strongest females that’s ever been in the series,” she says. “She’s from the opposite side of the tracks from [Keira Knightley’s] Elizabeth Swann. She’s on her own very personal journey, and she doesn’t need the help of anyone else.” In a sign of the expectations placed on actresses working today, Scodelario is often pressed on whether or not she considered Smyth would be a role model for young girls. “I get asked if it’s good to know that young girls are going to watch [Dead Men Tell No Tales] and look up to her, but I think it’s also important that young boys see this movie,” she says. “I have a son, and I think it’s great that he’s going to grow up seeing strong women.”

Somewhere down the line, Scodelario says she would love to use the recognition from bigger films to finance female-led productions. “I have so many amazing friends who are script writers and directors that have all these ideas and, unfortunately, don’t have the same opportunities as a lot of their male peers,” she explains. “I’d like to just sit down with them, have a bottle of wine, and see what we can come up with.”

And while Scodelario is the first to acknowledge the innate talent of every person she’s worked with, she’s also seen the way the dynamics change when a woman is in charge, thanks to working with Arnold. “Andrea gave me a great piece of advice as a woman when she said, ‘If you’re on your period and you’re grumpy, then your character’s on her period and she’s grumpy, and that’s okay,’” says Scodelario. “A man wouldn’t have said that.”

Pirates of the Caribbean: Dead Men Tell No Tales is out now. Dress and earrings by Loewe.